Low white clouds draped each mountain valley much like a covering of new fallen snow. The storm front was passing and after a brief but peaceful interlude a bright flash of lightening was followed by a blast of thunder that shook the house, (fifth wheel). The rain that followed was tropical and came in sheets that blew sideways in the incredible  gusts of wind.

It slowed a little and Renita went outside to take some images of the Caribou Mountains. Another wave of rain and small hail chased her back inside and she told me she had taken an image of a white narrow funnel that extended from the clouds to the ground. She didn't see any rotation so we thought it must be a narrow column of hail. 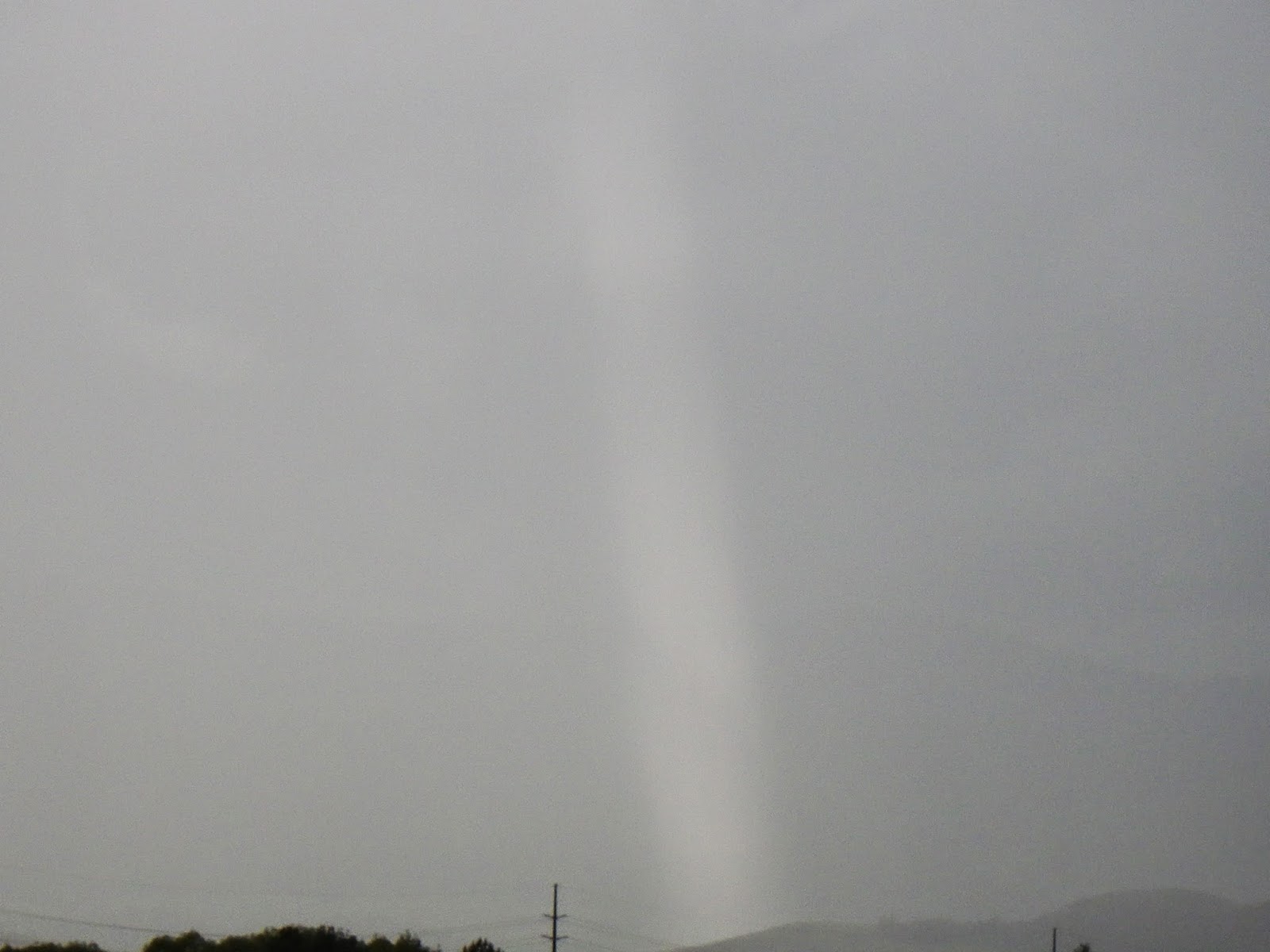 Another tropical wave of rain and it really did come down in torrents that surely would worry anyone about the possibility of flash floods that were camping near a stream. Luckily we are a long way from any area of potential flooding, avalanche, or mudslide, ( Our main concern here is the ever present possibility of an earthquake). 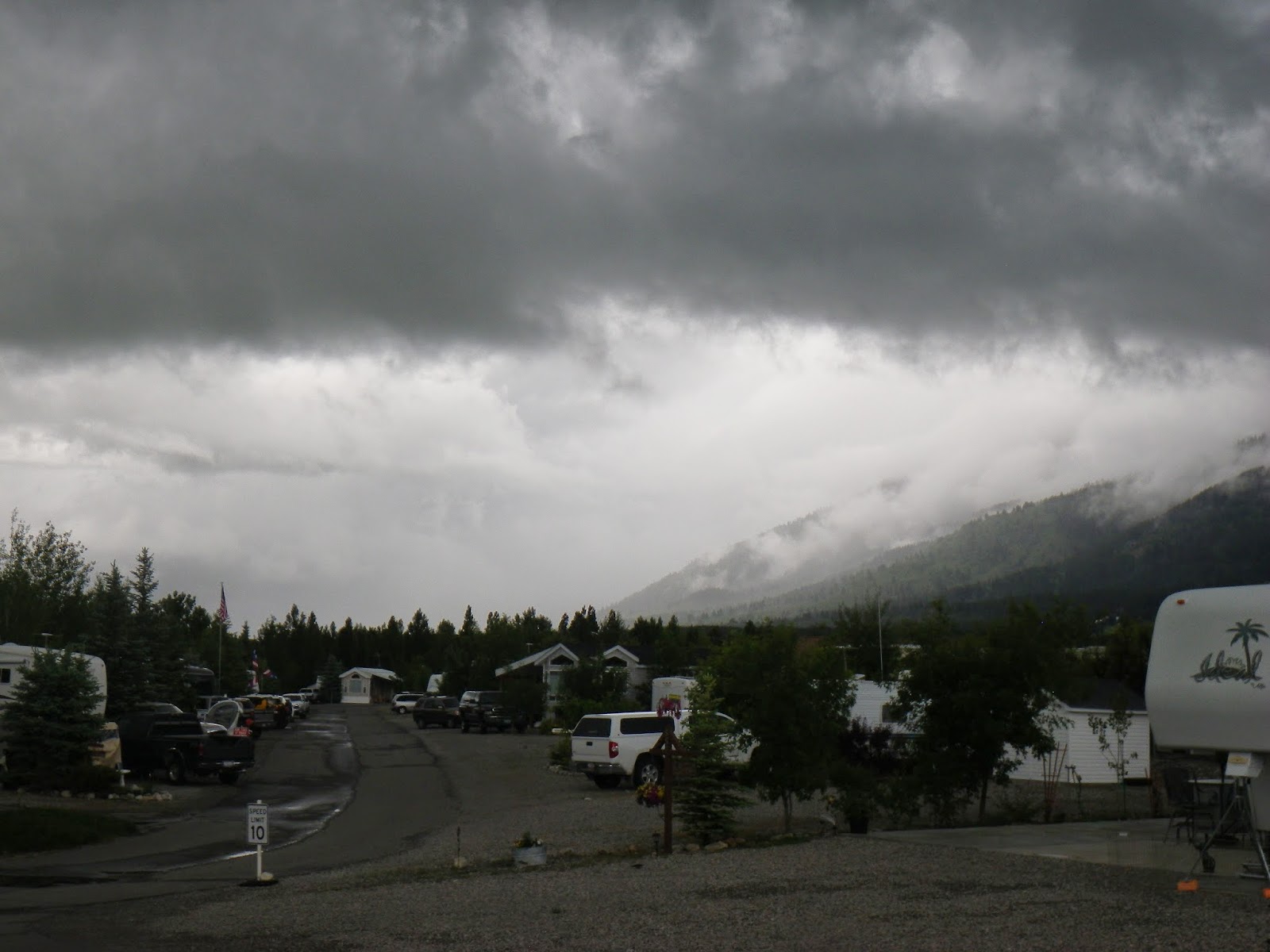 The storm finally passed and several days of beautiful skies are forecast. Fishing is really nonexistent right now as the streams here are still muddy and swollen from lasts weeks snow storm. This is without today's strong storm. 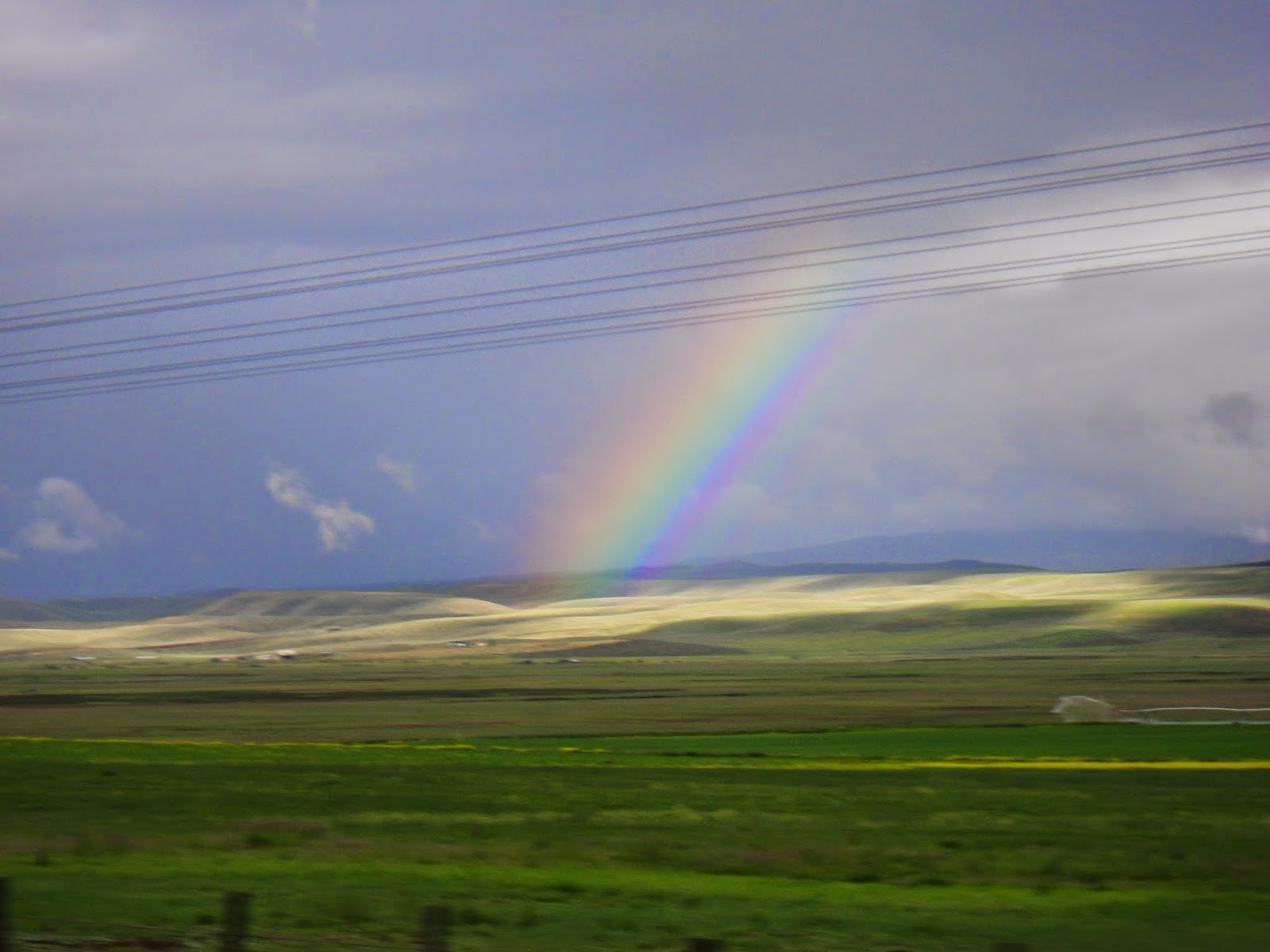 Friends are coming here in early August for five days of kayaking and fly fishing and the steams should be fishable by then. At least all the strong storms are giving us time to get our summer chores done and the list of must do things whittled down. The winter travel season is always present in our minds. Clear skies 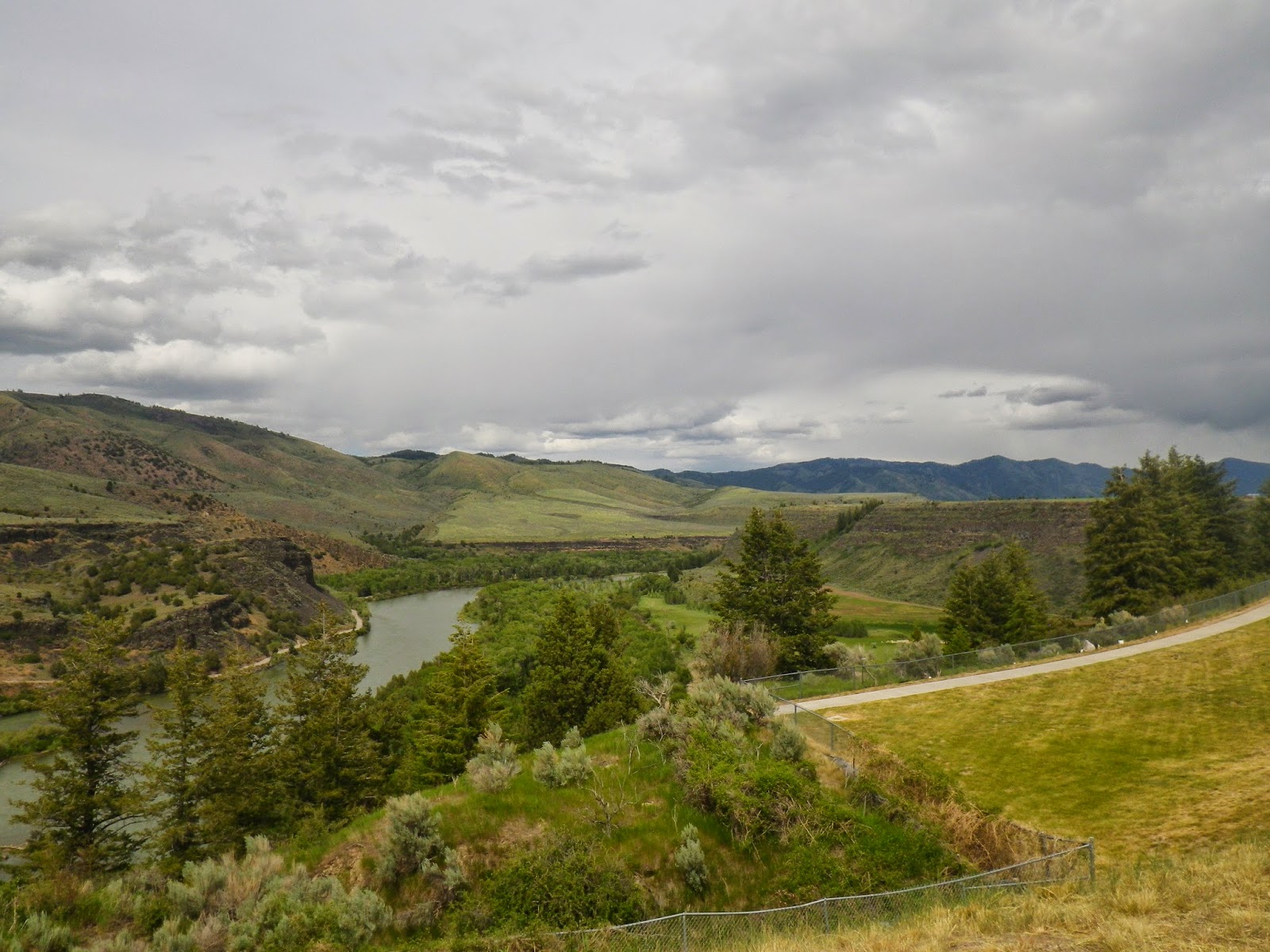 Here in Star Valley, shopping is a somewhat complicated. We do have a small grocery store nearby in Thayne. There are also two more in Alpine and Afton, but none of them carry many of the brands we use. Because of this we typically drive, once a month, to Idaho Falls as it is the nearest Walmart, (a one way distance of about 100 miles).
Its a pretty drive first to Alpine, then past Pallisades Lake, and finally down the Snake River Canyon to the Snake River plain. The plain formed as the Yellowstone hot spot burned its way through the North American plate as the plate moved west.
Lava flows dominate the plains landscape, except for the ever present potato fields, ( potato's are really cheap here). Produce stands also are opening up right now and the price of locally grown Idaho cherries has dropped to two dollars a pound in one store so its time to stock up. We are both waiting for the flood of fresh peaches and even plan to can some this year for our winter travels. 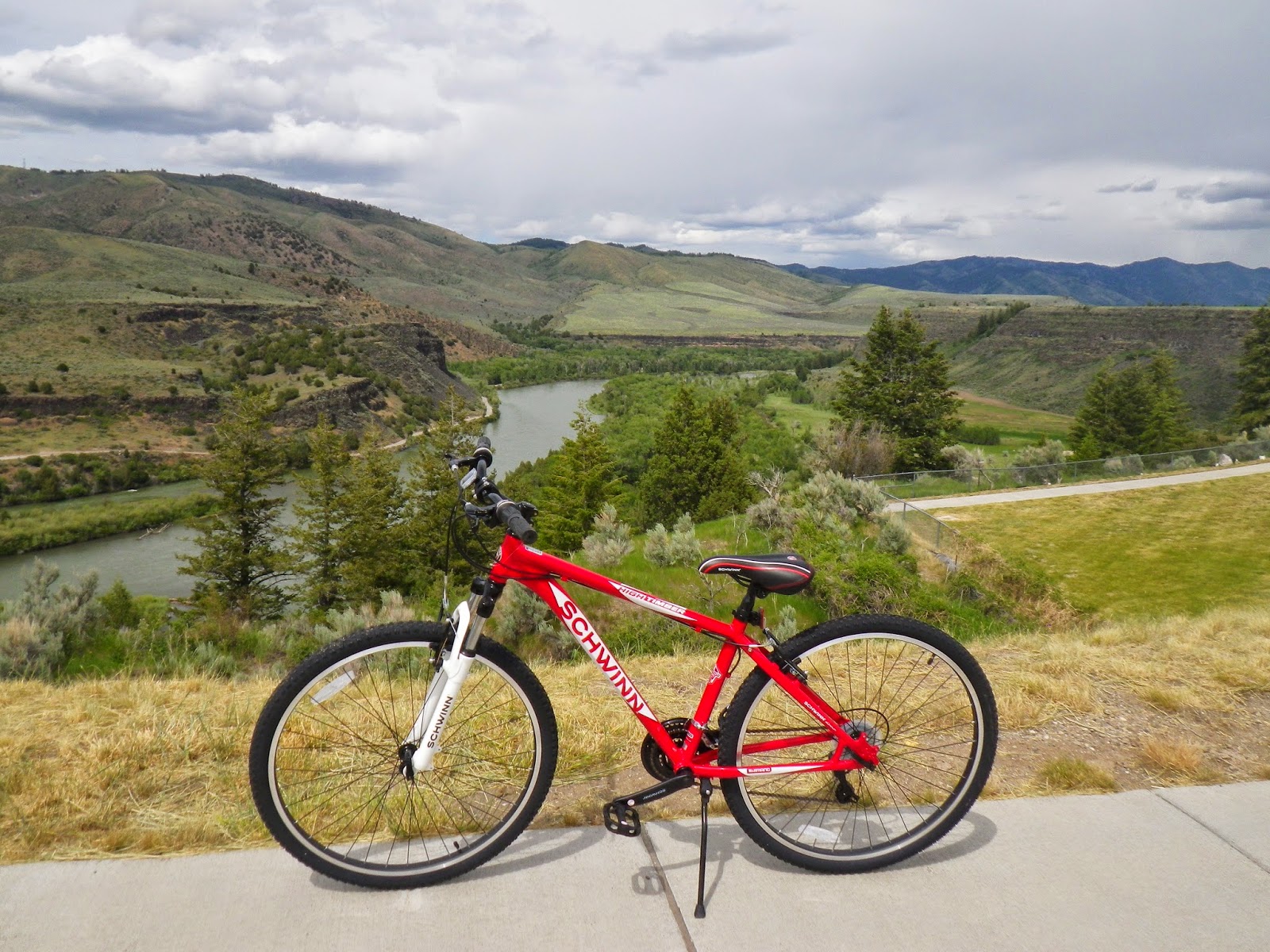 In Idaho Falls we fill our prescriptions and do all the big city stuff, ( sixty thousand people), Besides Walmart, there are several chain grocery stores including our favorite, Fred Meyers. Fred Meyers stores are kind of a western institution, that have just about everything one would need including bikes, (I finally bought a bike). Lowes and Home Depot are also present along with all the major chains.
The rivers are still too high and muddy to fish, (the mountains had a major winter storm last week), and so its still a good time to do our shopping, golfing, and making jewelry for the next shows. Hopefully they will clear up by mid July. Clear skies
Posted by Doing It On the Road(Part II) at 4:54 AM 1 comment: 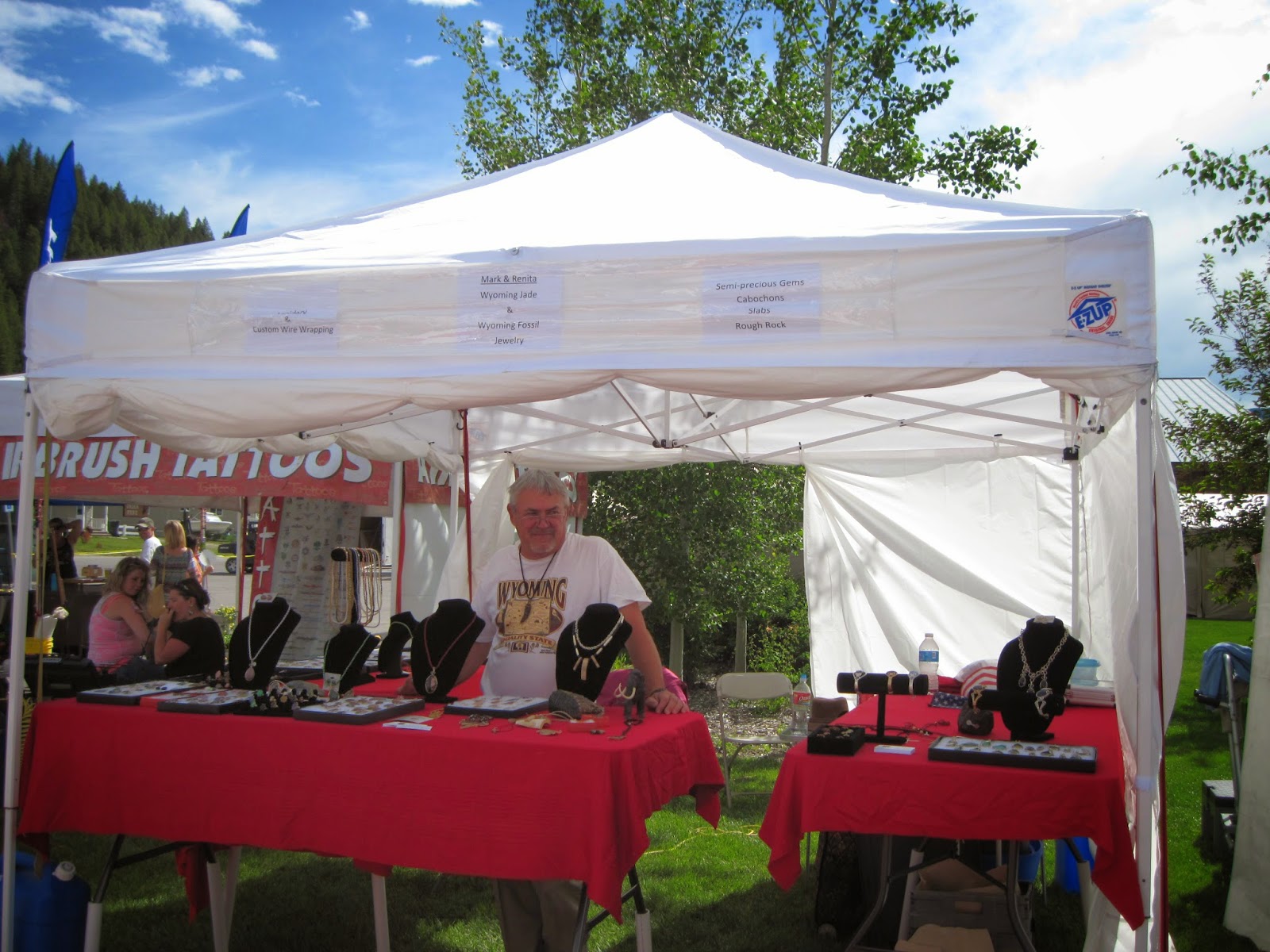 Every year Alpine, Wyoming has a Mountain Days celebration with sites for vendors to display and sell their wares. We enjoyed the event last year an decided to apply for a spot. Now this would be our first outside show and so we had to prepare for it by buying a canopy tent and tables. We also had to be a bit lucky and keep our fingers crossed for good weather.

It snowed heavily the weekend before the celebration but the forecast was for warming temperatures and light winds with little chance for rain. On Thursday we checked in and set up to find out that we would be right across from the food vendors. Not knowing if this would be good or bad I saw the menu and  we decided that at least everyone would pass our booth. 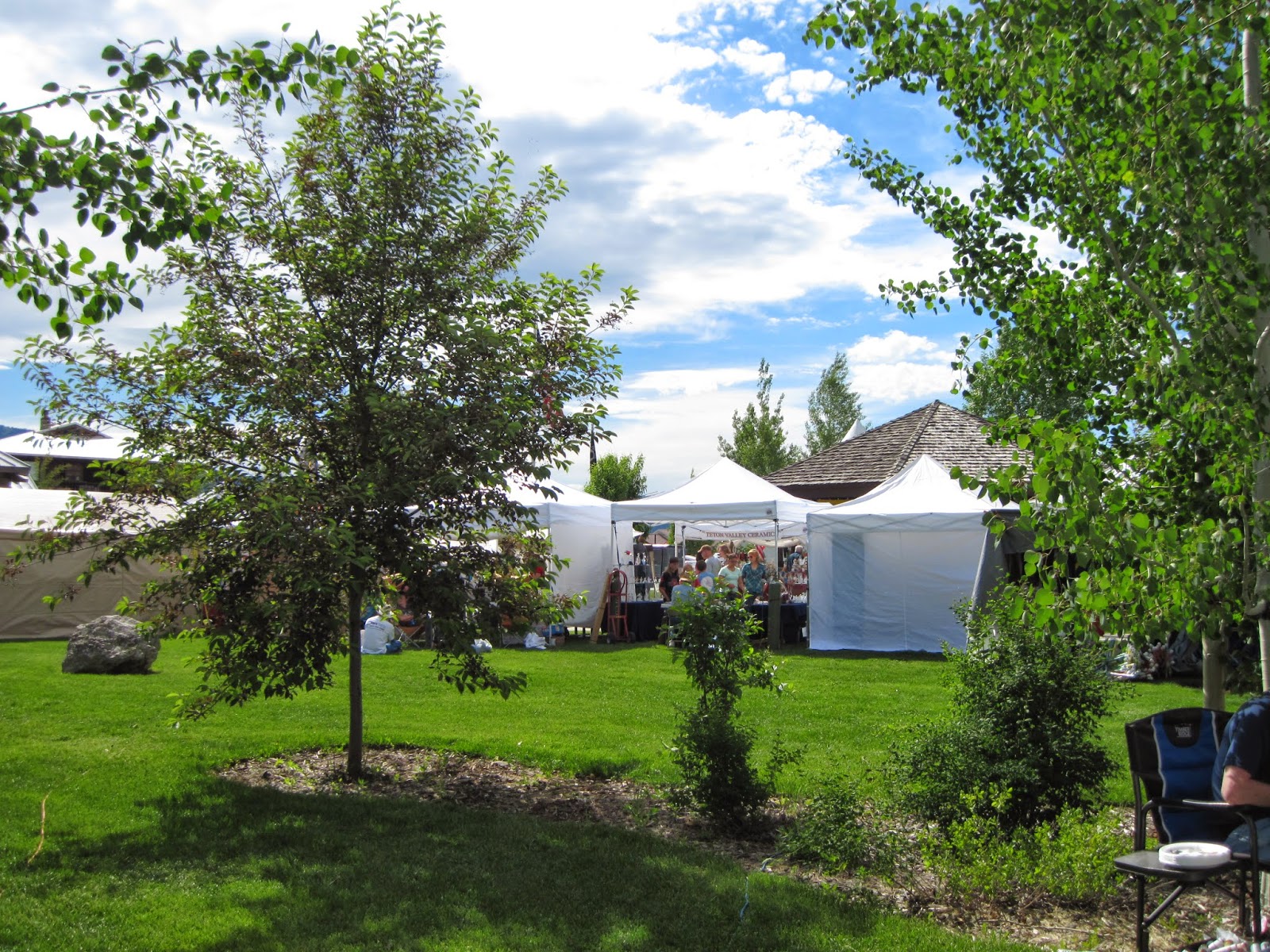 Next to us was a painter who painted feathers with beautiful images of wildlife and on the other side was a vendor, who spray painted tattoos. The beer tent was also close by and well I will tell more about the the effects of alcohol and the locations of the tattoos that people had applied.
The first day of the three day event arrived and we waited patiently as ten o'clock arrived. Almost immediately a man showed up and bought some of our Dry Creek Agate. A little later we sold several pieces of dinosaur bone and we both relaxed as people loved our work. The show slowed as the afternoon wore on but we had had an okay day. We hoped for a big day on Saturday.
The slow time allowed us to walk around and talk with the other vendors and I fell in love with one of Jim Dunn's hand napped knives. His prices were really low and his scrimshaw decoration was every bit as good as any we had seen in Alaska, so I bought one for my personal collection, ( It has a handle of elk bone with scrimshaw of a mountain lion, and is napped from mahogany obsidian). 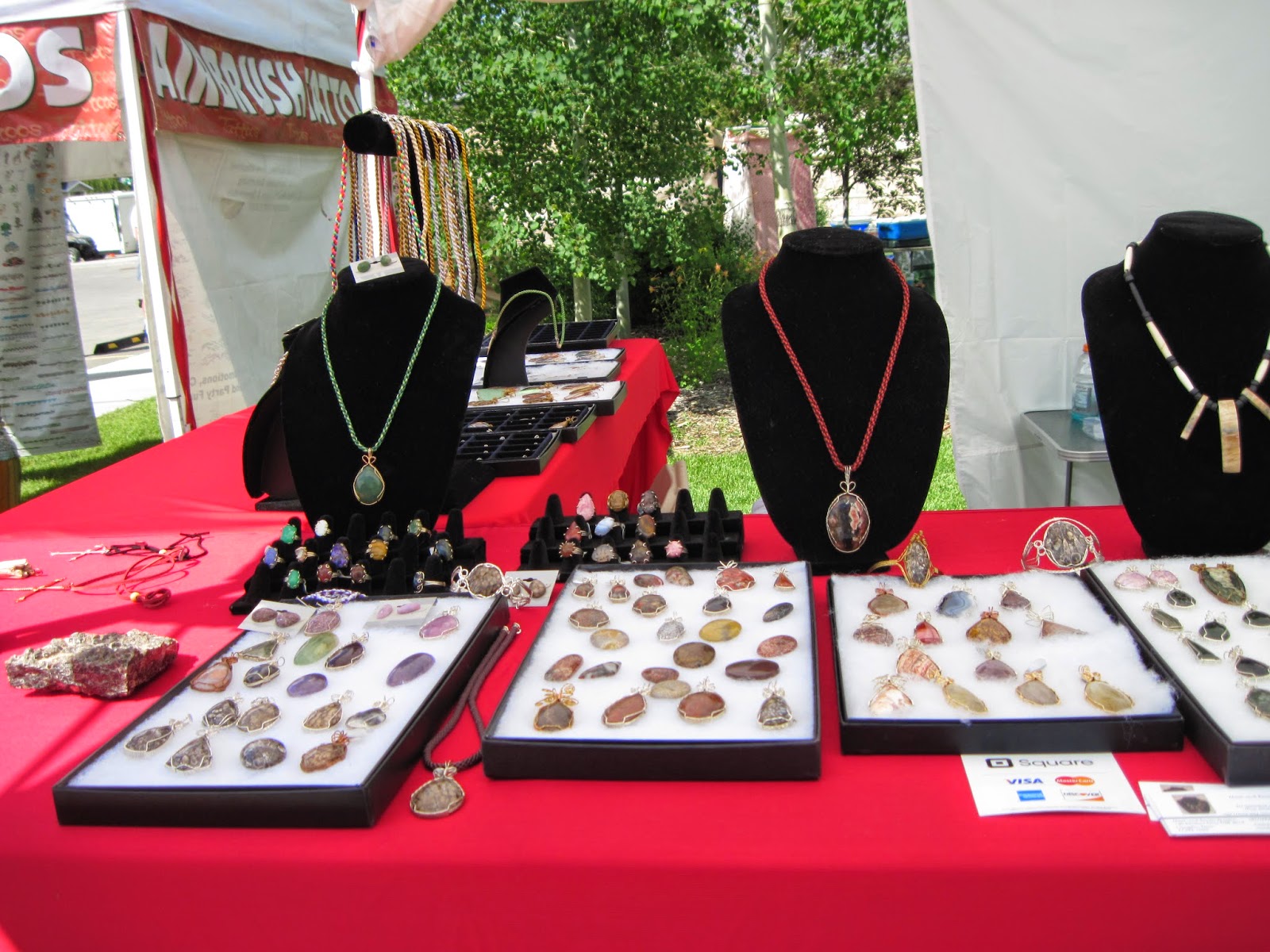 Saturday morning also started out slow and we were both a little nervous. Around noon the crowd of people increased and suddenly we were swamped. People loved our Wyoming jade pendants, our new style bracelets, our cabs, and slabs, and fossil fish. We barely had time to eat a sausage on a stick, a quesadilla, and a huge mound of deep fried ribbon potatoes, (I even tried a funnel cake and suffice it to say I have no plans on eating any fried food for quite a while).
On Sunday there was a smaller crowd but the beer tent again got busy and between customers we were able to watch as people started to bare unusual spots for the tattoo lady's air brush paint gun.There was nothing really shown that shouldn't be bared but it was close and we both laughed at the effects of too much alcohol, I am glad there weren't tattoos available when I used to imbibe).
The winds stayed down and so the three days passed without out any violent storms that blew down tents and vendors booth. The other vendors told us horror stories and so who knows how long our tent will last. Regardless we had a great show, in fact the best show we have ever had. Now if we could just learn Japanese, German, and Chinese we could tell our stories to the overseas visitors. Heck we still struggle with our Spanish! Clear skies

Our computer has died so we are using our smart phones for now. Ergo no new posts for a bit.

Mark and Renita
Posted by Doing It On the Road(Part II) at 3:52 AM No comments:

A Anniversary Day in Driggs 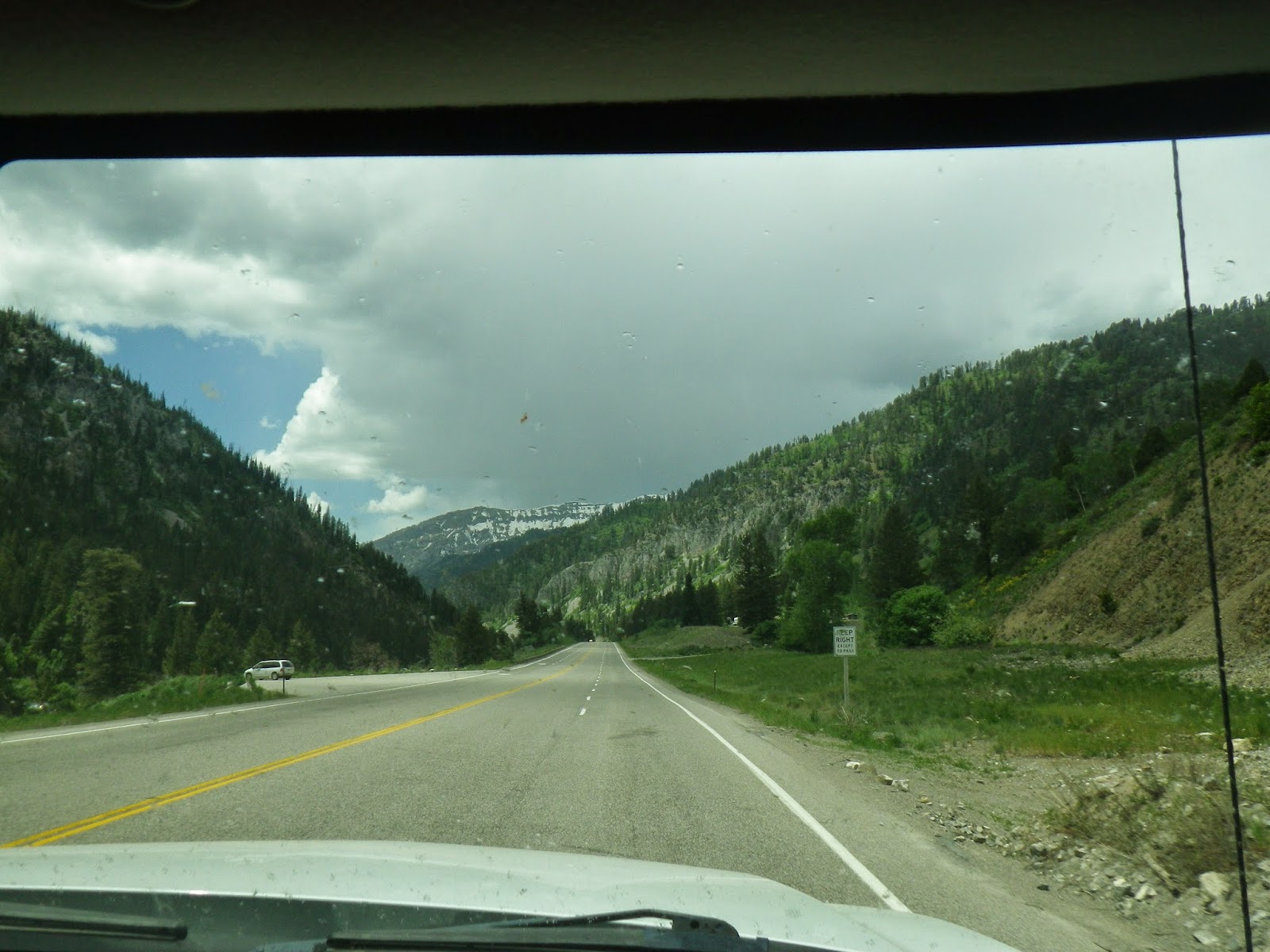 We decided to take a break from our busy schedule and drive to Driggs, Idaho. It was our anniversary, (forty three years), and one should always do something special on their special day. Never having been to Driggs,  we thought we would investigate the stores, maybe even look at bikes, and see the backside of the Tetons.
It’s only about seventy miles to Driggs from here, down to Swan Valley and then a narrow and winding road through the Big Hole Mountains,(size limit of forty two feet). There are so many mountain ranges here that it tends to be a bit confusing. About half way there a sign that told of the history of the area and that’s where we learned the name of the mountains. 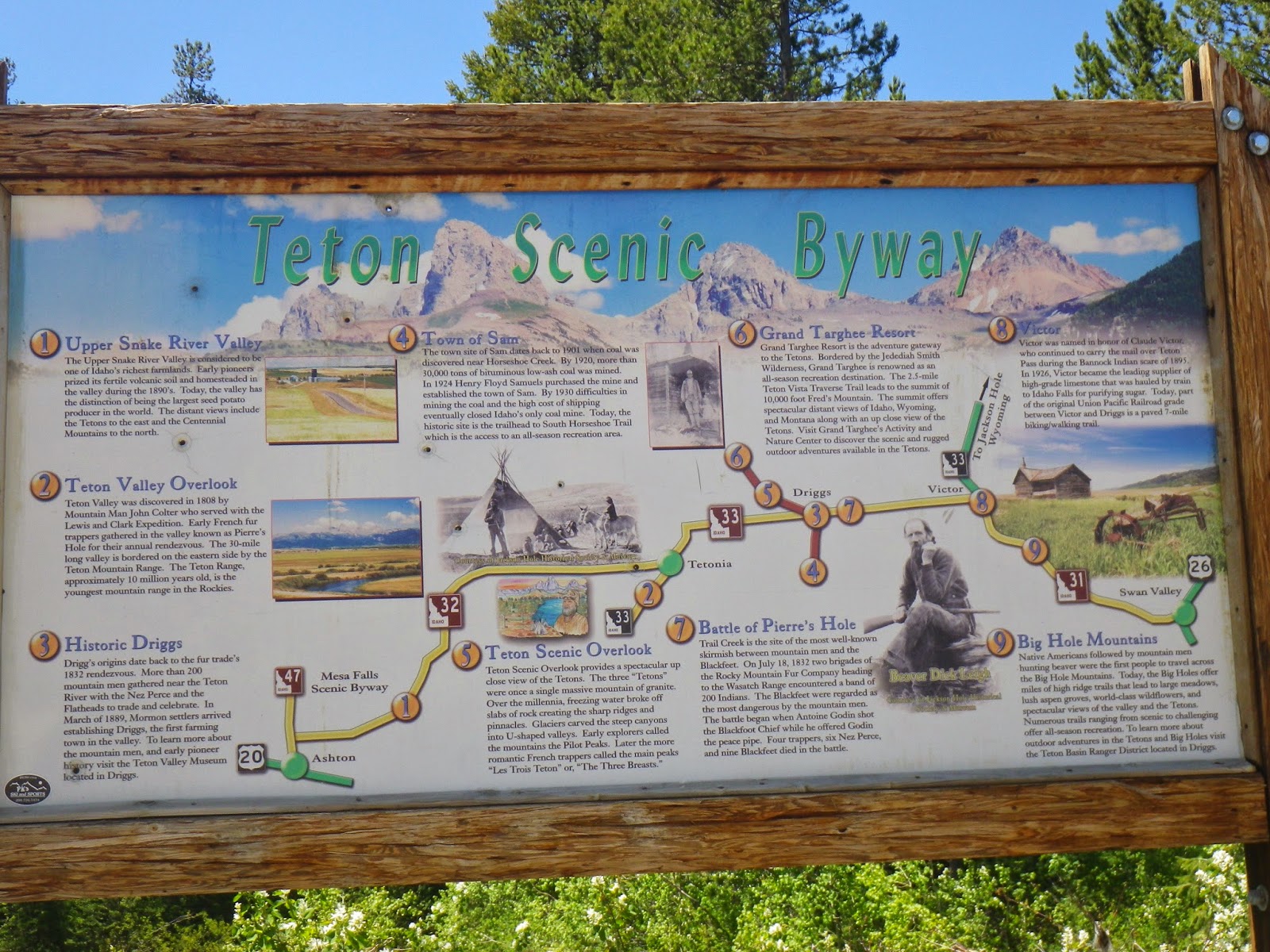 Noticing a bike shop in Victor we parked and walked in but the bikes were a bit over our price range. Having wrecked two sets of bikes from salt water exposure, we were looking for bikes to ride around here and then leave during the winter travels.
Inside the store, the first bike we looked at had a price of over six thousand dollars and I realized there must be some seriously rich people here, Hmm maybe we could sell some jewelry? After explaining our price range the salesman kindly kept from laughing and suggested that perhaps we would have better luck with the local swap meet for used bikes. 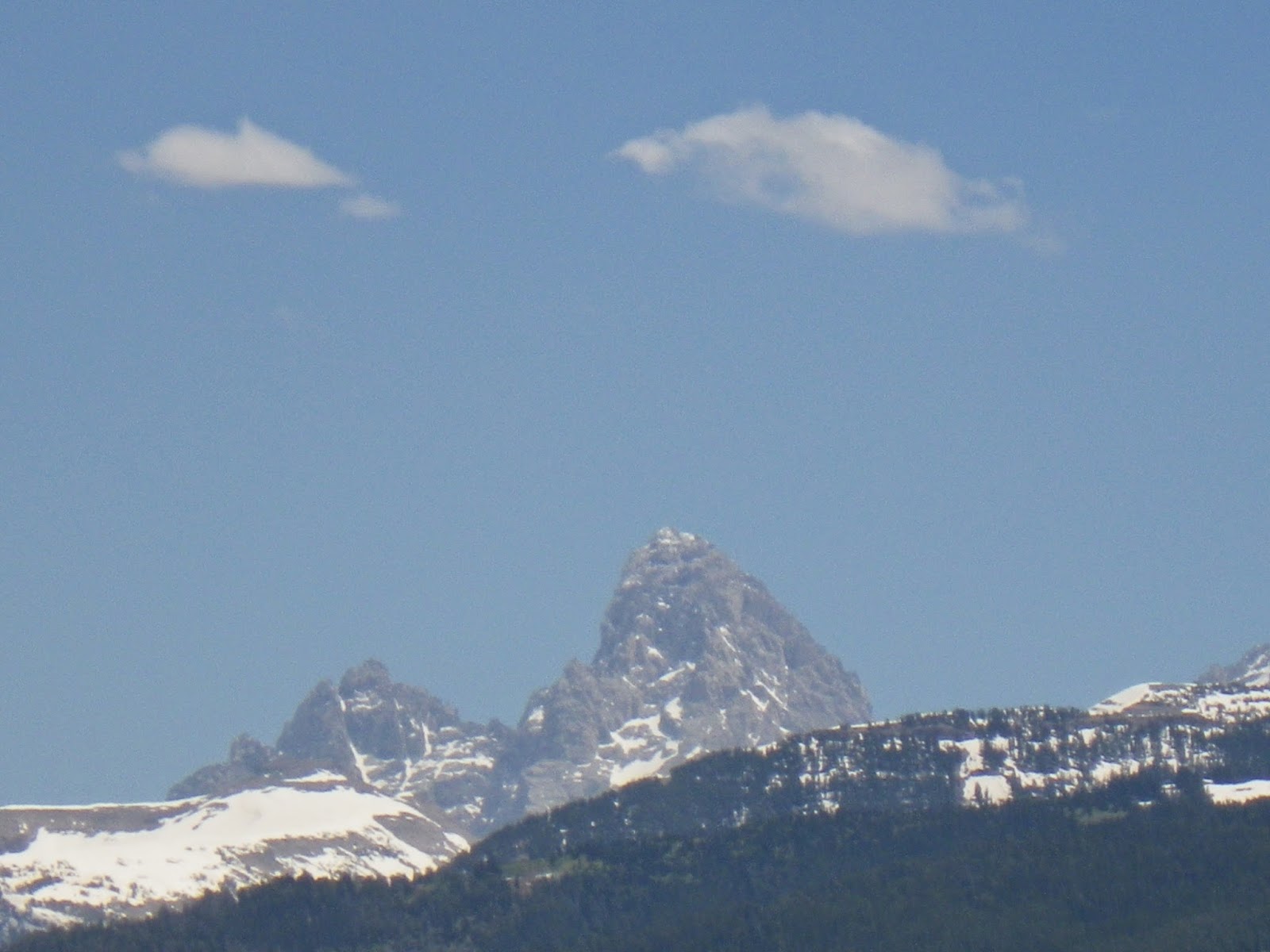 Driving further we reached Driggs and cruised the Main Street where Renita had googled rock shops and found the Teton Jade and Gem Shop. Amazingly, unlike most rock shops we find, the store was open, and as soon as we were in the door we realized we had found a special place.
Opals glittered in the cases, along with a variety of finished jewelry and cabochons. Rocks lined the walls and they actually had Bitch Creek Jade, found locally in the area, along with some really good Wyoming Jade, Emerald Creek Garnet rough, beautiful rhodonite, mookite, and even a nice jade slick.
Suffice it to say we spent too much on rocks and someday we must learn to say no, but how could we resist such rare and beautiful stone, (we even found some Wyoming green jade besides an eight pound boulder of high quality black jade). Now we have rocks to carry to Texas and next winters time in the rock shop, sawing slabs. 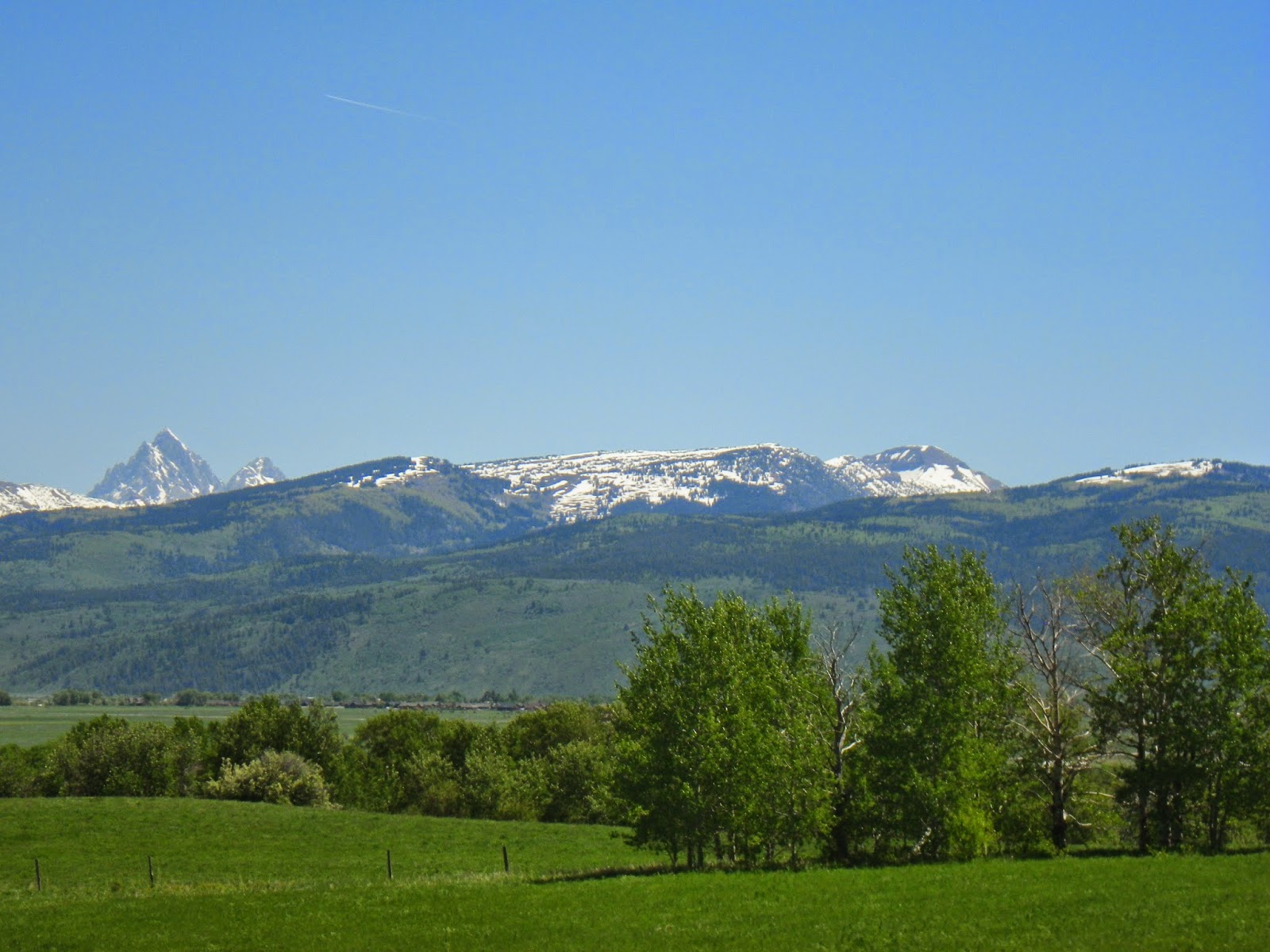 Returning home we stopped at an ice cream shop that advertised square ice cream cones. Inside a line of people wound befoe the ice cream counter and of course I had to have a square ice cream waffle cone, (didn’t taste any different but all ice cream is good).
Arriving back at our place we decided that we didn’t want to cook so we went out to dinner in Thayne, Wyoming. Here the choice is limited but surprisingly there is an excellent steak house in this small town of four hundred people, (Dads Steakhouse and Bar). All the menu items are excellent but the prime rib is tops and so of course we had to have the prime rib.


It had been a nice anniversary with new memories that we won’t forget, and that’s what is so special about retirement, being able to have the time for exploration. A nice anniversary day trip, more rock, and especially time together, every day is a blessing but some days more so. Clear skies
Posted by Doing It On the Road(Part II) at 4:25 AM 2 comments: