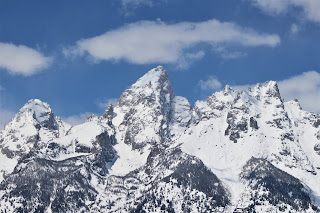 The snow stopped in Dubois and the sky cleared. Still we waited a bit for the sun to melt the ice on the road before we headed up Togetee Pass. The pass is over 9500 above sea level and so we knew we would run into ice covered roads. It had been a while since I had driven them, but we took it slow and we only had to use four-wheel drive for a few spots.
Watching, as we traveled over the pass, we did not see a single animal track. It wasn’t really any surprise as the snow was deep and cornices stood prominent on many ridges. There wasn’t anything for the animals to eat. They all had to be down in the valleys. 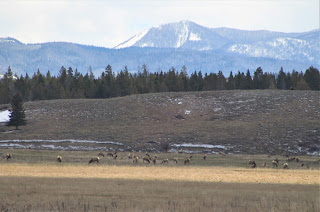 We saw our first elk just before we entered Grand Teton National Park. They were in a small herd of about twenty animals and we didn’t stop as we were really hoping to see grizzly bears. Arriving in the park we turned north at Moran Junction and continued past some of our favorite places.
The Oxbow on the Snake River, had a few American White Pelicans, but no elk were in the nearby meadows. Further up we passed Willow flats, another great bear spot, but the elk hadn’t yet reached there. The cow elk use the flats to have their calves and so when they are there, so are the grizzlies, as the calves are one of their main protein sources. While there were no elk at Pilgrim Creek there were a few cars parked and waiting for the appearance of bear 399 and her cubs. 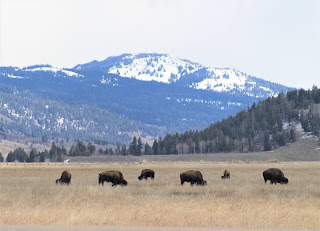 No one had seen her yet today and after waiting a little bit we decided to head to our summer base camp, (home), at Star Valley Rv Resort. We saw a few buffalo grazing across from the Cunningham Homestead, but we finally spotted large herds of elk at Antelope Flats.

We have been coming to the park for over thirty years and in all that time had never seen the elk migration. In the fall and spring many of the elk come out of Yellowstone and head south to their winter range, which is the refuge just outside of Jackson, (They used to winter in Jackson before the town was built). 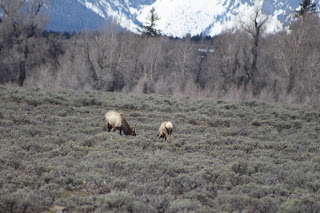 This year we stopped as we saw elk everywhere, and some of the elk herds were moving across Antelope Flats, One was a bull elk that had not lost his antlers. 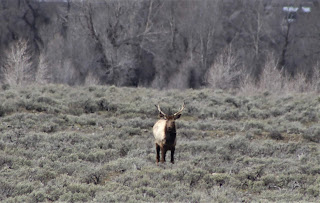 During the migration the elk move about twelve miles a day, meaning it takes them about ten days to reach Yellowstone, ( they don’t travel in a straight line but follow the route taught to them by their mothers. 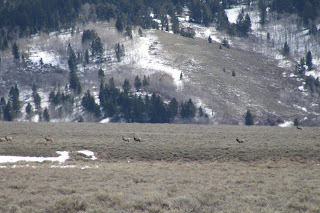 Many other tourists were at the same spot we were, but they were taking pictures of the Teton’s, not realizing that they were missing part of the third largest migration of ungulates in the world, (the largest is the African migration on the Serengeti, and the second largest is the caribou migration in Alaska).
We were tired and finally left the National Park to drive the fifty miles to Star Valley RV Park. Arriving we were happy to see that our Bighorn Fifth Wheel had survived the historic snow fall. We set up, hooked up the water, and sewer lines, slid the slides and turned on the furnace. Home at last!  Clear skies