Another Hectic Week with Trips to Idaho Falls, The Tetons, and Casper, Wyoming 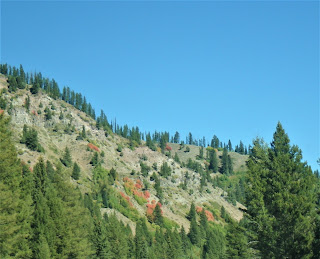 It has been another hectic week. First, we had to travel to Idaho Falls to fill our prescriptions. Next, we made a trip to Grand Teton National Park in search of bears. Last we made a somber trip to Casper, Wyoming to attend the funeral of my Uncle Jim.

Traveling as much as we do, getting our medications is a lot easier in a nationally available drug store, Similarly, we do our banking at a large nation-wide bank system. It is easier to get cash when needed and to deposit checks when we sell something, (we also use mobile banking). 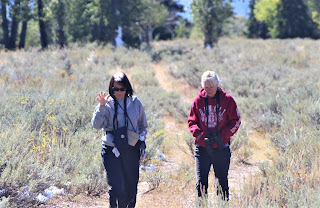 Last year we traveled to Grand Teton National Park with our friends Fred and Becky. Like that trip we hoped to see bears. The fall is a good time because the bears concentrate on eating berries and so if you can find a berry patch there is often a feeding black or grizzly bear.

This year has presented an unusual difficulty as there are so many full berry patches that the bears are not having any problem finding lots of berries to put on their winter fat. Still we hoped to get lucky and see bear 399 and her four cubs, and any other incidental bear we could find. 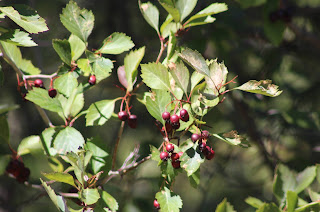 We took both of our cars, so we could keep a safe social distance. Having avoided the Covid virus, so far, it would be a shame to falter as the much hoped for vaccine gets near. As we traveled up the Snake River Canyon, we could see that the fall colors had started to change. No aspen change yet but the red maples and yellow are providing some color.

Before arriving at the park, we stopped in Jackson so Renita could turn in her Cutt Slam award application. She found out that the regional office was no longer taking applications and that we could either mail the completed application and pictures or we could send them in online, (we chose online and it worked really well).

Our first stop at the park was at the Oxbow area. While there were cones out, and a waiting ranger, the bears had moved and so we did not get to see grizzly 399. We had seen a video taken a few days before where the fur cubs had wrestled and taken turns chewing on the cones. Spotting bears requires a lot of luck. 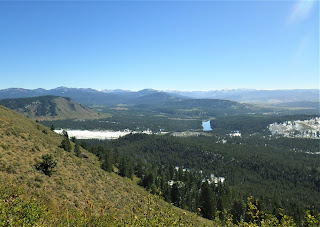 Next, we drove to the top of Signal Mountain, not a drive for the acrophobic. From the top one could see a large area of the park, including a bend of the Snake River and the terraces and potholes. A wildlife guide was there with two clients and she did have her spotting scope up, but they had not seen any bears.

There were a large number of cars in the park and we were unable to find a spot to park at String and Jenny Lake. We ended up driving to the Moose Wilson road and ate our lunch in a parking lot. A pair of elf cows grazed in the meadow below and we took a few images before hiking down the trail. 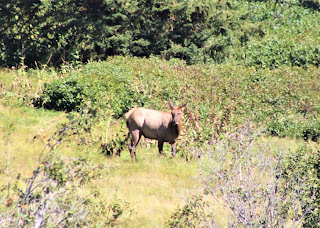 A couple passed us on the trail arguing so loudly that any bears in the area had surely left. We did see bear scat, not a lot, and we all looked for tracks as we walked the trail. The bushes and trees were loaded with berries, the most we have ever seen.

Returning to our cars we drove the Moose Wilson road but other than lots of other hopeful bear watchers we never saw ay more wildlife. A day in the Tetons is always a good day, with or without bears. 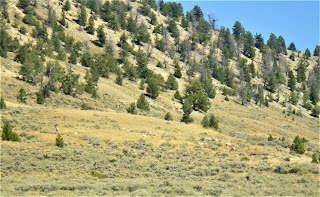 Finally, we made a somber drive to Casper to attend the funeral of my Uncle Jim Herold. It was a trip to celebrate his life, and his life was a life well lived. One story about his integrity. He worked for the Federal government as a timber cruiser and his job was to estimate the amount of board feet in a parcel of timber up for bid.

He was offered a bribe by a lumber company, a beautiful house, if he underestimated the board feet in the timber parcel. Turning in the correct amount he was punished by being transferred to Casper, Wyoming. It was a decision that he never regretted, and he grew to love the beauty of Wyoming’s mountains, deserts, and plains.

Funerals are to celebrate a life and it presents an opportunity to reconnect with relatives and friends. It was a trip filled with good memories. Clear skies Uncle Jim!