Allyns Bight, Rv Repairmen, and a Day of Wade Fishing.

It’s been another crazy week, with two days of fishing, three days of waiting for the rv repairman, and who knows where the rest of the time went.. Our friend Dave arrived from Michigan, and after helping him to unpack we went to his storage and retrieved his boat and our kayaks.
The first day of fishing was wade fishing with our friend Terry. I had purchased new chest waders, and after donning them I waded out into waist high water where I discovered that the boots leaked like sieves. The boots also rubbed on my legs and when I took them off at home, I found I had two sores that have since kept me from going back into the water until they heal.
We did catch a lot of fish and actually ran out of bait, but none were keepers, so it was corn bread for dinner. I caught an alligator gar, my first one ever so that was pretty neat and let me tell you their teeth are really sharp! 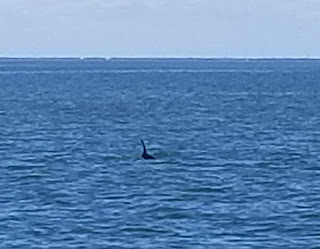 We also went out in the boat with John and we crossed the bay and fished at Allyns Bight. There were lots of fish to catch, but our usual spots didn’t have any keepers. Later in the day we did find a new spot to fish and finally after, five small sheepsheads, John caught a legal fish. It really doesn’t matter if we catch keepers as it’s always fun to go fishing with friends and just plan catching fish.
Our water heater quit working, and of course I discovered this when I went to take a shower. At least here in south Texas, the cold water really isn’t cold, more lukewarm that anything else. The next day we called the repairman who said he would try to get to us that afternoon.

He didn’t show up until the next morning and after diagnosing the problem told us he didn’t have the parts with him and that he would be back the next morning. The next day he finally did arrive with the parts and fixed the water heater, so we now have hot water, (I fix a lot of stuff myself, but I do not work on anything that has to do with propane or 110-volt electricity)!
I am anxious to get fishing in the kayaks as we did really well last year. However, we do have to buy a kayak trailer as I am getting tired of lifting the kayaks on top of the car. That will have to wait because we are going to Houston for the Gem and Mineral show and hopefully, I will show some control and not buy too many rocks or fossils. Clear skies