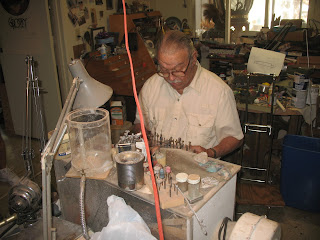 The story goes that a man went to his lawyer and said he wanted to sue a chinaman. It seems the man had paid the chinaman to teach him how to recognize jade and the first day he went to his store he was handed a piece of jade and told to sit there with it.
After an hour he put the jade down and left. The next day he returned and was handed another piece of jade. Again he left after a while. This went on for quite some time. One day, after arriving at the store, the chinaman handed him a rock that wasn't jade and so the man demanded his money back. The lawyer told him to forget the lawsuit as the chinaman had earned his fees. 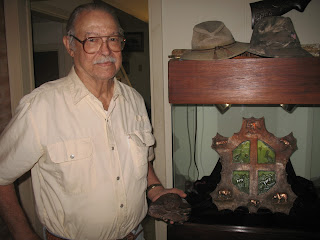 In our travels we have been so blessed to meet so many people and have met with so much kindness. Our lapidary teacher, Jerrold, had told us of a man named Warren, who carved jade and had hunted it in Wyoming for many years. We were finally able to meet him at the lapidary shop and after talking about jade hunting in Wyoming, were invited to his house to see his tools, collections, and carvings.
As soon as we entered the door we were met by his charming wife Suzie,an artist in her own right, whose medium was wood, tapestry, and sculpture. Warren proudly showed us his jade set that he called ,"Endangered Species", which was a set of four jade carvings of Texas animals that had neared the brink of extinction. They both told us stories of Jade hunting near Jeffery City and proudly held the first pieces of jade they had discovered. 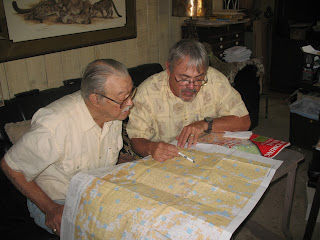 Warren showed us his other carvings and handed us pieces of Wyoming Nephrite Jade, all ones that they had found or that he had aquired,  again all from Wyoming. He told us that there really wasn't any Chinese jade, all the old jade carving were nephrite jade from Turkestan,(from a area called the White and Black Jade rivers), and that jadeite was really a substitute when the nephrite had run out.
He also told us that a lot of the highest quality jade left Wyoming for China where it was carved and worked into much that we see today. Of that the most prized was the green imperial Wyoming jade and the black Edwards jade, both rarely seen ,(although many dealers sell any black Wyoming jade as Edwards jade).
Of course we had forgotten our maps and so we asked if we could return the following week to go over places to prospect and also to learn some of his jade carving and polishing techniques. He kindly agreed and said that if nothing else he would teach us how to cut out cores and how to make homemade saws and drills. 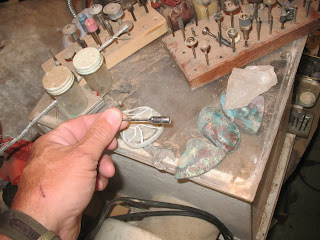 The next week we arrived at their house with maps in hand, and Warren and Suzi sat down and entertained us with stories of jade prospecting and jade hunters. Of course Suzi told us of her rattlesnake encounter and it was obvious that horny toads had made an impression as Warren had several carved from different minerals, both jade and turquoise.
He had me pull up a chair as he called up google earth and the zoomed in and showed me where they had collected every single piece of jade thay had shown us.. Here was an eighty six year old man that had a mind as sharp as the day they found the stone. The time went to quickly and he handed us boxes of small jade slicks, telling us to pick them up and feel the jade.
Suzie then said , "Warren isn't it time to release some of them?:, and he insisted that we help ourselves to the slicks, so that we could hold jade and learn its rind, feel, and color. We both picked out some of the pieces to add to our collection, Pieces that we will not work but will simply treasure as we remember the stories they had shared. Thank you Warren and Suzie! Clear skies.
Posted by Doing It On the Road(Part II) at 2:33 AM 1 comment: 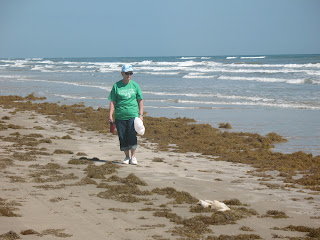 I've been silent for the past two weeks, ok I did write about the Gem and Mineral show. but its been good silent as we have had company. Pam and Roy had had enough of the Iowa winter and headed south for their yearly visit and while it was crowded in the fifth wheel, the two weeks actually worked out fine.
The weeks were filled with so much and most importantly filled with sister time. I don't think the girls passed up visiting a single store in the Coastal Bend, ok maybe a few, :), luckily Roy and I were able to skip the prolonged shopping and spend some quality time fishing. 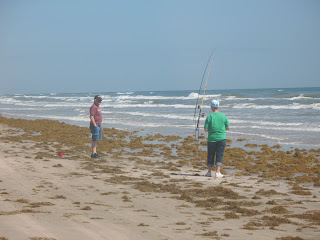 We did of course go for the picnic on the PINS, beach,(Padre Island National Seashore). A day there is always well spent with shelling and fishing and walking. The fishing was poor as the seaweed weighed down our lines and made it impossible to hold in place, but it was still fishing. The water had warmed enough so that you didn't need waders and of course the resident Great Blue Heron had to visit us begging for a fish lunch.
Of course we talked rock and lapidary. Roy is also new to the obsession, and he showed us his work, all done with an inland lap and a tumbler for polishing. He really does amazing work, I envy his free form heart shapes and he was kind enough to share his techniques as we did ours. We both came away with new ideas for cabochons. 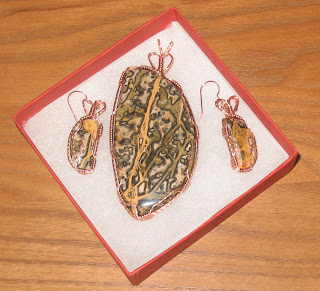 Another day Roy and I went to the North Jetty at Port Aransas. We didn't make the first boat but we did take the eight o'clock ride and the jetty was still uncrowded as most people fish the free south jetty. Roy caught a 22 inch sheepshead and we ended up with another fine fresh fish dinner.
A second day of fishing was at the Packery Channel jetties. There the sheepshead were also biting and Roy caught a nice flounder. I added a 26 inch red fish to the grill and it doesn't get any better than fresh grilled fish on a half shell. 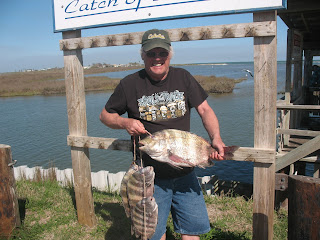 Of course we had to go see the whoopers in Lamar, stopping at Big Tree. The Ault family obliged with their ususal show and the Big Tree, well its a big live oak tree. It is so amazing to see a famly of whoopers taking possession of a pasture in a subdivision.
Our friend Dick had invited them to his house, where he showed them his work and rock and of course they were as amazed with his displays as we have been. There are so many talented artists here. Dick is in the process of sorting his collection of rough. He has been getting rid of all but the top pieces and so Roy and I left with a lot of Rio Grande Agate cobbles.
The two weeks went so quickly and as they left, with blessed tears of course,  hitch itch set in us both and we look forward to our own travels. A wedding in Conneticut, and new states to join the ones we have already visited. The road beckons and we have satyed here too long. Clear skies.
Posted by Doing It On the Road(Part II) at 2:55 AM 1 comment: 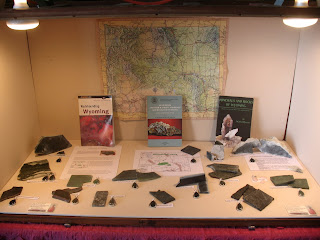 It was finally time for the big event, our clubs 49th annual gem and mineral show. Roy and Pam had come to help and shop for rock,(they also do lapidary and sell jewelry), and we were excited to set up our display of Wyoming Jade.
We had just finished the last seven Wyoming Jade cabochons and had wrapped them in sterling silver so they would complete a sixteen piece set. The display would be a slab of rough and the corresponding finished piece, along with a map of jade prospecting locations. 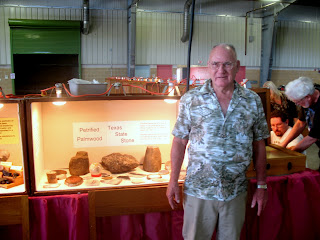 In addition, we had also been invited to fill a last minute cancellation and show and sell our work. Its a juried show so we were pleased that the clubs board had approved our entry! It was to be our first juried show.
Jerrold and Linda and Mark W, were also going to put some of their work in our store and so we were all excited.
Our friend and mentor Dick C. had also decided to sell some of his lifetime collection and so we hoped we could sell some of our work so we could buy his cabochons, his work is the finest we have seen! He was also selling his wife's, Evelyn, collection of cabochons, matching sets of earrings and pendants that had won her a National Lapidary award. 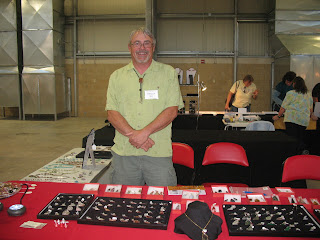 We met the other club members and loaded the trailer at seven am on Friday and after the short drive to Robstown, we helped to unload and set up the show. We had quite a few volunteers and so it went quickly.
The next morning Renita and I left early and drove to the show. The setup of our store went easy and while it was the smallest store it was composed of one of a kid handmade pieces in which we had done the lapidary and wire wrapping. Our uniqueness is that we don't buy and resell ready made pieces and their wer only two other stores that did the same. 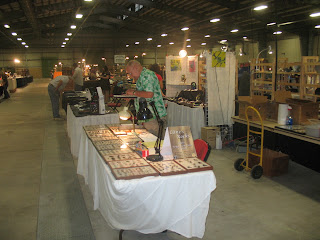 The doors opened and we got pretty busy, explaining our art wire and lapidary work, inviting people to join the club and learn to work stone, and thanking them for stopping buy our booth. We even sold some of our pieces and of course I ran over to Dicks booth and bought cabochons.
We also invested in a beautifully chatoyant five pound boulder of  South African gold tiger eye, after all isn't that what its all about, buying and collecting more rock,(note to self buy new tires with a higher load rating)?
Saturday drew to a close and we were all happy with the days events.
Sunday morning came too quickly, I had been up late wrapping custom orders of turquoise and Texas  Moss agate. I hope the people would love their rocks. Having people select your style of work and asking you to wrap their treasure makes it even more special. It seemed forever before they showed up and they were ecstatic! They even promised more orders and that's the way its been for us, the weeks after the show bring phone calls and requests.
Its all about getting our names out there and showing our lapidary work and wire art. Renita makes outstanding free form cabochons and I would put our precise wire wrapping up there with the best. To say we are having fun is an understatement and to say it is such a surprise is an equally true. Life is good! Clear skies.
Posted by Doing It On the Road(Part II) at 10:10 AM No comments: