The Whoopers have arrived in Lamar, November 2020 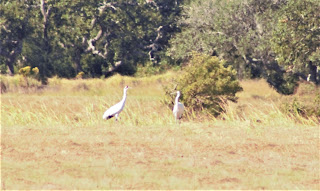 It is a short drive for us to go view the whooping cranes in Lamar, Texas. We only have to cross the Copano Bay bridge and then turn right to reach the bay front. From there we drive past the duck hunting club building and reach a small pond. 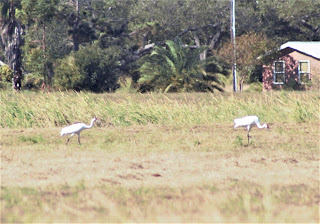 The pond is occupied by some birds but also contains a huge alligator that waits for any unsuspecting birds or birders. 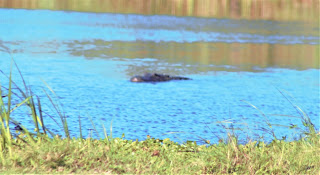 The people who live in the house have to put up with the gator and with all the birders who often stop to photograph both. They have posted no parking signs along their property line. Good luck with that, (if you want you can park around the corner and walk back to see the birds). 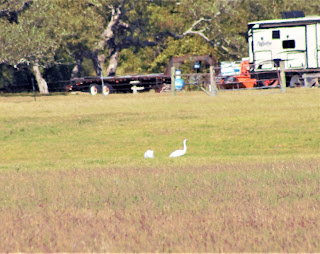 A little further and you reach a huge open field where you can see more another pair of whooping cranes. Each adult pair occupies about a square mile of territory and does not suffer with letting other pairs into their territory. 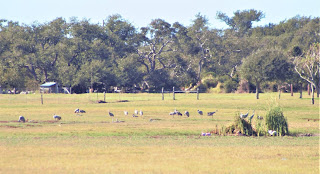 Sand hill cranes also flock to the field and try to get close to the whoopers food source but they quickly leave when the larger whooping cranes threaten them, (adult whooper cranes stand five feet tall). There is also a small pond in the field which contains snowy egrets, black belied whistling ducks and rosette spoonbills. 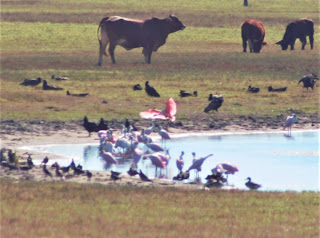 You may also see night crowned herons, but we did not on this day, and of course the ever-present turkey vultures. All in all, it is a great place to see the whooping cranes. We do plan on taking a ride on the bird boat, the skimmer, after we have gotten our covid shots. Another option is to drive out to the Aransas Wildlife Refuge, which was created to protect the whooping cranes. We usually do that each year. 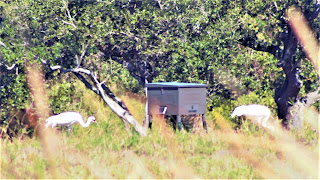 Our count for the day was eight whooping cranes, numerous sandhills, rosettes, and black belied whistling ducks, We also saw the one alligator. Not too shabby for a two-hour time frame. Clear skies
Posted by Doing It On the Road(Part II) at 3:59 AM 1 comment: 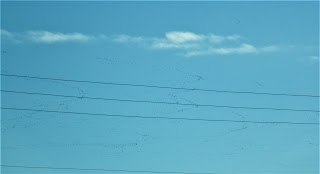 After a tough day of fishing, Renita and I decided to head out for a morning of birding at the Leorna Turnbill Birding Center in Port Aransas. Our friends Jane and Dave had told us of seeing thousands of ducks and a flock of rosette spoonbills, all close to the boardwalk. 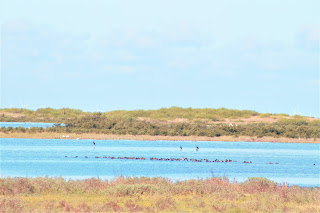 So, we grabbed our binoculars and cameras and headed over, watching for birds along the way. We did spot a cooper’s hawk, four belted kingfishers, and even a magnificent frigate bird, probably hiding from Hurricane Eta. We also spotted hundreds of flocks of duck heading south and we hoped they would land at the birding center.

While crossing the ferry pods of dolphins entertained us and we tried to get some images, but Renita had the beat luck, with our small camera. Disembarking from the ferry we were confused by the new lanes, the ferry crossings have been relocated, but we left and headed directly to the birding center. 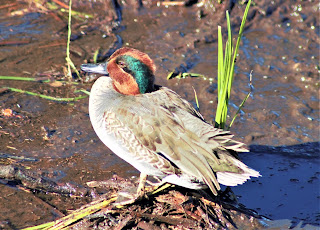 There were quite a few people on the boardwalk, including several classes of students and so we wore our masks. It was a hot and humid day, and this kept our visit short and sweet as we do not do well in humidity. We glassed for the whooping crane pair that last year had made it their territory, but they must not have arrived. We did see lots of ducks but not the thousands that Dave and Jane had spotted. 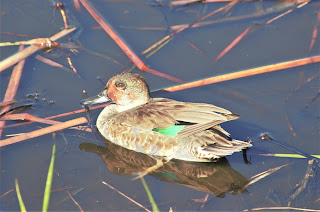 Even thought the fall birds are drab, compared to their breeding plumage they still had color and we enjoyed watching them as they fed and napped on the still water. A green winged teal even woke up, at least opened its eyes so we could photograph in and a blue winged teal paddled by. 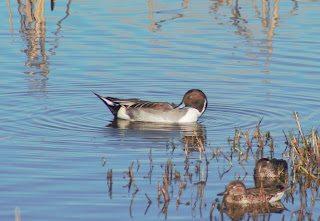 Northern pintails were evading the hunters and American coot went about their business. A northern shoveler, along with ruddy ducks posed below us. 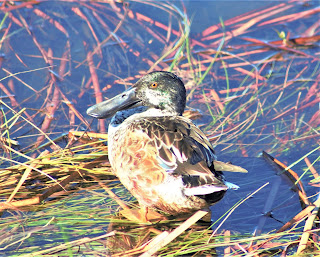 American white ibis waded and fed, and the ever-present common gallinules fed below us. 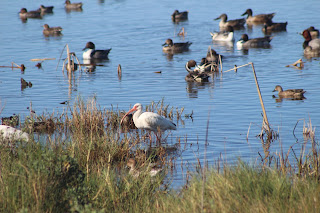 We did see an unusual colored bird which looked like an immature purple gallinule or perhaps a purple swamp hen, which was introduced to Florida, but we are think it was a young purple gallinule. 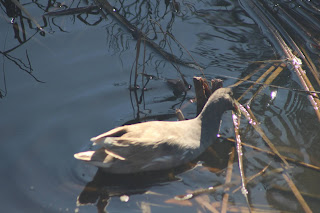 We left the birding center tired and hot but we enjoyed ourselves and will return there again. A couple of cold fronts are forecast to pass thorough the coastal bend and cool things off a bit. Clear skies. 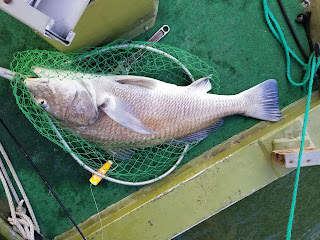 I baited my hook with a small piece of fresh shrimp, hoping that I could catch a sheepshead. I felt a sharp tick as my bait was being picked up and setting set the hook my pole doubled over. The fish made a run from under the bridge and swam through an opening in the structure forcing me to try and get the fish to swim back through the gap. The edges of the pier and the iron work were covered with barnacles and I knew it would not take much to slice my thirty-pound test braided line.

Holding the tip of the pole underwater I kept the line away from the shellfish encrusted structure and after a long fight lead the fish through the iron work and into the waiting net. The problem was that the fish was too long for the net! Dave expertly slid the net under the fish’s head and then rolled the fish in, most of it anyway. Together we were able to lift the oversized black drum into the boat. Taking a quick picture, I slid the fish back into the water and watched it swim away, (the black drum over thirty inches must be released as they are the spawners).

That morning we had decided to first go to a spot near Cove harbor, but after two hours all we had caught were small reds and hard head catfish. Dave suggested we should try where we had caught fish two days earlier, so we loaded the boat up and drove ten miles to another boat ramp. 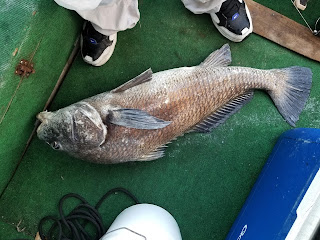 It did not take long to reach our spot and hooking up to the structure. We both cast out. I dropped my bait to the bottom and after missing the first bite I set the hook on the fish above. Dave meanwhile cast out again and set his hook into a nice nineteen-inch black drum. He quickly caught another keeper while I was busy with undersize fish.

The fishing slowed and we went to our next spot. There the fishing started out slow, but I finally set the hook on another keeper black. One more fish and we would have enough for dinner and Dave landed his third keeper of the day.

Now he cast out again and holding his pole felt the fish take his bait and then make a powerful run. It was another big black drum but after a strong fight the fish broke off on some oysters. He put on a new leader and he quickly set the hook on another monster. That one also found the sharp edge of the structure and again cut the line. Another cast and another big fish was lost.

Things settled down and we ate lunch. My friend took me to another spot where we started catching small fish. I baited up with a small piece of live shrimp and lifting it off the bottom a huge fish took the bait and swam with the tide! I was finally able to stop the fish but getting my line back was another matter.

Over and over I would gain some line only to have the fish make another run taking the line I had gained. It seem like forever but thirty minutes later the fish grew tired and we were able to lift the fish into the boat. This black drum was 37 inches! 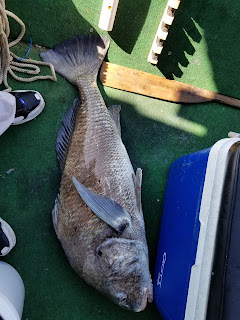 We were about ready to leave when it was Dave’s turn. He set the hook on another huge fish and after another half hour I was able to net his fish, a forty-two-inch bull drum. It was hot and we were tired and sore. so, we headed back in. Howeever our day was not over as the shifter broke, but between the two of us we were able to get the boat into gear. Thank goodness we did not have to paddle in. I doubt we could have managed it.

(Using the length, we estimated the three released large fish as weighing twenty-three, twenty-six, and near forty pounds) 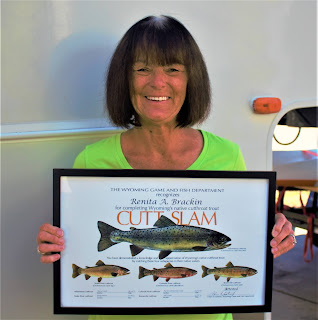 We wrote in early September about Renita catching the Colorado Cut Throat. She was so excited about meeting all of the requirements for the Wyoming Cut Slam Award and she finally got the award in the mail yesterday, here in Texas. She has been beaming ever since! 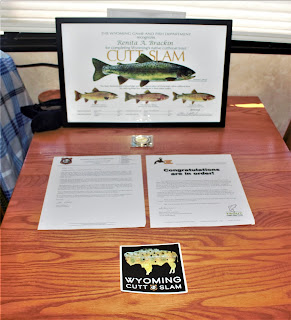 She worked hard for it a she took up fly fishing about five years ago and started as most do by learning to roll cast. Its a simple technique that works really well in small streams and we have many small streams here in Western Wyoming.( Pictured below is her first ever fly fishing cutthroat trout, any trout for that matter) 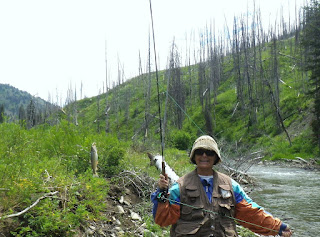 Later her friend Val, her main teacher, took her out to a grass lawn in Star Valley and showed her how to lay out some line. That's a technique for making longer casts, usually in large rivers or when fishing our mountain lakes. 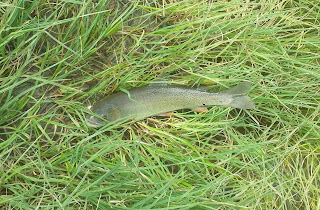 Besides the casting she had to learn to mend her line, stripping the line as necessary, and most importantly concentrating on her fly during its drift. Often you don't see the tiny fly and so setting the hook requires you to set on any rising fish.

Finally you have to play the fish in remembering that she is using a five x tippet. That a piece of monofilament line that's not very strong and is easily broken by a large fish! Of course there are trees in the way and snags always waiting to cause problems, (along with keeping an eye out for bears, wolves, and moose). 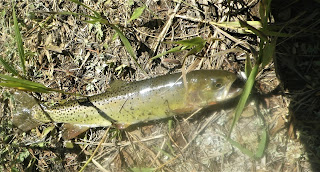 She has mastered all the techniques including handling the fish and safely releasing the fish using a medical forceps. Now she has joined the ranks of successful fly fisherwomen! Well done Renita!