Pam and Roy are here and this year they rented a cottage in Lamar. Their place is near fourth street, alongside the pond and do they have birds, (also two alligators one of which is huge and in th backyard of a house). 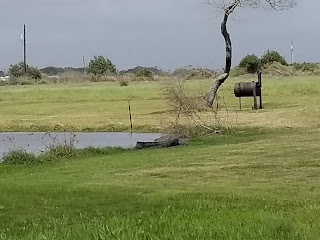 On a lucky day you can watch ten different whoopers feeding in the field across the way.

The attraction is a timed automatic feeder, and a dominant mated pair take control of the feeder! They keep away the eight immature whoopers, like our teenagers, a flock of smaller sandhill cranes, and even a herd of deer. All of these are well aware of the long sharp beak of the whooper’s They use the beak to rip apart blue crabs and there is a recorded case of one male whooping crane killing a feral pig that neared its chick. 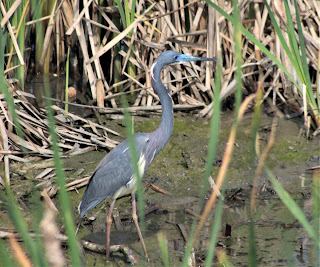 Besides the whoopers dusk is filled with squawks as flights of tricolored herons, white ibis, little egret, and others all come in and land. As they fight each other for a preferred reed or tree branch they all raise a huge roar of squawks. Its lot of fun to hear such a raucous party.

Yesterday we decided to return to Port Aransas as Pam and Roy have not been there this year. As always, we started the birding by stopping at Leorna Turnbill Birding Center, and then driving to Paradise Pond, and Charlies Pasture.
There is a pair of whooping cranes that have taken possession of the area, (the whoopers are expanding their range), but they were not there and so we concentrated on the ducks, cranes, avocets, and other waders. 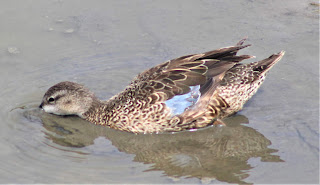 The usual blue wing and green winged teals, along with the northern shovelers dominated the water. The sun was just right, and we were able to see the blue,(the blus wing patch pictured is actually a female mottled duck), and green patches. A pair of black bellied whistling ducks paddled serenely along the water seemingly oblivious to all the other birds. 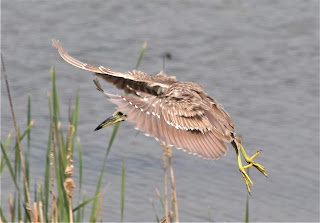 An immature night crowned heron flew near us and we got a great landing shot! And a tricolor posed a few reeds away. 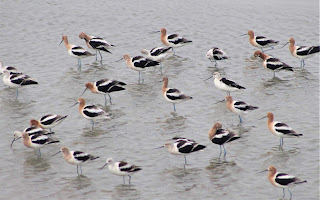 We next drove to paradise pong and it was pretty deserted but there were some Great Crested Fly Catchers. Now, if we could only find our life bird list we could see if it’s a new bird for us. 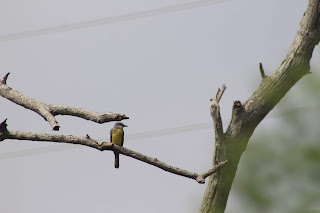 There are also reports of a clapper rail, which would be another new bird on our list, but we didn’t see it.

It was a nice day with family and a nice day for a picnic. We sat near by the ferry landings and enjoyed our lunch even though grackles and laughing gulls threatened to steal our lunch. Clear skies and stay well.

A Great Day of Fishing and Catching near Rockport, Texas 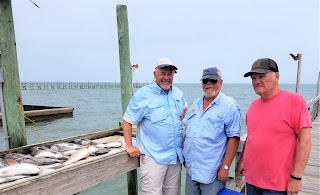 Happy hour is a daily occurrence and unlike the Happy Hours at bars very few people drink. It’s a time when we all gather together to share what we have done that day and a time to make plans for trips, fishing, or other fun events. Our friend Dave asked Roy and I if we would like to go fishing in his boat and of course we jumped at the chance.
We woke up the next morning to a heavy, dense fog and  a fog advisory had been issued but we were able to make the short drive to the boat launch and the fog seemed to clear enough so that we could motor to Dave’s fishing hole.
After things quieted down a little, we started to see some swirls from larger fish and casting dead shrimp to the sand holes, (if you look carefully you can see the slight color change where the sand holes are,) holes it didn’t take long before I missed a bite.

Casting back out it wasn’t long before my bobber started to move and then sudden disappeared. Setting the hook, I knew I had a nice fish and Dave netted the nineteen-inch black drum.

Dave’s turn was next as he cast to my spot and his bobber disappeared. It was my turn to handle the net and we soon added another nice black drum to the cooler. After several more fish Roy set the hook on another black. All three were about the same size and then things slowed down.
After lunch the bite the returned and we added more black drum. Later in the afternoon redfish started to hit and I caught a twenty-two-inch keeper which Dave surpassed with a twenty-four-inch fish. It had been a steady day and we had not moved from the first spot we had tried. 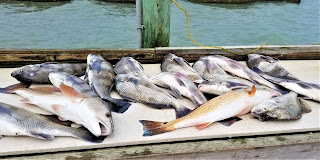 We had enough fish in the cooler for our upcoming fish fry! All that was left was to clean the fish and the boat! Its always fun to go fishing with Dave and for some reason we sure seem to catch lots of fish. Thank you, Dave, for the great day!
Clear skies 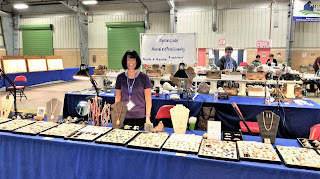 It was time for our first big show of the year and so we traveled to Robstown, Texas for the Gulf Coast Gem and Mineral Societies’ 2020 gathering. The show was scheduled for Saturday and Sunday and so Friday was the setup day.
Arriving early, I helped to setup the GCGMS display cases while Renita carted our display to our tables. We purchased a pull wagon several years ago and she quickly and efficiently got our tables ready. Meanwhile I and others helped to sort the twenty cases. My main task was to set up the lights and electrical cables for each case. 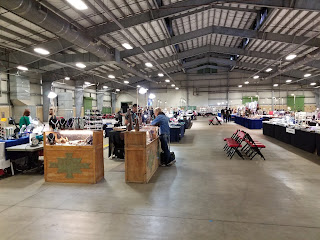 Everything went quickly and by noon we were back in Rockport. There we washed and cleaned more of our jewelry, replaced some of the price tags, and packed the car. We don’t set out our pieces until the morning of the show, even though security is provided by the club.
Saturday arrived and we left early. It was an hour drive to Robstown and it only took an hour for us to set out jewelry out. The past year has been good to us and we have added lots of new stones, opals, rings and bracelets. We hoped for a large turnout as our success depends on the number of people that walk through the door. Not everyone buys our work, but the numbers tell us how successful we will be.
The gates opened, and there was a lineup of people, but it didn’t seem as busy as last year when we had a record turnout, and for us record sales. It was a slow day, but we had returning customers who stopped and visited us, which is always fun.
That night Renita totaled our day’s receipts and she came up with an extremely disappointing result. We had made a little money, after deducting the entry costs and travel expenses but the total was less than half of last year’s first day. 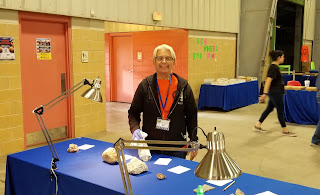 The second day arrived, and as usual Sunday morning was really slow. Still we made sales and one bright spot was having more returning customers. Another bright side was that our new bracelets made up twenty percent of our sales.Still it was slow and I was able to wander over to the silent auction table, run by Rita and Josie, where I did buy a rock.
At the end of the day, we talked with other vendors who told us that their sales had also tanked. At least we weren’t the only ones. As we left, we talked with the GCGMS president who told us the numbers of ticket sales had dropped from 2200 last year to only 1200. No wonder.
The coronavirus had caused many to stay away and who can blame them. Luckily, we don’t depend on our sales for our daily lives, unlike many of the others. Let’s hope that things will get better for our summer shows in Alpine and Cody, Wyoming.
Clear skies, and don’t forget to wash your hands!

Fishing, Making Bracelets, a Quick Trip to Houston, and Getting Ready for the Robstown Show 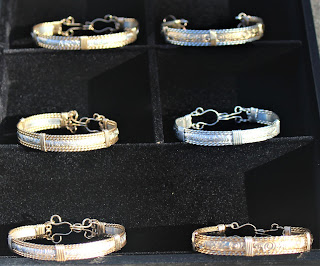 The last week has been extremely busy but as the title suggests I still made time to go fishing. Terry asked me if I wanted to wade fish an area called Tin Can and even though I knew my waders leaked I decided to go. 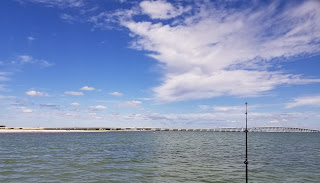 The fish didn’t bite, and the water was cold but at least I found the leak. Water quickly filled my right boot and when I took the boots off, I noticed a large hole the size of drill bit. No wonder it flooded into my neoprene boot waders! Did I say the water was really cold?
Monday Renita and I made a quick trip to Sugar Land as my hearing aids had develop a loud static noise. The hearing aid specialist asked me if I had worn them in the shower. I told her no, at least not for quite a while and then only for a few seconds, but the fog here has been like pea soup and as soon as you go out in it you are coated with heavy dew.
Its so bad that you can not wear glasses! Anyway, both were sent in and replaced under warranty. The problem is it took a week and so for a week I couldn’t here much of anything. I was really glad to be able to hear Renita again!

Finally, our first big show of the year is this weekend and while Renita has been making kumihimo necklaces, she and I have been making a new style bracelet. They take quite a bit of gold and silver wire and expensive pattern wire. All three types of bracelets have been getting compliments and so here’s hoping that it results in sales.

The show is the annual Gulf Coast Gem and Mineral Show. Its this Saturday and Sunday at the Robstown, Texas, County Fairgrounds building.

It really depends on the size of the turnout. There are no cases of the Core 19 Virus in Texas yet so here’s to optimism!
Clear skies