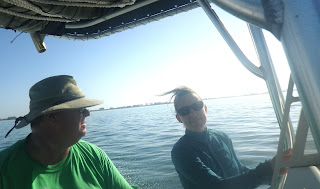 It wasn’t a very long run to the gps coordinates. Bait fish showed up on the Garmin and Mike quickly dropped the marker buoy. Next was to test the bite before anchoring and then after determining the drift direction setting the anchor. It was impressive to watch Mike run his boat and his systems, a pure pleasure to see such expertise.

Jen and I baited up with live shrimp and Mike hooked up a live pin fish. He was going after grouper and we were fishing for anything, perhaps even a hog fish. Now I have never caught a hog fish, even seen one for that matter, but I knew the hog fish bite was on.
Almost as quickly as we dropped down Mike had a fifteen-inch red grouper. The size limit is a twenty inch minimum so he released the fish and it swam safely to its coral home. Jen was next to catch a smaller fish and not sure what it was she released it. After catching several more, we looked the fish up and discovered it was a white grunt. They are usually not kept but do have an excellent rating so we started to keep the larger ones. 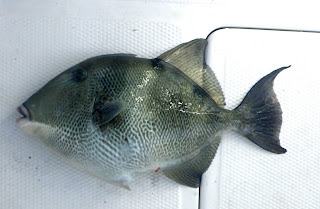 Jens turn for a larger fish was next and she landed a beautiful eighteen inch trigger fish. They are good eating but the season was closed to January first. I soon had my own trigger fish and and even though we released the triggers it  was a new species for me. 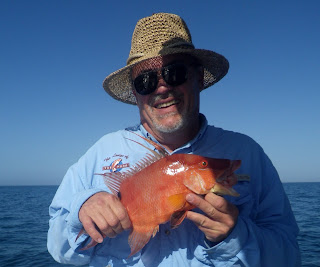 My turn came again and I fought in a large fish. As it neared the surface we could see the bright orange color and the mohawk styled dorsal fin, a hogfish! It was a really nice one and measured eighteen inches. 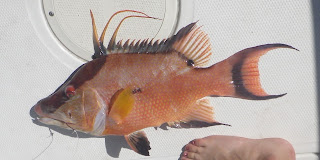 We caught a few more large grunt and before Jen fought in her own beautiful twenty inch hog fish. I tried something a little differ and had a huge fish grab my shrimp. I fought it for a little while when suddenly Jens pole doubled over, we had a double! 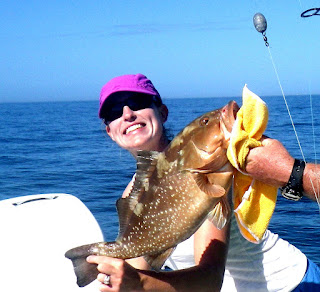 However my sixty pound leader parted while Jen kept her fish on and finally landed a twenty one inch red grouper. The ice chest was filling with good eating fish and Mike was feeling a little frustrated as he kept catching undersize grouper and white grunt. 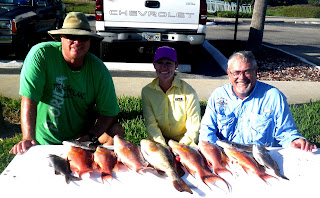 I could go on but before we left I had caught my limit of hog fish! Later, I cleaned the fish and Jen sautéed the fish in olive oil, lemon juice, and capers. I must say that fresh hog fish are one of the best eating ocean fish I have ever tasted! Thank you Mike, for the great day on the water! Clear skies
Posted by Doing It On the Road(Part II) at 2:30 PM 1 comment: 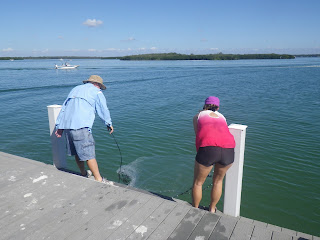 We celebrated Chistmas Eve at Jen and Eric’s house. Friends and family gathered and we opened presents because Jen had to work Christmas Day. As to the activities order, well of course we went fishing, followed by an excellent Christmas feast, and then the openings of the gifts. 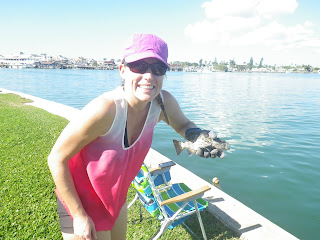 It was a pretty good bite but we released everything as red tide has moved in and many dead mullet floated by. The pelicans and great blue herons preferred our live fish and we almost had to beat them off. 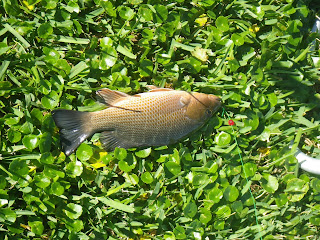 Jen caught a nice mangrove snapper and several grouper, as well as the usual black tail and grunts. I had a nice lady fish on for a while, (it’s very similar to a small tarpon), but it threw the hook and released itself.
So, we had Eric’s huskova with meat balls, and my barbecued ribs. The change to my ribs recipe was  that I used some sugar free barbecue sauce. It was a type of a Carolina sauce with several types of vinegar. I prefer it to the heavily sugared sauces commonly found in the grocery stores. 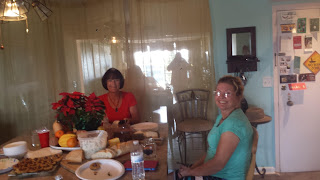 Jen gave us the best gift of all, a jump drive filled with all the wedding images. Look out if you come over and visit us as I am sure Renita will want to share them all! They also gave us a nice portable cooler. It’s perfect for our fishing expeditions both here and when we go fly fishing.

Christmas day we celebrated Mass at the local church before we went to visit friends in Largo. Ed and Pat have bought a house in the same park where our friends Bill and Sharon and Ed had made a barbecued prime rib. Ed is an excellent chef and the meal was as good as it sounded!
We hope you and yours had a Merry Christmas and pray that you will have a Happy New Year! 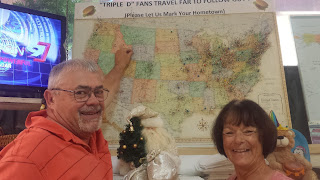 One other thing, If you are ever in St Petersburg you have to have breakfast at Munch's! Its not often you see eggs grits and mullet on the menu! We were the first customers from Thayne, Wyoming and so we got to put a pin on the map!
Posted by Doing It On the Road(Part II) at 6:14 AM 1 comment: 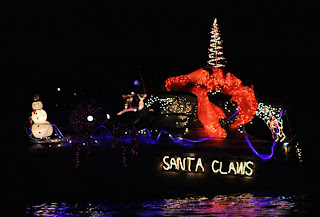 We always try to see a Christmas Boat Parade and this year was no exception. 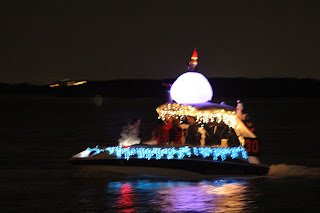 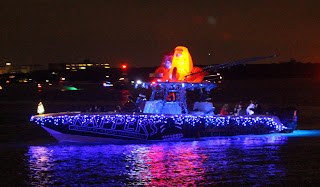 Deciding to only see one we opted for the Madeira Beach boat parade. It started in John’s Pass and 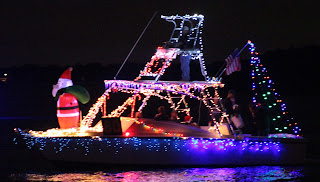 Eric invited us for dinner, (Jen was working). It also gave us another chance to visit with his Mom who was visiting from Pennsylvania. 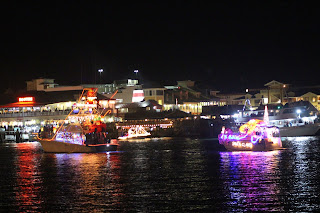 After a hearty dish of cabbage, onion, and pasta, (a traditional meal from Eric’s family) we headed down to the sea wall to view the boats.

Brightly lit boats milled in circles as they waited for the start signal. A police boat flashed its light as  it tried to herd them into some semblance of order. 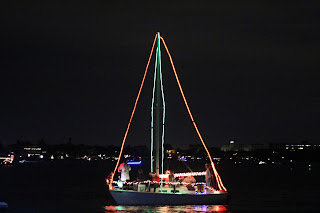 In spite of the confusion the boats avoided collisions and the parade was off! 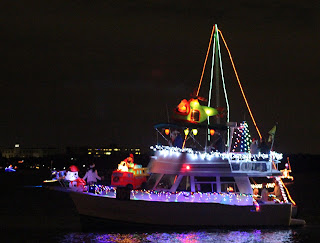 Boats passed by decorated with crabs and fish. One showed Santa fighting a fish while a shark pursued them both. 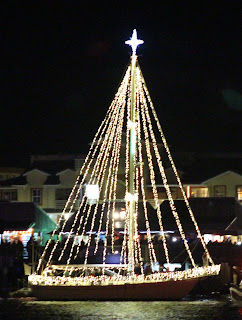 I tried something different and used the sport setting on my camera instead of the night time view. 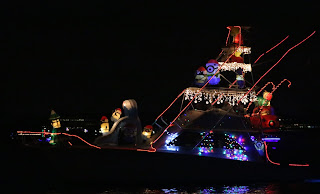 It seemed to work better as the boats were moving and there was enough light when I zoomed in. 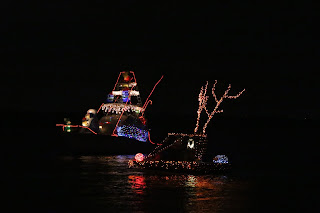 I really didn’t have a favorite as there were so many beautiful displays. 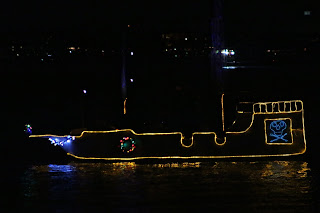 I guess the best thing I could do is just share them with you. Oh and a hearty well done to all the participants! 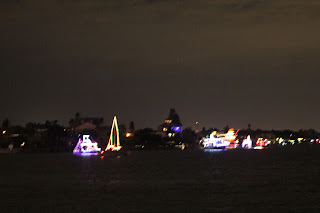 Email ThisBlogThis!Share to TwitterShare to FacebookShare to Pinterest
Labels: florida 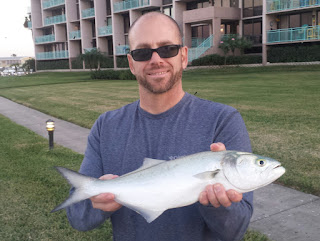 Just as I was getting ready to update the blog, our computer crashed 3*!^ARGH#! After four hours of looking up fixes on my smartphone and trying all the suggestions, still no computer. Now we have been on the road for nine years and the other computers crashed after three years each so we were due for a new one. 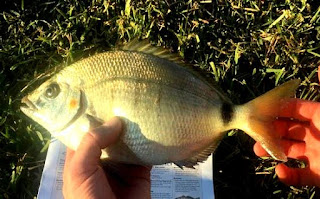 After a quick trip to the computer store we now have a new computer loaded with all the necessary software and security programs. I did have to spend additional time locating my saved programs and file and moving them but finally I am ready to write.
After the last successful fishing trip, Jen called us and invited us for another day of fishing by their condo. The greenies were plentiful and my new cast net worked great in quickly filling up the bait bucket. 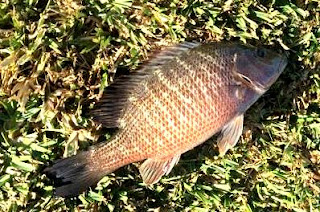 Going back to the spot where Jen had caught the groupers I cast out and had one on. The fish was again undersized so it was safely released. More time and then Eric caught a mangrove snapper. They are a small fish but are excellent table flavor and so we kept it.
Soon Eric had another and then another and Jen followed suit. Not to be outdone I fished hard and caught eight undersize gag groupers. I even tried to get as close to Eric as I could get but he easily blocked my casts and I eased off. After all they are newlyweds.
Eric cast out again and had a fish take off on a run that threatened to spool his reel. Racing along the seawall he turned the fish and I was barley to grab the line and lift the bluefish over the seawall. Now blue fish are one of my least favorite fish to eat but several people told me that I was cooking them wrong.
Following other’s suggestions, we grilled the blue fish and it was ok. However, we also sautéed the mangrove snapper fillets with lemon and capers and most fish would come off second best when you also serve fresh snapper.

The next day Renita and I were returning to the computer store and as we stopped at a red light. Looking out the window, Renita said, “Look at the parrots”.  Sure enough bright green birds were feeding next to the busy highway and she tried to take an image of them as they flew away.
Racing home we got out the bird book and it was a new bird, a rose ringed parakeet! Furthermore Renita had taken an image of a nearby tree and there near the top was a monk parakeet, another new bird for our life list! 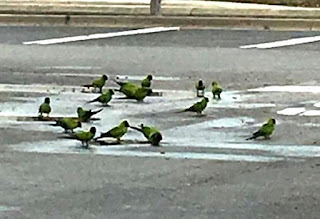 Two days later we went to Sam’s Club and in the parking lot Renita spotted a flock of black capped parakeets, also called a Nanday parakeet. Three new birds in two days! Its really funny as we have been coming here for four years, and while we have seen parrots and parakeets we haven’t been able to identify them. Now we had three great views of three new birds! Clear skies
Posted by Doing It On the Road(Part II) at 11:47 AM 1 comment: