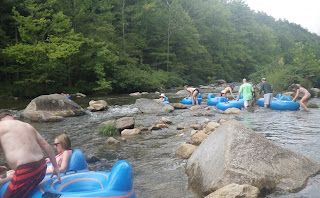 I now know what a pinball feels like, while its bouncing from bumper to bumper without any control. That’s because I was a human pinball as I rode the inner tube down Wilsons Creek while bouncing off the rocks and boulders being propelled from chute to chute and rapid to plunge pool. 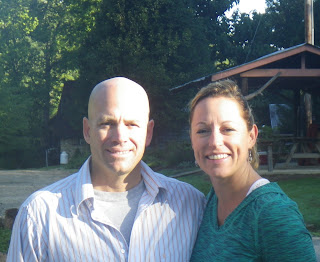 Renita and I had left Star Valley, driven to Salt Lake City, and flown to Charlotte, North Carolina for our daughter’s wedding. It was a destination wedding at a resort, located between Morgenton and Lenoir.
The soon to be married couple had chosen the location as it had all the requisites. These included waterfalls, trees, and it was an in between place where all the families and friends could meet. 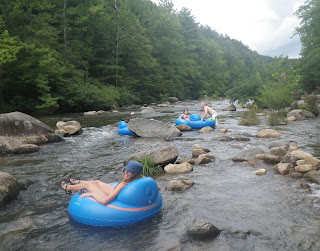 It was the day before the wedding and a group of seventeen daredevil individuals carried each one’s tube down the tree shrouded path to the water’s edge. Pushing off required all to dodge some low rocks and to learn not to allow ones behind to stick through the bottom of the tube. This was because the rocks and bottom were a way of getting hung up and it hurt when you hit a rock! 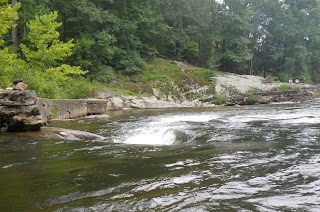 Quickly the group became separated as the myriad channels moved at different speeds. Compounding this, was the frequent stops as everyone bounced off rocks and learned, I already said this, to not let one’s bottom stick through the bottom of the tube as you got hung up. 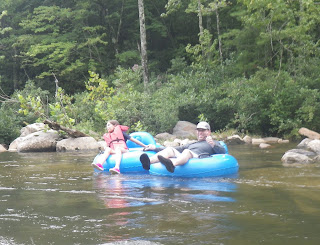 Even though many of the floaters were good swimmers, it also became quickly apparent that one could not control the tube. Trying to change direction with one’s arms and legs by paddling and kicking had almost no effect. So when the minister, Mona, became stuck in the middle of a rapids almost everyone sped by all out of control and unable to help. 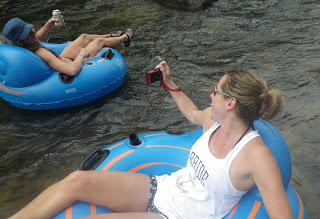 Luckily the bride, knowing that the minister was an important component of the wedding, was able to get near her and talk her through the white water and large boulders, (Jen had earlier told us she would allow nothing to stop her wedding). 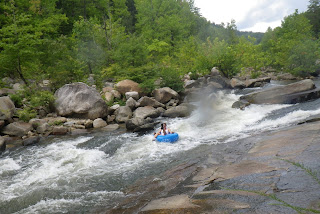 Meanwhile I heard the water roaring and realized I was near a waterfall/chute that I really didn’t want to go down. Attempting to stop, the current sped up and, like everyone else, I had no choice but to go along for the ride! 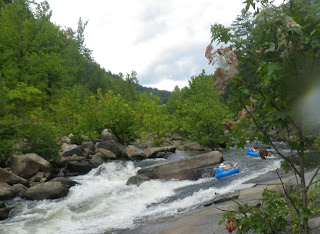 Surviving the ordeal, it was really fun after all , I was able to stop and take images of others as they screamed, shouted, and laughed, as the water took them for their own bobsled ride. 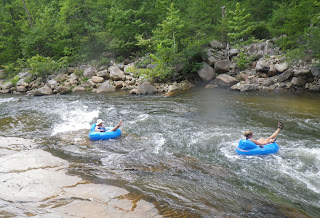 The rest of the way to the resort was more of the same. I was never in control and like the proverbial pinball bounced from rock to rock as they acted like bumpers and flippers spinning me down the stream. 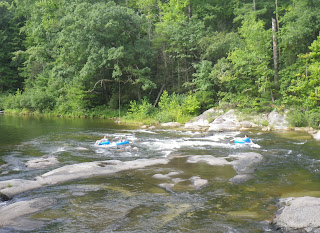 Finally, I reached the old broken dam surviving one more rapids and catching up with the rest of the group in a large slow pool. A rope hung from the far side and a large group of thrill seekers headed over to it but I decided that I was too tired and paddled to the beach. 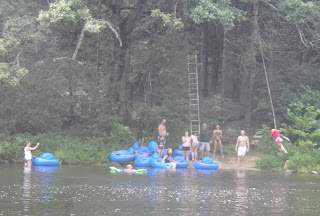 Everyone had fun and some of the group rode the rapids the day of the wedding. However, I was in the wedding party and so I watched with envy as I dressed in my finest and waited for pictures. Clear skies
Posted by Doing It On the Road(Part II) at 3:33 AM 2 comments:

There are meteor showers and there are meteor showers. Often the term shower is used loosely and its really a meteor drizzle. Several times a year there are true showers, like the Perseid's, and every thirty three years a meteor storm occurs. That one is named the Leonids and happens in November.
The highest meteor count I ever made was in the Lenoid Shower in 1999. I held a star party and my students and I counted 347 falling stars per hour.
This morning was the peak of the Perseid's and I had no problem waking up in the middle of the  night and going outside to see the shower, (One of the advantages of getting older is the need to get up in the middle of the night).
Settling in to our new lawn chairs, and wrapped up in a blanket, I first looked at the Little Dipper. All the stars were visible and so I knew I had excellent viewing conditions. I knew that would be the case as we live at six thousand feet, with no light pollution.
The Milky Way was overhead in all its glory and Perseus was just below my zenith. Noting the time I began to count the falling stars and from 2:36-2:57 am MDS time I counted 26 falling stars. That turns into an hourly rate of seventy four falling stars per hour.
Going back inside I woke up Renita, (she had actually asked me to), and returning outside we counted 32 falling stars from 3:03--:21 am. That calculates into 106 falling stars per hour and that is one of the best meteor counts I have ever had for the Perseids!
The next seventeen minutes, 3:21-3:38 gave us 30 more meteors with a count about the same, 105 per hour. By this time Renita and I got cold, its cold here in the mountains, and she went back to bed. I stayed outside for another count and saw twenty more in the next fourteen minutes, from 3:38-3:52 a count of 86 per hour.
By this time I was pretty cold so I also went inside to calculate the hourly rates and make some cinnamon rolls. They are never as good as the ones made by my sister Connie, but that's no surprise as she makes the best cinnamon rolls in the world!
All in all it was one of the best meteor shows we have ever seen and definitely the best Perseids! Clear skies

Floating the Salt River 2016, from the Swimming Pool to Pallisades

Arriving at the Swimming Pool launch site, we noticed that the rivers level was down from the last time we made this float. Not sure what this would mean we nevertheless pushed off. Quickly we passed the first hurdle, a chute through a man made rock pile. It was one of many that allows the water to be diverted for irrigation.

The water was crystal clear and while the river was swift there was nothing challenging for the first half of the float. This allowed us to watch for wildlife and especially to look for rising trout. There were fish everywhere but we didn't bring our fly rods as this float was mainly a quick run of an unknown distance. 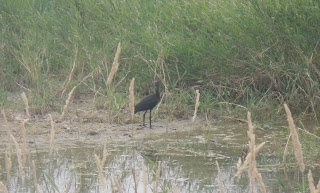 We passed great blue herons and mergansers, along with the occasional duck and osprey. The first real rapids approached and we tried to enter a chute nose first but Val hung up and was swung backwards. I stopped downstream and watched her, Smirking a bit I told her that it was easier going down the river forwards and you can imagine what happened next. Yup, I hit a shallow spot, almost flipped my kayak, and got hung up, before going backwards through the rapids. 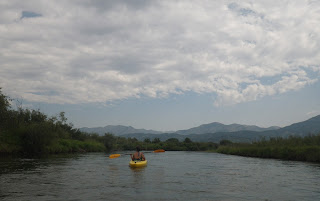 Paying more attention to the shallow spots and rapids, easy class two, we both had fun as we entered chute after chute and easily avoided any snags. In one passage we missed spotting a large submerged rock and both took a glancing blow on our starboard sides.
Twice the rapids were large enough that we were splashed in the standing waves and took water over the sides. Not a lot however and while we were wet there wasn't enough in our yaks to present any problem and require us to land and empty the water. 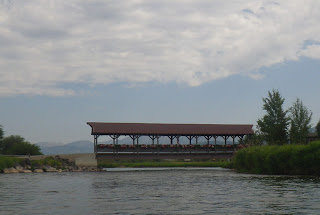 Passing the first bridge we saw that the small covered bridge had been adorned with flowers. Diversions came and went and we had a few tricky runs but nothing that caused any problems. Too soon we passed a second bridge and then the McCoy bridge. The water had been so fast that it had only taken us one hour and twenty minutes! 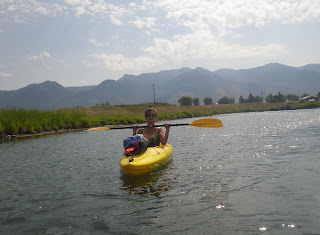 The river changed quite a bit and after passing one short rapids the stream spread out a bit. The bottom dramatically changed it's characteristics with lots of flat white clay/mud and we stopped seeing any rising fish. 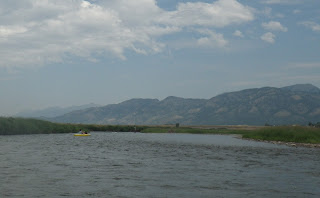 It only took twenty minutes to see George at our take out point. He helped us get unstuck in a shallow spot and didn't have anything good to say about the fishing. He had lost four flies and hadn't had a bite. It was the first time he has been skunked here and he seemed to take offense at the lack of the fishes cooperation.
We both agreed that the float had been one of the best floats we had ever had! It was a fun and quick float that only took one hour and forty minutes, but that because we hadn't stopped to fish. Now if we could just talk Renita into learning how to bof, (a method of using the fast current near large rocks) rocks and run the easy waves, (fat chance). Clear skies
Posted by Doing It On the Road(Part II) at 6:04 AM 1 comment: