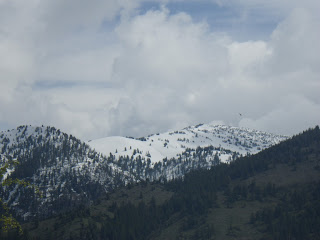 We left the grizzly bear grazing contented alongside the highway and headed down to Grand Teton National Park, (the next day a video has been posted of the female being visited by a large male grizzly and the two bears having sex alongside the highway) Regardless I am not posting any link as this is a family blog.
Our goal was to travel to Pilgrim Creek, looking for bear 399 and her two new cubs. She had her cub killed last year by a hit and run driver, inside the park. This year she showed up with two small fifty pound cubs and she is staying hidden as any males will kill the cubs. 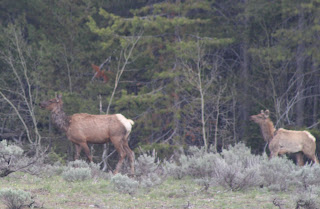 She remained hidden from us but we did see a small herd of elk. They were cow elk and they had their calves hidden, but it is obvious that she must be hunting elk calves along with fishing for spawning cutthroat trout.
Parking for lunch we ate and went for a short walk. I spotted a martin running across a field but never got an image of the large weasel like animal. Martins are larger than weasels and it’s the only one I have ever seen. It could also have been a fisher so I need to put this disclaimer in the blog. 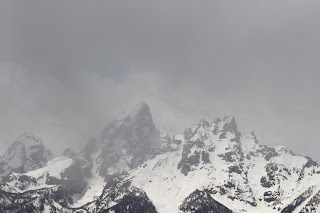 Our next stop was up Pacific Creek. There were the usual vehicles taking parking spots where bears have been seen before. The roads were closed to Ocean lake and to the National Forest Trailhead but we didn’t know if it was because of snow or because of grizzlies in both areas. It’s another area where elk cows give birth and where grizzlies and wolves prey on the young elk. 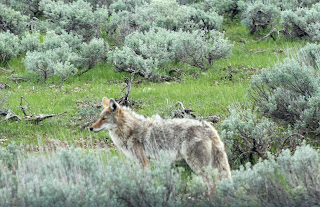 Heading back home we crossed Antelope Flats, when George yelled out coyote. Braking he pulled over as the coyote sauntered across the busy road. 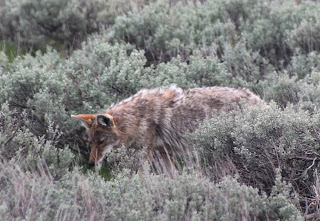 Reaching the other side, it paused and looked at us before turning its attention to moussing! It never did pounce as we watched but it certainly had heard prey. 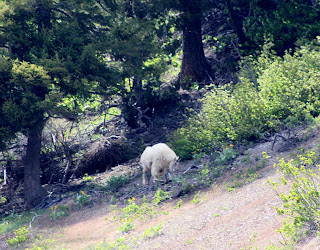 As we nearly reached Alpine, Wyoming I spotted a lone mountain goat on the cliff above the road! It grazed a bit before laying down for an afternoon siesta. It had been an exceptional day of watching Wyoming wildlife. Tomorrow we are heading to Yellowstone National Park as we have heard reports of wolves and more bears.

A Great Wildlife Day in the Tetons, Bears and Elk, and More! (Part 1) 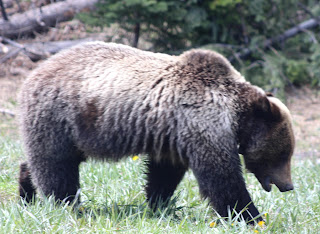 We just got unpacked, (mostly), when our friends George and Val came over to say hello. They then invited us to spend the next day searching for bears In Grand Teton National Park. Even though rocks were calling me, (we work rock into cabochons and jewelry), we quickly agreed! 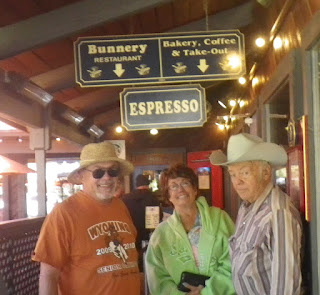 The next morning, we got an early start, about eight thirty, and headed for the park. Its only about fifty miles away. Of course, we had to stop in Jackson at the Bunnery where we purchased the best sticky buns we have ever tasted. 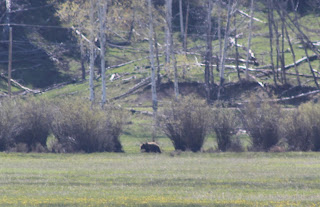 Armed for a close encounter with bears we ate the buns on the way into the park. As we passed a buffalo herd I spotted an animal and George pulled over. It was a huge grizzly boar! We watched, from a safe distance as it grazed on grass, unconcerned about the minor traffic jam. 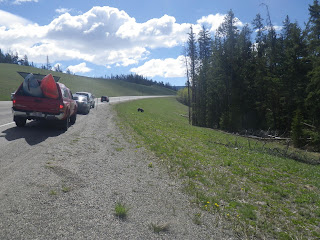 As more cars stopped, we pointed out the bear and one man told us of a bear up near Togetee Pass. He said the bear was just ten minutes above the Blackrock Ranger station and was grazing in the ditch. Deciding to go looking for bear number two we headed up the pass. 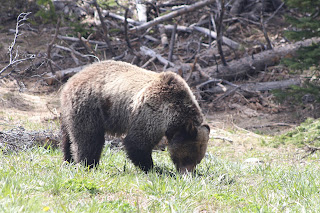 Seeing a car stopped we slowed down and there it was! Our second grizzly of the day! It was completely unconcerned with the four cars and slowly grazed toward us. You usually think of grizzlies as carnivores but they are omnivores, and often feed on the new spring grass. 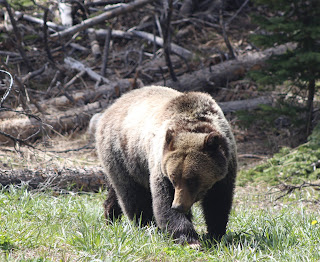 It neared us as it grazed and ended up about twenty feet away! Of course, we were inside the truck and we were all holding our breath at the incredible close contact! Now we have been close to a brown bear in Alaska but this is the closest we have ever been in the lower forty-eight 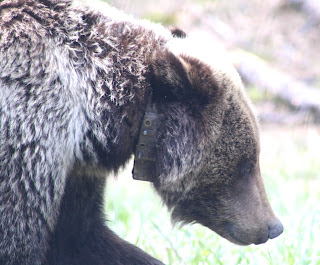 Even though the bear wore a collar and an ear tag, it obviously had never tasted human food and so it ignored the vehicles. If you are ever close to a bear, remember that a fed bear is a dead bear! Once used to human food it will eventually cause so many problems it will become dangerous and it will be killed. 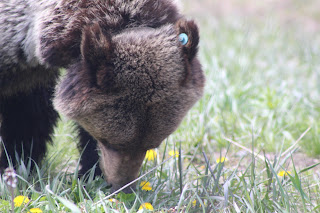 The bear finally started to graze back to where it stared and so we turned around and headed back into the park. The State of Wyoming has announced that it will hold a grizzly bear season and my question to the hunter that will kill this bear is. Will you mount the bear with its collar and ear tag, (The bear was outside the park)? 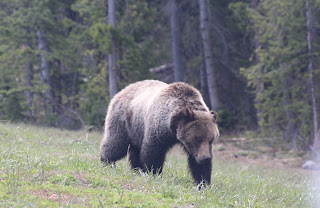 I do hope that next fall’s hunters will only be allowed to harvest problem bears. They are killed when they develop a taste for fresh cows and sheep and endanger people. Having lived in Wyoming for forty years, I do understand the problem faced by the expanding bear population. According to the latest count a population of seven hundred to a thousand now exist in the Greater Yellowstone Ecosystem and its surrounding area 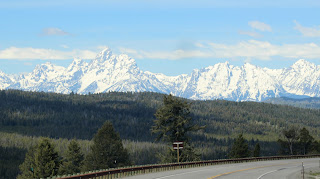 Time to get off the pulpit. Heading back into the park we next turned north at Moran Junction in hopes of scoring a trifecta, three bears in one day! We first drove to Pilgrim c\Creek but that’s for the second part of this blog! To be continued oh and Clear skies
Posted by Doing It On the Road(Part II) at 4:12 AM 1 comment:

From Florida to Wyoming, Caught in a Wyoming Blizard 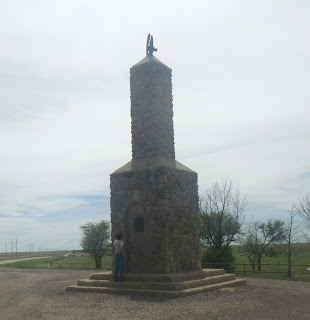 I look out the window and watch the snow as the thirty mile per hour winds blow it parallel to the ground. The fifth wheel shakes, even though our stabilizers are down, and of course the dog needs to go outside.
At least we are camped in a spot with electricity and water and that’s great as our solar panel system is covered with snow. We are here for at least two more days, welcome home to Wyoming! 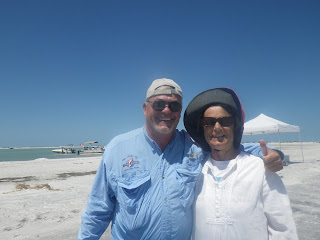 It hardly seems possible that we were wading in the Gulf, with a hot Florida breeze blowing across the Island at Bunces Pass. Leaving Florida, we flew back to Houston where we picked up our truck. The next day we hooked up the fifth wheel and headed northwest across Texas.
Two driving days of three hundred miles each, found us in Amarillo where we took a break. We don’t drive the distances we once did and now drive two days before taking a two-night rest in a camping spot. Of course Amarillo has a rock shop, and we managed to buy some excellent bright green Wyoming jade. 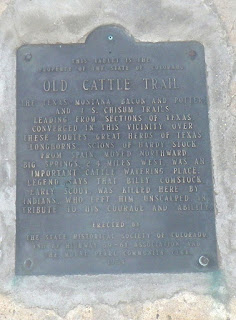 From there we drove first to Seibert, Colorado and then to Cheyenne. We try to stay at Passport America discount parks as the participating parks offer a fifty percent discount. Renita suggested a bypass around Denver and while the road was not the best we avoided all the heavy traffic. 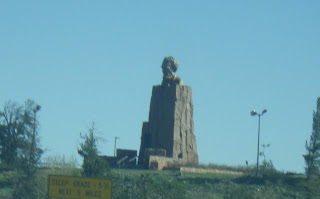 Two days of travel meant we would stay for two days in Cheyenne. There we celebrated Mother’s Day by eating out at a Red Lobster, (lol, we just can’t get enough seafood). A winter storm was approaching and so we left on Tuesday trying to beat the storm as we drove over the highest pass on Interstate 80, (The town of Buford is located there, and it is expected to receive twelve to twenty four inches of snow with sixty+ mph winds).

Lucky us, we had a strong west wind and so we didn’t have any danger of blowing over. Winds of over forty miles an hour plus make for dangerous driving in a high profile vehicle and we try to avoid driving when the wind reaches thirty. Wyoming does have a new online road conditions map and we safely made it to Rock Springs.


So we sit here and hopefully the storm will quickly pass over. The forecast is for temperatures next week that will reach the seventies. One can only hope? Clear skies
Posted by Doing It On the Road(Part II) at 7:34 AM 2 comments: 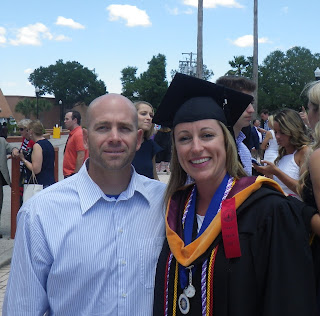 From Grand Isle, we headed north and west. After parking at Rainbows Oaks, the Escapee Park and headquarters, we woke up early and drove to Houston. Timing it just right, we got caught in rush hour traffic but we made it to the airport and had a pleasant flight to Florida.
The reason we left the rig, (and Molly who spent the time in the kennel) and flew back to Florida, was to celebrate our daughter’s graduation. Jenny has spent the last three and a half years working on her Masters, while at the same time working as a registered nurse. Luckily, she has had the constant support of her husband, Eric! 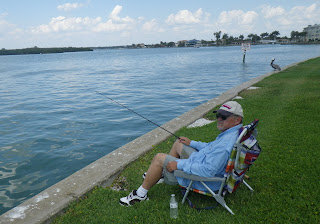 We had a day to relax before the Pinning and Hooding ceremony, so of course we went fishing. The dock provided an easy place to fish and we caught our usual various species. Mangrove snappers, pin fish, and even a gaff top catfish all were safely caught and released. 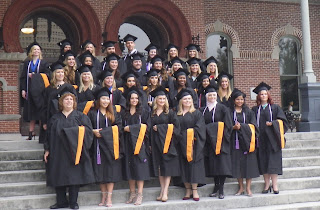 The Pinning and Hooding Ceremony took place in an ornate room of the Campus building, (this ornate building was originally a resort, but it also was the headquarters for the Spanish American War). The Pinning ceremony is a tradition that has its roots in the crusades, but was revived in the Crimean War. Each nurse is pinned to signify their dedication to their patients. 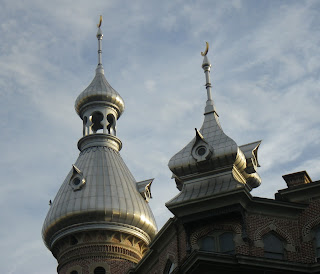 The first part of the ceremony was the usual speeches. Two nurses from the Phi Kappa Phi, an honorary nursing society, congratulated Jen and her friend Katy, both had graduated with honors. Next, as each member of her class crossed the stage, they were first hooded before being pinned. 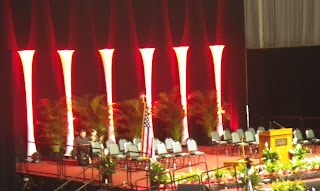 On Saturday the Universities graduation ceremony, were held at the Fairgrounds. The ceremony went quite well, although I napped during the speeches. Those with Masters degrees went first before the undergraduates received their diplomas. 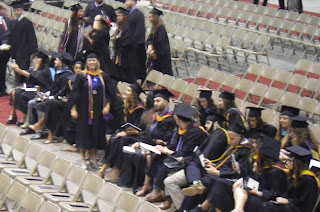 To celebrate this day Eric took us to a Brazilian steakhouse, where we had one of the finest meals we have ever had. The salad bar contained a plethora of specialties including heart of palm! The waiters served the meat on a large kebob slicing off a taste of each of the meats. These included pork, lamb, beef, and sausage. I couldn’t eat it all! 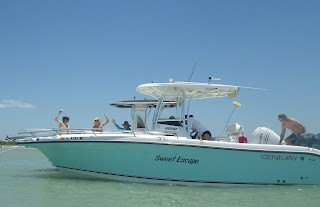 The final day Jen and Eric’s friend Mike, took us to a picnic on a deserted island. The island has no name as it is temporary and is located at the mouth of Bunces Pass. A hundred or so other boats showed up, but most people simply stayed on their boats and partied. We choose to go ashore and had a wonderful time, (Renita and I of course covered up)!

It was a great end to a special week. Jen was so happy to have us attend, like we would have missed it? The whole week went too fast. We have been truly blessed! S special thank you Eric and Jen, for the week in the Huttie Hotel, (we stayed with them in their condo). Clear skies and congratulations to Jen!