Happy Hour With the Alt Family 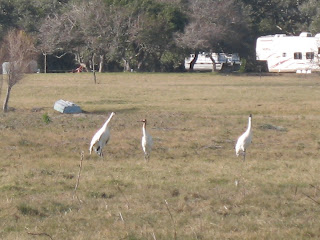 Dad was getting pissed! It was bad enough that he had been subdued and those humans had actually attached a radio transmitter to his leg. Now more were arriving and slamming their car doors. Can't a Whooper get any peace?
We decided to take a break and head over to Lamar for some birding. It was pretty nice and the sun was out so the plan was to go birding before happy hour at the park, but plans change. Loading up the binocs and camera we headed out and crossed the long bridge to the Lamar Peninsula. 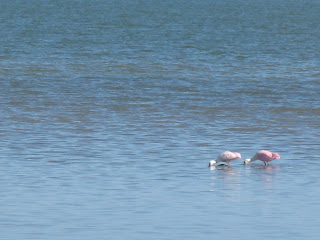 As soon as we reached the bay we saw trucks and cars with birders and a little further we saw the Alts, putting on their show, as only whoopers can do. See the Alts, an adult pair of whoopers and their chick, have taken possession of a pasture with a deer feeder.
The total count of whoopers is up a little at about 290 birds and it seems to us anyway that the population is expanding their wintering area. The lobstick family at the refuge claims about 600 acres, all though the male lost a fight with a younger male and lost some of it. 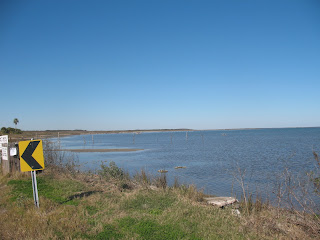 Finally the Alts had had enough and flew away as another car door slammed shut.. We drove a little further to the Big Tree shore where a second whooper family has taken possession of its own territory. This family has twins, which is pretty rare for the whoopers.  Further out we still watched them while we talked with other birders and one let us look through his spotting scope,)all though our binocs are quite good).
We finally realized it was happy hour back at the rv park, but happy hour with the whoopers is special too! If only everyone could see the majesty of these birds, their height and bearing and regal red crown! Its not hard to believe that they are five feet tall and it has been reported that one killed a feral pig with a peck from his beak! 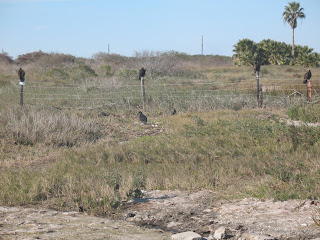 Watching we saw rosettes spoonbills land and feed. A reddish egret perched atop a duck blind. Near us a flock of turkey and black vultures seemed unconcerned with our nearness.It was happy hour after all and the Alts did return back to their pasture, landing not far behind us and rejoing the birders and birds happy hour. Clear skies.
Posted by Doing It On the Road(Part II) at 3:52 AM No comments:

Custom Design, Taking Our Art to a New Level 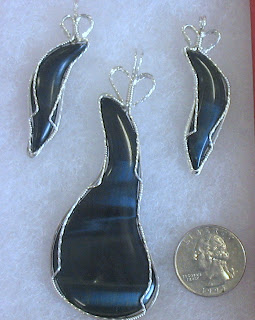 The opportunity to work with stone and metal wire has led us to the point where we simply had too much to carry and so we started selling select pieces. We found that as we made new pieces the fun was in the grinding of the rock and the shaping of the wire and that the finished piece was enjoyable for a little while but then it was better to sell it and make more.
Our designs evolved and our sales increased. We even got a custom order and then another and another. Three were from other wire wrappers and one was from our mentor Dick, who asked us to wrap his best pieces of falcon eye, a blue tiger eye, making a pendant and earrings. The challenge had been laid down.

So we looked at the abstract design and looked and finally tentatively wrapped it in copper, to see if the design worked and it didn't. The copper however gave us the chance to twist and redesign the metal and so we both gave each other input before the silver wire was cut and twisted, and it worked and it is the finest set we have made. Clear skies. 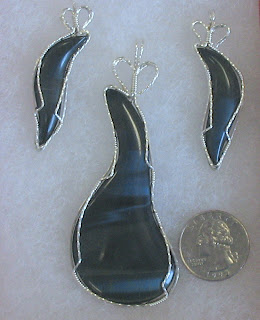 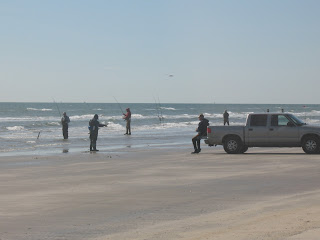 Pete announced that Thursday was the day for the happy hour bunch to do the annual day at the beach fishing expedition and so we all headed out early to get the best spot to fish and still be close to the barbecue. Hopefully we would catch some fish and then have a fish fry back at the rv park, also an annual event.
Renita and I headed out, stopping along the way to buy some fresh shrimp/ Our friend Lannie had already provided us with some frozen mullet and so I expected it to be a good day for reds and maybe even a shark.
We were on the same ferry boat with some of our group and we followed them to the beach turn off at the beach access one. I had bought a tow rope to pull out stuck people but the beach had been prepared by a grader that was still working and it was easily the firmest beach driving we have ever had. The surf was really low as a cold front had passed and the wind had shifted and so I had a good feeling as this would allow me to wade out and throw into and past the third cut. 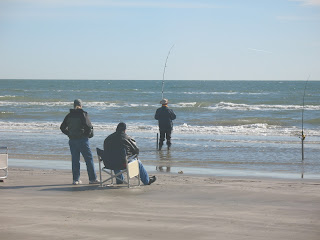 It felt cold as I waded out and I watched Charles and Jim as they both waded and cast. My new big surf rod let me make the cast and I threw the mullet to what I thought was a good spot for a big fish. Alongside me I watched as Charles caught a pompano and then a double of whiting. Even though pompano are my favorite I still left the mullet on hoping for a shark. 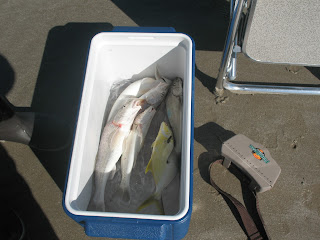 Pete and Reva, Dale and  Howard, everyone seemed to be catching fish but no shark or redfish bothered my bait. I still held out hope and watched as they caught fish after fish and that was good as I could taste the fresh fish being fried back at camp. 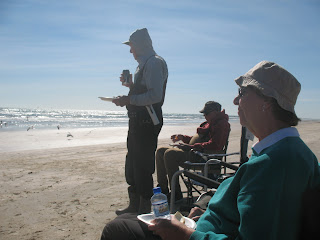 The grill was fired up and Steve became the grilll master, expertly cooking the doggs and brats, while the ladies set out tables and spread out the food for the beach feast. Of course I made a pig of myself and tried every desert, The whole group stopped fishing and ate and of course we had way to much food.
Finishing lunch I headed back to my poles still undisturbed by any big fish and I watched as Reva caught a pompano. It was too much for me to stand and I brought in my line and rebaited it with fresh shrimp. The tide had been coming in and it was harder to wade out as the surf was a growing stonger, but I stilll managed to just make the third cut. 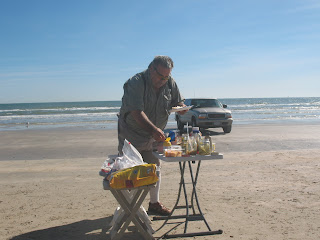 My pole jerked shortly after and I reeled in a small whiting. Another cast and another whiting and I threw this one into Charles cooler as an offering to the upcoming fish fry. More casts and more whiting as the tide continued to come in and it became harder and harder to wade out into the surf.
At the end of the day, Pete informed us that the final count of fish was sixty whiting and two pompano. It was enough for a fish fry and even though I didn't catch any reds, black drum, or sharks it was still a good day on the beach with friends. Clears skies.
Posted by Doing It On the Road(Part II) at 3:13 AM 1 comment: 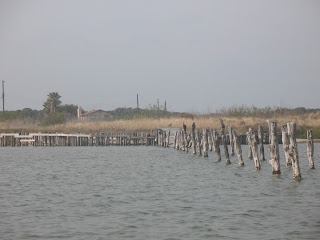 The weather along the coastal bend of Texas, has been really great this winter. A couple of cold fronts have come through but then the wind switches to the south and the temperatures rise to even the eighties. We took advantage of such a day and went canoeing on St Charles Bay.
Our wildlife viewing started on the drive as we neared the Big Tree put in spot, A family of whoopers has decided to spend the winter in Lamar and have taken possession of a cattle grazing spot on eighth street and so we passed five vehicles parked and viewing the whoopers. Arriving at the launch site, the tide was in making it was an easy launch as we slid the canoe into the water. 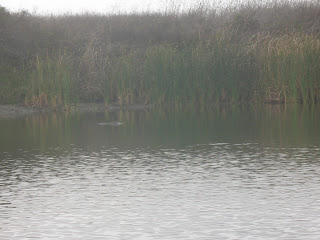 We have stopped using the stabilizers and we have picked up quite a bit of speed, and so we quickly headed towards a cut into the peninsula where several abandoned summer camps lie shrouded in tall weeds.
It's usually a good spot for herons and even cranes and the spot didn't disappoint us, in fact it even provided us with a surprise. In the back of the cut  floated an alligator which seemed to view our approach with disdain. Turning the canoe toward it Renita had the camera in hand as I tried to get closer but the gator swirled and sunk below surface. Was it being cautious or was it starting its stalk of some Wyoming snack?
Turning the canoe away from the gators last location I couldn't help but think of the kayaker in the news who disappeared as a large crocodile pulled him from his craft. My fears were needless however as the gator soon reappeared in the same location. None the less the warm temperatures made it the fist swimming gator we have seen while canoeing!
We headed further up the peninsula and passed several waders and yakers,(kayakers). One was landing a nice trout and so of course my thoughts turned to fishing and we tied up to an abandoned duck blind to cast out our poles. No fish bothered us however and so we reeled in and headed further up the bay to a large oyster bar. 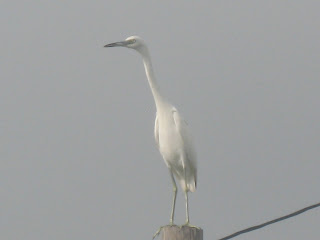 Looking for the opening into a back bay, we had canoed it last year, we passed it unfound and instead paddled around the oyster bar.which makes a prominent point on the west shore of the bay. Sandpipers fed along the shore and great egrets and American ibis, both extremely common here, waded the shallow water.
A great blue heron sat perched on a duck blind, also empty, and the water was a smooth as the first ice on a northern lake, as we continued along effortlessly. Of course mullet were jumping and it was just a beautiful day canoeing the coastal bend. 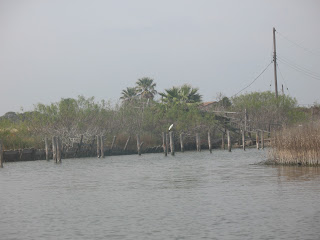 A small cold front passed and the wind shifted to the north, blowing us back to our take out point. We never did have a bite but it didn't matter, it was winter time and we were in t-shirts and shorts. Every moment we spend on the water is a blessing and a reaffirmation of our decision to go full time. Clear skies.
Posted by Doing It On the Road(Part II) at 4:56 AM No comments: