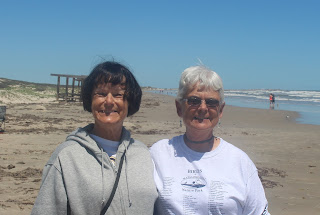 Of course the truck needed some tender loving care, (translation a turn signal short that I couldn’t find), so we dropped it off at the Chevy dealer, before heading on to Mustang Island State Park. Eating lunch at Port Aransas it was a short drive to one of our favorite places. 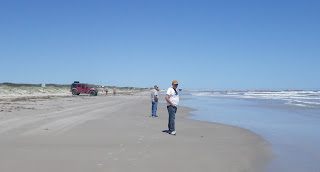 Grabbing our cameras and hats, we headed down the beach and we were sure overdressed! Beach goers must have thought us crazy but it had been cold that morning so we were okay. The tide was coming in and it wasn’t a great time for shelling but it’s always a good time on the beach and so we strolled toward the jetties. 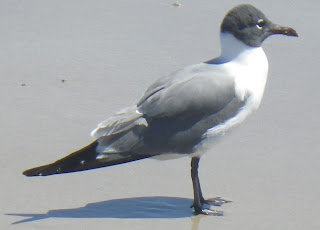 Laughing gulls begged for food, as willets and sanderlings ignored us in their own search for sustenance. Four jets took off at the nearby naval station and entertained us with their acrobatics. They were the Navy’s Blue Angels and were practicing for this weekend’s Air show. 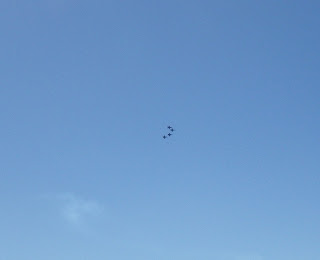 Approaching the south jetty, I walked out and watched as two fishermen fought the strong surf. We hadn’t brought our own poles and it was a good thing as the fishing conditions were almost impossible. They never did catch anything but the surf had brought the local surfers and moving to the north jetty we watched them make their short runs. 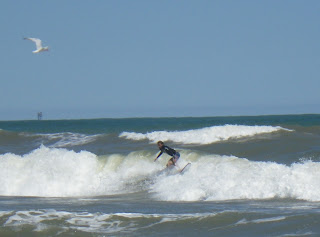 What you do with your live depends a lot on where you were when you grew up, and I watched the surfers with a bit of jealousy. Still I had been in the right place and right time to learn to rock climb and you just don’t have enough time in life to do everything you want to. 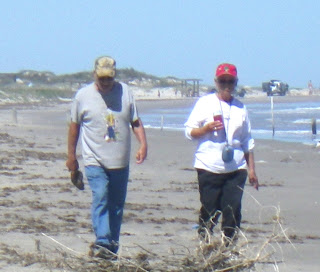 Returning to the truck the dealership called and told us they had found the short in the side mirror. I have replaced the mirror already and so when they gave me the option of bypassing it and saving six hundred dollars, I chose the less expensive option. 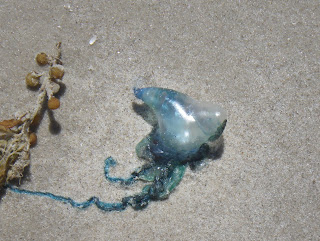 It was a great day at the beach, isn’t it always, and we returned home. We are planning on heading north on Saturday, starting our slow journey back to our summer base camp. The reports are that the bears are out of their dens and we do have a camping trip to Yellowstone planned, now if the snow will hurry up and melt! Clear skies 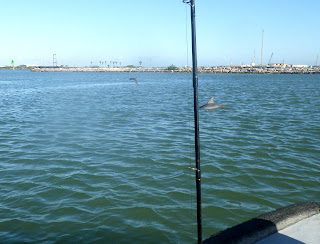 The reports were that the sheepshead had moved in from the Gulf. That mean that the Fina dock bite was in full swing. So, when Captain John invited us for a day of catching one of the tastiest fish around we quickly accepted! 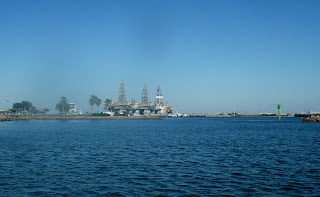 Launching the boat at the Port Aransas Harbor, dolphins entertained us as we headed out. It’s a very quick run to the Fina Dock and you can see it from the ferry. Crossing the channel, we saw many boats had taken almost all the spots. Still John noticed that one of the garages,( open places under the main dock), was empty and he expertly steered the boat into the space. 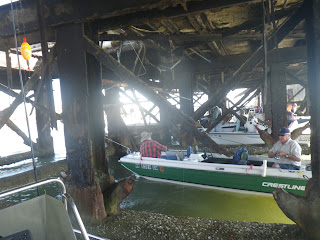 There was a strong incoming tide and we had some difficulty getting set up. However, it didn’t take long before we were fishing and had out first legal fish on the cooler. Other boats were catching fish but it was a slow bite for this time of year. 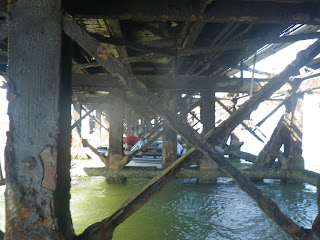 Then we all started to catch fish and three hours later we had filled our limit. Roy also added a mangrove snapper to the cooler. While they are a smaller fish they are a very tasty! The tides strength had increased and we had some difficulty extracting ourselves from the dock.
Once out, 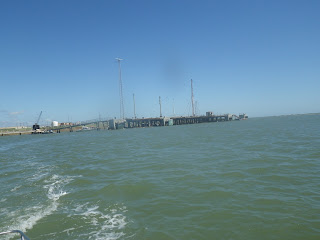 it was an easy ride to the Harbor, and after loading up the boat we got in line for the ferry. The ferry line can be an ordeal as this is the second week of spring break. It wasn’t a long wait and crossing the channel we were on our way home. Clear skies

ps Roy and I have also been busy paddling the kayaks and we have been catching a few keeper redfish. 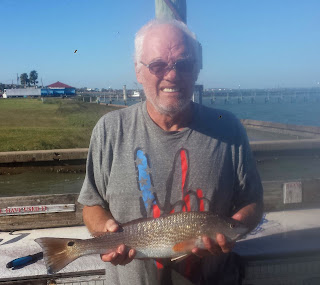 2017 The Gulf Coast Gem and Mineral Society: A Vendor's Perspective

One of the highlights of our show schedule is the Gulf Coast Gem and Mineral show, held each year in Robstown, Texas. It’s always a well-orchestrated show, drawing people knowledgeable about rocks, mineral and fossils, and a show where we get to meet new friends and catch up with past ones.
Volunteering for the setup, Renita and I arrived early Friday at the storage site. This year the club had decided to rent an enclosed trailer and the loading of the show supplies went easier then it ever has, at least in the eight years we have helped. 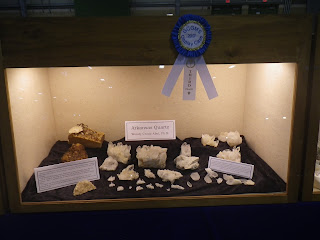 Arriving at the fairgrounds, we were greeted with quite a few other volunteers who unloaded the casework and put everything together in a very short time. After I helped with the display cases I could drive our truck inside and Renita and I unloaded our shop onto the four tables we had rented.
We bought new blue fitted sheets for our tables and it was obvious dark blue was a popular color for many of the vendor's. In fact, the club had also purchased the same exact sheets! Quickly setting up our displays we covered them with new off white sheets and we were done. 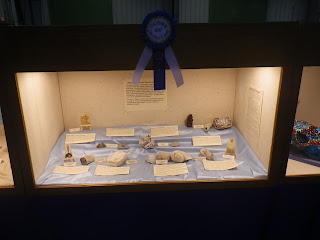 The next day we arrived a couple of hours early. This allowed us to finish our set up and gave us some time to walk around and purchase anything needed from the other vendor's. I found some beautiful blue lace agate, we can never get enough of it, and Renita located several items she just had to have. 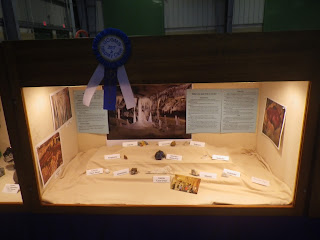 The crowd seemed larger than last year, it was raining outside, and as the day wore on we had steady sales, about the same as last year. We didn’t sell any jade as it takes a sophisticated buyer, one who understands the rarity of our highest quality Wyoming nephrite jade.
Tired we returned home where Pam and Roy had already purchased dinner. Takeout pizza is always a treat for us as the nearest takeout place, where we live in Wyoming, is about twenty miles away, (so we usually don’t have pizza during the summer). Pam and Roy are also rock hounds and we shared stories of the day’s events. 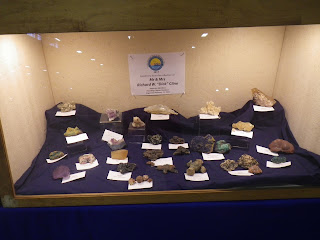 Sunday morning usually starts slow and this year was no exception. Still it gave us time to purchase more items from other vendor's. This show is not just about selling as it provides us with the opportunity to purchase rock rough and tools without having to pay shipping charges.
Sales were slow until two of our best fans showed up! I had made an order for a Tiffany stone ring and had lost the lady’s address. Having finished the ring, I showed it to her and it was a perfect fit! Purchasing it and other pieces made our day.
As the afternoon wore on three jade buyers showed up and after demonstrating and discussing the history and quality of our jade they purchased two of our highest quality pieces. (In the Olympics, held in China the Chinese government decided to showcase nephrite jade, now over nine hundred tons of British Columbia jade are imported each year).


It’s always a confirmation of our work when we sell our rarest one of a kind cabochons and jewelry. This show was no exception and we look forward to returning to Wyoming for our summer show schedule. There we also concentrate on juried shows as they draw people searching for the best, not cheap imported and mass produced items. Clear skies

ps the display cases  pictured were made by other club members
Posted by Doing It On the Road(Part II) at 5:54 AM 1 comment: 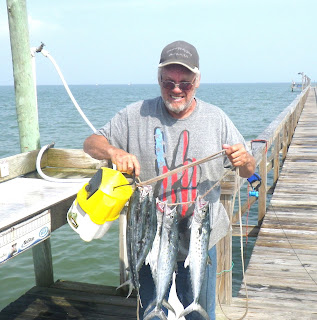 Renita’s sister and brother in law, (Pam and Roy), arrived and I couldn’t wait to take Roy fishing. I knew he had never caught a Spanish mackerel and so we bought a quart of shrimp and headed to the south jetty.
Arriving at the Port Aransas jetty people were already lined up along the Gulf side. Finding an empty space, we baited up our rigs and cast out into the feeding fish. The swells were large and we both broke off several rigs before I finally saw my bobber disappear! I set the hook as a mackerel ran with the bait and fighting it, I managed to land it. Next it was Roy’s turn.
I looked over to watch him fight his fish, as another hit mine. We had a double! The fishing changed as the fish seemed to become even more active and then I got bit off,(I had forgotten to bring my steel leaders). Finding several leaders in my tackle box, I caught two more before a fish hit the shiny new sinker and bit through my twenty-pound test fire line.
Running out of bait I put on a jig tipped with a coccoho plastic body and got slammed as a fish hit on the first cast. Now I had added two spit shot on and those also drew the fish’s attention. As I fought in another fish, one bit through my line right between the two split shot! Good grief!
I never did land anymore fish but what a blast as fish after fish ripped the plastic jigs apart! The fish were in a feeding frenzy and it reminded me of the wild time I had fishing on Grand Isle. That time my brother in law Gary had taken me red fishing and we had caught thirty-four inch average reds on every cast( one of the best fishing trips of my life).
We ended up landing seven Spanish mackerel. Our friends down the way had landed an additional thirteen, before they ran out of bait. It had been a blast, fishing the Spanish mackerel frenzy and I look forward to fishing it again. Next time I will bring more steel leaders!