Kayaking the Mouth of The Salt River

The weather here has gotten hot. It has reached he upper eighties but at least it cools off in the evening and drops to the lower fifties and even the forties. The forecast was for more of the same, with the winds dying down. That meant perfect weather for kayaking!
Our friend Val wanted to float Palisades Reservoir and after talking it over we decided to float the bay where the Salt River enters, its mouth. We unloaded the kayaks and were soon paddling across a glassy expanse. We had paddled the area several years ago and had a good day of birding, so we headed to the flooded willows. 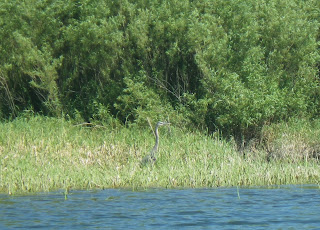 That time we had spotted cedar waxwings still occupying their nests. This year the nests were empty, and it wasn’t surprising as it was several weeks later. Still we were entertained by a great blue heron, who flushed as we neared. A flock of American White Pelicans flew overhead, but they must not have spotted any fish as they wheeled and headed back toward the Tetons.

The Salt mountains stood in the background, to the north we could see the Tetons, and the west was bounded by the Caribous. A mallard hen flushed before we could take a picture, which usually happens with birds that are hunted. We next padded to the mouth of the Salt River hoping to see a perching bald eagle. The year before we had seen an immature bald with one of its parents.
That time the eagles were calling to one another and if you have never heard eagles it a high-pitched screech.  It would probably sound a lot better, but I took out my hearing aids as water and hearing aids don’t mix.

We continued paddling along the west shore, Idaho, and drifted down the lake as the strong current of the Salt River took control of our kayaks. Finally, the drift stopped, and we just sat and enjoyed the lakes beauty.

Three hours is about as long as I can sit in my kayak, and so we decided to paddle back to the truck, load the kayaks and head back home. It was a nice day and a nice easy float. The next time we plan on floating the Salt. It’s clear now and it should be perfect for fly fishing. Clear skies

Our last Scheduled Show of the Year, Now its fishing Time 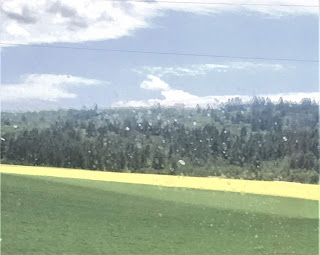 Our last scheduled show of this year was a local one. It was held in the Barn, which is a large well barn like log structure in our rv park. Its not really the crowd we aim at but we did okay for a three-hour show.
Two days later found us making another trip to Idaho Falls, this one for dentist appointments. It’s beautiful where we live but the remoteness means we spend a lot of driving time when we see doctors and dentists and this summer has been a real pain in the rear end.
As we traveled down the Snake River Canyon, we can mark the seasons by the colors of the crops. The barley is beginning to ripen, the potatoes are in flower, and the rapeseed, (used to make canola oil), has just started to flower.
There were quite a few drift boats fishing the Snake and we did see one angler fighting a big trout. Today we are heading back to Idaho Falls to another dentist appointment because the dentist had run out of supplies, (I am not kidding it was Prime Day), and they didn’t arrive on time.
Yesterday Renita had a hair stylist appointment and she let me take her car to a nearby creek, so I could spend an hour fishing. It was my first fly fishing of the summer and I had heard good reports. Nearing the steam, I spotted three other fishermen and I hoped they hadn’t fished the water I was going to wade.
It started out slow and I was pretty sure that the stream had been fished as I cast to three beautiful holes without any rises. On the next hole I cast to a cut bank and had a rise, but the fish slapped at the fly and I didn’t hook it. Three more holes and three more missed fish and I started to feel frustrated. 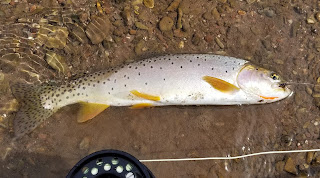 We are spoiled here as the fish are all native fish and so they are usually easy to catch. Crossing a fence, I stopped to put on a new fly, hoping that it might change my luck. On the second cast, a nice Bonneville cutthroat trout inhaled the fly and I was able to land the fish for a quick photo. Carefully unhooking the fish, the hook was in a safe spot for the fish to be unhurt, I released it and watched as it swam back to its hiding place.
A little further and I missed another fish before hooking and landing a smaller cut. Running out of time, I only had an hour, I hurried along the bank, only casting to the most promising spots. I was rewarded with four more cuts, all safely released, before it was time to walk back to the car.
Quickly doffing my gear, I was able to make it back to town with one minute to spare. Renita had gotten done early but she didn’t mind as it gave her a little time to shop. It had been a great morning, I had caught and released six nice fish, the first one was fourteen inches, and I had made it back to town in time!  Clear skies

Ps I mentioned our car and I don’t think we have told anyone that we bought a new Subaru Forester. Our thirteen-year old truck has 280,000 miles on it, and we will now be driving the car during our winter travels.
PPs If you ever come out here to fly fish be sure to be here from late July till September as the steams are usually clear and the fishing is excellent
Posted by Doing It On the Road(Part II) at 8:09 AM 1 comment:

A Wild Time in Cody, Wyoming 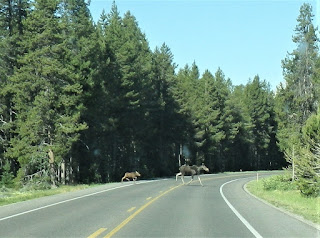 We finally finished rebuilding our slide in pickup camper and left for Cody, Wyoming. We are vendors there, at the Wild West Extravaganza. It’s our biggest show of the year and we had high hopes for a repeat of last year’s three-day show.
The trip there was a wildlife adventure! First a buck mule deer darted from the trees and stopped in the middle of the road. It forced me to slam on the brakes and the drivers behind me luckily stopped before hitting me. The speed limit was only forty-five and there were caution signs of wildlife on the road, (I was going the speed limit). 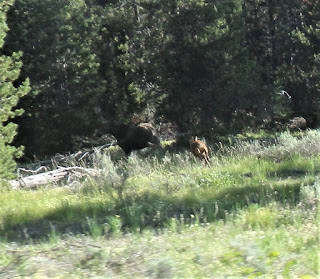 A little further a cow and calf moose decided to test my brakes, (there is a reason for the speed limit in the parks), and as we passed two stopped cars, with no place to pull over, Renita saw a huge grizzly bear! The rest of the trip was uneventful as we saw more deer and elk, but they all stayed off the road.
Driving down from Sylvan Pass is about as scenic as it gets, and the canyon reminded me of how lucky we are to live in Wyoming. Arriving at Cody we checked into our rv park and waited till five pm as setup didn’t start till six.

On a hunch we went to the setup early and sure enough the other vendors had started to setup their booths. 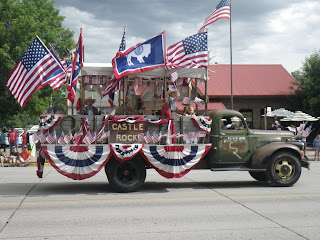 The next day we got up early and returned to our vendor tent, covering the tables and setting up our jewelry displays. People had already arrived, and chairs were set up along the parade route. The first day’s parade was small,

(the next two days parades lasted for an hour and a half. About the time the parade ended it started to rain and so we sat there hoping for some sunshine.

The rest of the first day alternated with rain and sun and the crowds were small. We were disappointed with the days sales and after some fast food we returned to our camp spot with rain, lightening, and thunder. We stayed dry, (our repairs seemed to work), and the next day we left early.

A much larger crowd had gathered for the second days parade, and it didn’t take us long to display our cabochons and finished jewelry. We have an advantage as we make all our pieces, including the rock lapidary. We also specialize in Wyoming jade and fossil and mineral pieces and we don’t have any competition, (that our shops niche). 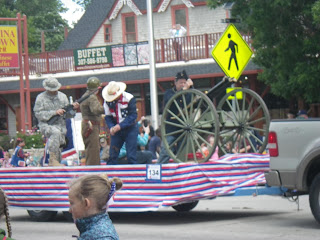 After the parade the crowds passed through the vendor area and we were happy to be greeted by many new and returning customers. The returning customers were residents, and the others were tourists from all over the USA and the world. One man told us that he was from North Carolina and it had been his life-long dream to see Yellowstone National Park. 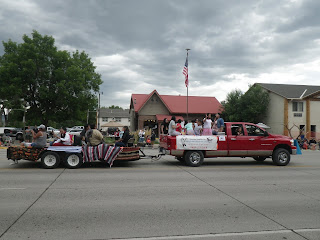 Our work was well received and we ha d a great day, even though we had intermittent rain. That night it rained, and we had a small leak along the front of the camper. Luckily the sleeping bags stayed dry and we had a cold but comfortable night. 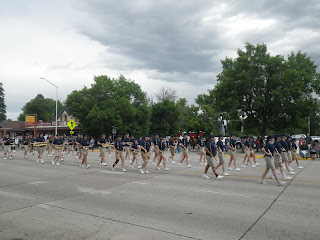 The Fourth of July started with early rains, but the skies cleared, and the rain stayed away for the rest of the day. The parade was the same as the day before, but the crowds were huge, and we were swamped for the rest of the day. We had record sales as people wanted to have a keepsake from Wyoming.
Exhausted, we tore down, packed everything away, and returned to the rv park. After a late dinner, the fireworks started, and we were very close to the exploding mortar rounds and starbursts. Shortly after it ended the rain and lightening returned to add its own excitement to the Fourth of July festivities. 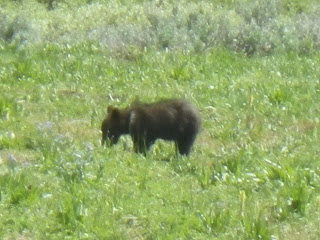 The next day we broke camp and headed home. There had been reports of a cub grizzly bear that had become abandoned by its mother and as we crossed Towgotee pass we saw the bear jam. The little cub was digging for roots and tubers and seemingly ignoring the crowd. It had grown since we last saw it but there is not much hope a wolves and boar grizzlies are in the area and both will kill such a small bear. 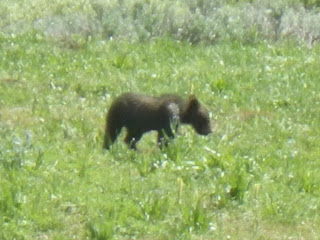 We left after a bit. It’s tough, to see a cub of the year, (coy), being abandoned by its mother. It won’t learn about berries, moths, and white pine nuts which are all important parts of a bear diet. It doesn’t have a chance or a very small one.
We arrived home and didn’t unpack till the next day. Our last show of the year is on July thirteenth and so now we can concentrate on fishing, hiking, and wildlife watching. Now if the rivers will only clear up and go down………. Clear skies.