From Branson to Tallahassee, Miles and Miles 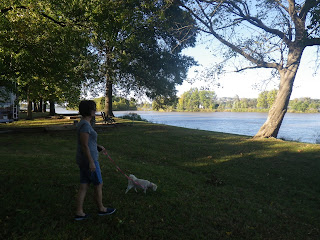 We left Branson, Mo and drove some of the hardest miles. Taking US Highway 65 south, the road turned bad, in Arkansas, from four lanes to two. Further it narrowed and old style high curbs threatened our new tires.
Pushing on into Little Rock the road seemed to be an endless series of peaks and valleys and on one I misjudged the gradient and the truck heated up. Stopping near the top of the hill I admired the view but decided I would cross Arkansas off in my new road atlas.
Arriving at Little Rock Renita found a beautiful place to camp, at Maremelle Park. It was on the Arkansas River, and being a Corp of Engineers, (COE) campground it only cost us twelve dollars a night. Sitting for two nights we rethought our route and took Interstate 40, crossing the Mississippi River and driving to Tupelo, Mississippi. 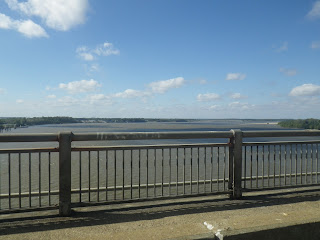 At Tupelo, I noticed that the truck was making a noise and that the alternator seemed to be struggling to keep the batteries charged. Making an unscheduled appointment at the Chevy garage we found out that the noise was in our transmission, at low gear, and that the batteries needed replacing. 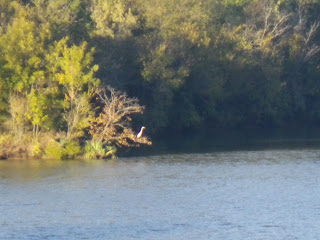 After this we had them check everything else, and getting the all clear we drove to Montgomery, Alabama. There we got lucky, it being a weekend, and got the last spot at Gunter Hill COE. It’s one of the best campgrounds we have stayed in and rested for three days before continuing our cross county oddessy.
From Montgomery, we drove south and east and finally reached Tallahassee, Florida. Here we have stopped to visit some friends Bob and Sue. We had met them eight years ago, when we started our full time rving adventures. When we met them they were also full timer rvers, but have since settled back into a house, along with their four dogs.
It’s one of the best things about being a full time rver, meeting new friends from all over the USA.  The plan from here is to rest and then stopping at Crystal River and then St Petersburg. There we will spend two months before heading back west. Clear skies.

From York to Branson. 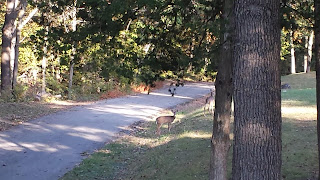 We left York with our fingers crossed and, hoping for clear skies and no more truck problems, headed for Keosauqua, Iowa. There Renita’s sister and brother were taking part in the Fall Festival. The campground was full when we arrived at Lacey Keosauqua Sate Park, but waiting patiently for people to leave, we found a spot with water and electricity.
The park is such a beautiful spot and it always brings me into focus. There are few places as quiet and peaceful. Parking the rig we drove into Keosauqua and met Pam at their vender tables in the Firehouse. Roy was working at their artist coop in Bentonsport, talk about busy retired people.

Returning to the camper we watched as the campground emptied and the park returned to normal. The next day, driving to town we had to stop as a flock of turkeys blocked the road. A tom turkey paused to show off his beard and it was the longest beard I have ever seen.
That evening deer moved back into the campground and it was as it should be. We did spend the days visiting and of course sampling the pork tenderloins, of which Iowa is famous. Our favorite was at a place called Misty’s, but they were all good.
From Iowa we drove south to Lake of the Ozarks.. We are taking our time as we cross the country and using the, "2,2,2", rule we are enjoying our stops,(the rule is that you drive 200 miles, stop by two pm, and stay for two days).  The movie “Deep Water Horizon” was playing at the local theater. As we were camping at Grand Isle, Louisiana, when the rig exploded we needed to see the film, Suffice it to say that we both cried as we watched the films story as to how the disaster unfolded.
After the film was over Renita told me she had had the same image in her mind. That was of the crosses commemorating those lost. So I am reposting our feelings from 2013. 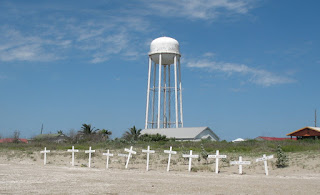 “We stopped to read the crosses, with the names of those lost during the Deepwater Horizon oil disaster. Three years ago, almost to the day and we were here as the smoky clouds covered our camper at the state park. Gary told me we had passed the deadline to file a health claim and I told him I would probably never live long enough before BP would ever pay a cent,(right now the trial to place the blame has just begin and the judge will now determine who is/was responsible).”

Oh and the charges were dropped. Companies and people with money are rarely held responsible for their actions! Now we are sitting in Bronson, Mo and the plan is to head to Montgomery, Alabama before continuing to Florida and our usual stop in St Petersburg. Clear skies
Posted by Doing It On the Road(Part II) at 5:24 AM 1 comment:

The Nebraska Gem and Mineral Show and The Clayton Museum 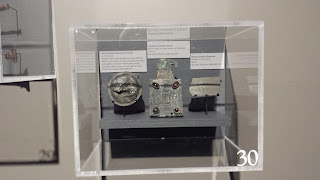 From Ogallala we made a short drive pull to York, Nebraska. The reason for stopping there was that the Nebraska Gem and Mineral show was being held in Omaha. Normally we would try and find a closer park but there was a Nebraska Home football game in Lincoln and we didn’t want to fight the rv parks near the game.
So we made the drive to the rock show and the first booth we stopped at had a lot of beautiful stone. As we left almost everything in Wyoming, we had room for new rocks and we bought some. I was really looking for dinosaur bone and other materials for knife handles as we are adding those and letter openers to our store. 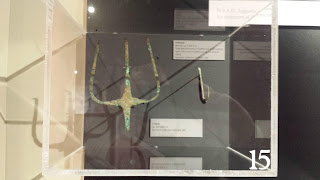 The next day we planned on driving to southern Iowa and so we got the rig ready to travel. Starting the truck, I put it into reverse and the truck started to move before jerking to a halt. Putting the truck into drive also caused a sudden lurch accompanied by a loud noise coming from the transmission. After a tow and followed by lengthy repairs, we now have a new, warrantied, remanufactured transmission. 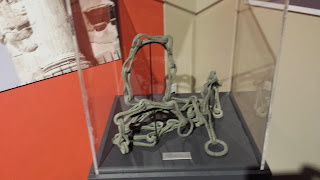 Deciding to drive around a bit, before getting back on the road, we went to the Clayton Historical Collection housed in York College. It’s a private collection of Byzantine and Roman artifacts from 800 BC to about 300 AD. 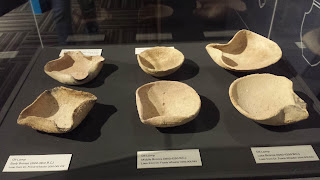 Looking for art work we found lots of cool things including a carnelian studded sword sheath, partial piece, and a carnelian engraved ring. The stones were all formed in cabochon, like the shape of the stones we grind today. The ring was used for impressing seals. There were also displays of wax seals, ancient coins, and one case had a Roman trident and a fishhook. 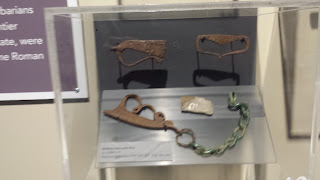 The museum also contained ancient pottery including small oil lamps and a large amphora used for storing oil, wine, and other foods. I would be afraid to purchase any of these things now as you would really have to be on guard for modern forgeries. 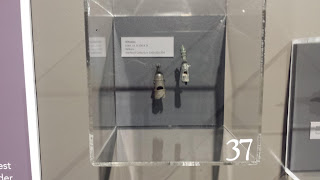 So now we are halfway to our Keosauqua, Iowa. After visiting Renita's sister and husband, Pam and Roy, we will continue on to Florida. Our original plans were to go to North Carolina and then Florida but the hurricane has devastated the areas we were planning on visiting.
In fact, my brother’s wife texted us to let us know there was flooding and rescues being conducted in their city. She did say that they were okay and that they still had power. So we are adding extra prayers for our family, friends, and all the good people of the southeast coast. Clear skies.

Off to Florida, Heading East by Southeast 2016 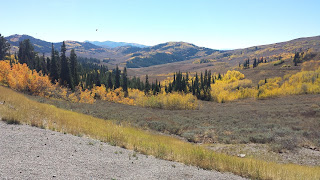 Before we left Star Valley we had to winterize our Bighorn fifth wheel. Here the snows are deep and so many buy or build boxes for the roof of their fifth wheels. The purpose of this is for safety to prevent the person who shovels the roof from falling through one of the skylights.
Draining and bypassing the water heater, the next step was to run rv antifreeze through the waterlines. It’s really easy with our rig as we have an attached hose that one inserts into the gallon jug before running the faucets till they turn pink.
Finishing we hooked up to our new, (to us), rig and headed for Casper. There I had my last doctor appointment. As we neared Casper we got an email saying my appointment was in Riverton, but we continued to Casper, and camped at an rv park.
The next day we drove to Riverton and made the mistake of stopping at two of our favorite rock shops. Exchanging lots of perfectly good money, for rocks, we left happy as we had found some beautiful Wyoming jade, a new mine find called purple sage, (a purple muscovite mica), and some finished green jade knifes. 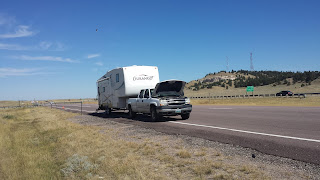 The doctor’s appointment was good, no change in my heart, and the next day we left for the long trip to Florida. Seventy-five miles down the road the low coolant light came on! Opening the hood, I saw that some hose had blown and we had dumped all of the trucks coolant.
A quick call too Good Sams and five hours later the tow truck showed up having traveled all the way from Casper. Luckily a dealership was in Wheatland and two hours later the problem was fixed. It was the same hose that had failed last year and the problem was the repair shop in Afton had used the wrong pressure hose, (I definitely intend to return next year to have a discussion with the service department). 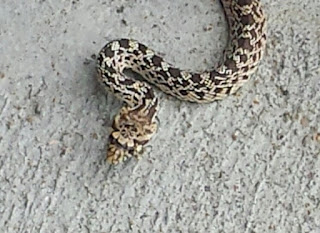 Our next hop was to Ogalalla, Nebraska and then on to York. At the rest area we spotted a beautiful baby snake which we move to a safer place. It was coiled up under a bench and it soon would have been killed by a less understanding visitor. We are now parked here for two days as there is a Gem and Mineral show in Omaha where we plan to exchange more light weight money for rock ballast for our new rig. After all Lucy, (Renita), and I can never have too many rocks! Clear skies
Posted by Doing It On the Road(Part II) at 4:23 AM 2 comments: