Obsessed With Stone and Wire

We have been so obsessed with stone and wire and that I haven't written anything for a while. Each day we get up and wrap finished cabochons, often times as pendents but sometimes as bracelets or necklaces. Each piece is different as the stone we are working is superb and unique and so today I am not going to write much more just share our new treasures. 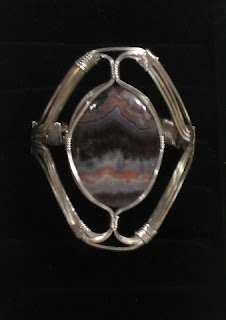 Above, is a superb amethyst and silver bracelet I made Renita for Valentines Day. The stone is from a Colorado silver mine, long closed, and it shows bands of amethyst, chalcedony, and a rare band of pink rhodonite. It contains over an ounce of silver and is the heaviest piece we have ever made. 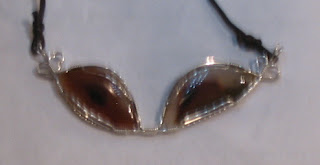 Sometimes you cut and grind a stone and magic appears before your eyes. In this case the two so looked like eyes that I had to wrap them into a single necklace. What could be more fitting for two eyes that came from the same Montana Moss Agate! 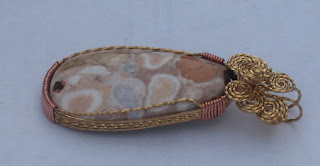 Renita works and grinds her stones, in some ways better then mine and then she wraps it in her own unique and beautiful style. She often finds rock while we are rock picking, in this case King Cobra Jasper, that I dismiss as boring and she says nothing until I admit I was wrong again. I don't mind being wrong and I always buy any rock she picks.
So the days have flown, as they do when you are retired from your past life and now embarked on a grand adventure. Our days happen to involve rock and wire and there are worse obsessions one could have. Clear skies
Posted by Doing It On the Road(Part II) at 6:40 AM 1 comment: 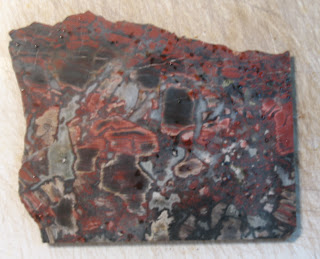 Jed Clampet once said that a man who is too busy to go fishing is too busy. He didn't say anything about the fish actually cooperating by biting. So I have gone fishing but no catching has taken place. Luckily there has been plenty of other things to keep us busy and we have been really busy since our last post. Busy teaching wire wrapping classes, making a local trip to buy rock, setting up and selling at an Art and Craft Show, and enjoying the company of friends at Watersedge.
Part of the joy of any learned skill is passing that skill on to others and so we decided to hold classes on wire wrapping. We set up a class where we are and also at another rv park. Both classes had people who signed up for them and so we have taught classes at Lagoons and Watersedge. 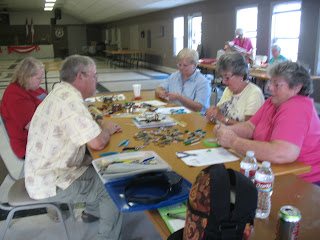 They are basically "Make and Take" classes in which we provided all the materials and some of the tools that allow the participants to make a wire wrapped cabochon pendant. The stones are ones we sawed and ground and the wire is copper and brass from our own supplies. We charge thirty bucks for the class and we don't make a lot from them but we also do sell our stones and show our work, so we do make money from the classes. So it works out good for students and teachers.
Yesterday was a day of madness in which we taught a class in the morning and set up and sold at our rv park's Art and Craft show. Our work was well received and we had a really good day as people gave us the best compliment of all, they bought our pendants and stones.
We also made a trip to Beesvilee and bought rock from a rock shop that has gone out of business. There we  found some pietersite, quite a bit of dinosaur bone, and even some really beautiful dinosaur coprolite,(fossil dinosaur poop). Its about the most exquisite poop we have ever seen and even has visible and large fragments of plant material, chewed of course! I can't wait till we can work some of it as its going to make great cabochons and jewelry,(It doesn't smell and tastes like rock)!
Tomorrow we have our biggest show at Lagoons Arts and Craft Fair. There are going to be over fifty dealers and  we our now armed with a credit card account so people can pay with plastic! WE were told by other dealers that it really makes a difference when the prices of your stuff is over thirty dollars and our prices range from thirty five to over three hundred per piece, so we shall see. Regardless we have had a good month and have lots of coprolite! Clear skies.
Posted by Doing It On the Road(Part II) at 10:03 AM No comments: 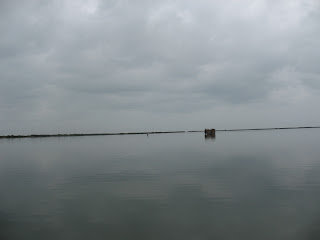 I took a step and felt the mud ooze around my wading boot as it sank deep. Moving my other foot I felt it also sink and I wondered if I would be able to get them out before I lost my balance and fell over into the thigh high water. Of course I didn't have my life jacket on and as usual I was wondering where there was a firm path of shell and sand. Dave and Ken seemed to wade through the area with ease and Ron had wisely stayed behind fishing a shell ridge. Was I that out of shape or was it simply knowing where the  firmer bottom lay?
It didn't really matter as I had already decided that today was one of those dues days,( A dues day is when you catch or find nothing but gain a little bit of experience which theoretically leads to a payoff down the road).
The day had started and I had no inkling I would be fishing Mud Island. I have been coming here for five years and it is the first time I have ever had the chance to fish the bay side of San Jose Island. Excited but knowing that it was my first time there I wondered if I would catch anything. We were after red fish and the others all had strike indicator bobbers on their lines while I was fishing a Carolina rig, a Lindy rig to my walleye fishing friends. 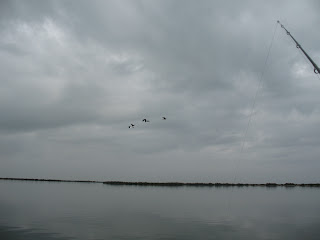 I waded and cast and stopped for a bit, waiting to see if I got a pickup. I saw Ken catch a sting ray and then Dave hooked one himself, It was a really large ray and he had to break off his line to get rid of it. After about a dozen steps I felt a pick up and waited for the circle hook to work its magic and it did! The fish made a small run and then came in too easy, it was a rat red. Now the people here call under size red fish rat reds and consider anything to small to keep and eat a waste of time, but I felt good to catch a red fish, regardless of its size. See I learned long ago, in a walleye tournament in Montana, that what ever you catch is what you catch and you should always be proud of your fish.
A little later I saw Dave set the hook and land a nice keeper red and he measured it before putting it on his stinger. It was as it should be, the captain of the boat should always catch fish and even when others out fish the captain its still about his/her skill and knowledge. The captain also gets the blame, but I have been there too many times myself and so it doesn't really matter, its all about time spent on the water, and dues days.
I never did catch another fish although I did have two pickups. We went to several other spots and Dave did catch another keeper, this time a nice twenty seven inch red. I was happy anyway, I had fished new water, got to watch experts wade fish for reds, and most importantly I hadn't fell over in the mud! Clear skies.
Posted by Doing It On the Road(Part II) at 7:23 AM 1 comment: