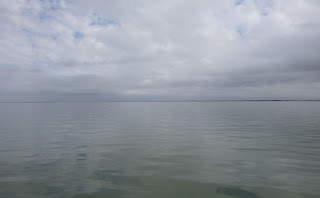 Years ago several friends showed me a spot where one could wade out and catch nice sheeps head and drum. I hadn’t fished the spot in quite a while but Renita and I decided to load the kayaks and try the old hotspot.
Pushing off we paddled a few feet and then dropped the anchor. Baiting our hooks with live shrimp we cast to several different spots hoping the fish were there. Waiting a bit, we waited some more and more and more and more. The fish weren’t there. 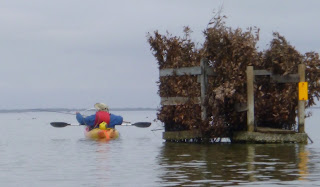 Leaving the spot we paddled further into St Charles Bay and were soon at the next spot. Repeating the process we again failed to have any hits. However another kayaker paddled past us and caught two nice speckled trout, using a plastic tailed jig. We were both surprised that the fish weren’t hitting our live shrimp so we paddled around him, making sure we didn’t disturb his spot.
Further duck blinds all marked spots and even though we were careful to make a quiet approach the fish were still absent. The wind was calm and the water still so we talked it over and decided to head back to our last chance hole. It meant that we would have a long paddle back as the wind usually comes up in the afternoon making a long tiring paddle into the prevailing southeasterly wind. 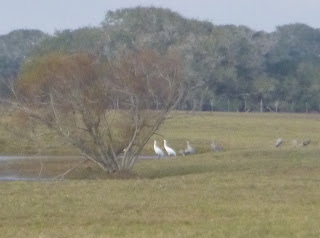 As we paddled three whooping cranes flew nearby but our cameras were stowed and we didn’t get any images, (later we would see them feeding in a field in Lamar). Reaching our target Renita cast out and quickly caught a small rat red, an undersized fish.
My turn came next and I caught a keeper black drum followed by another small red.  We got busy catching fish, most were undersize, but it didn’t matter as we were having fun. The bite slowed and so we were able to sit back and eat our lunches.

A bright pink rosette spoonbill flew right over us and again we didn’t have our camera out. Keeping an eye out for alligators I almost fell asleep but Renita woke me as she said fish on! I netted her black drum and for a while the reds and black drum alternated our poles and kept us busy.
We caught enough fish for dinner before the bite slowed. The wind had picked up and so we called it a day we as we begin the long trip back. It took us forty five minutes to return to the takeout point and we were both sore from using muscles we usually don’t strain. 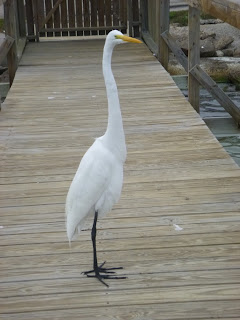 It’s always fun to float the shallow saltwater marshes, even when we don’t catch any fish. Today we had a fun day together, a good workout, a dinner of fresh baked black drum, and a nice day being entertained with reds, blacks, whooping cranes and other Coastal Bend birds. Could a day get any better?  Clear skies
Posted by Doing It On the Road(Part II) at 3:40 AM 1 comment:

A Lazy Day in the Sailboat Channel 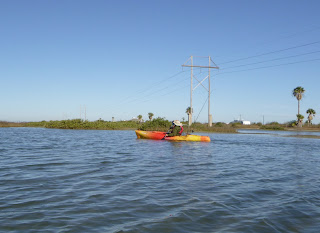 The last two years have found us kayaking and fishing the Sailboat Channel near Aransas Pass, Texas. The January cold fronts usually turn the narrow waterway into a fishing bonanza. So we were anxious to kayak and fish it as soon as we arrived at our winter spot.
So we loaded up the yaks and headed to an easy launch spot near an old channel cut. It was dredged to allow the movement of an oil rig and at one end sits a well head. Launching our kayaks we made a quick paddle into the channel and quickly arrived at our secret hotspot, (this is a well know spot fished by lots of people).

The water was as high as we have ever seen it, and even though it was only a few hours from low tide we wondered if the fish would show up. Baiting with dead shrimp we both cast to our selected spots and waited patiently for a red or black drum to make a couple of taps before running and hooking itself  on our circle hooks, (we always use circle hooks as they usually result allow us to safely release under and oversized fish).
Small fish and crabs were the only bites we had and after an hour we moved to the channel entrance. Again small fish seemed to dominate the place although Renita did catch a few nice sand trout. Deciding to have fish and shrimp for dinner we kept a couple of the trout.
A great blue heron spotted Renita catching fish and so it tried to sneak up to her in hopes of grabbing one of the trout. They are some of the best beggars and it’s not unusual to have one come near wherever you are fishing. 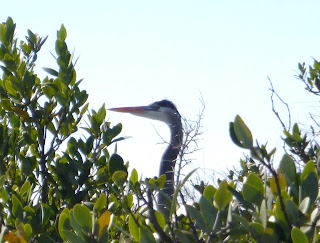 We never feed the beggar birds as one time we had one grab a fish while it was being wound in. That time I was able to bring the pelican in and grab it, avoiding the dangerous beak as I unhooked and released the bird. In the distance a huge deep sea drilling rig stood silent, a testament to the massive shut down in oil and gas drilling activity. 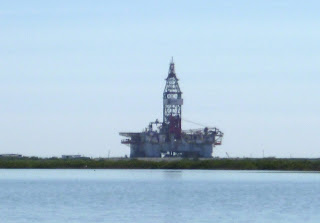 We never did catch any drums and so we stopped at the shrimp store to add some shrimp to the dinner menu. The trout were filleted and made an added bonus to the meal. It had been a nice day and a nice paddle. It’s always a blessing to be out on the waters of the Texas Coastal Bend. Clear skies
Posted by Doing It On the Road(Part II) at 5:16 AM 1 comment: 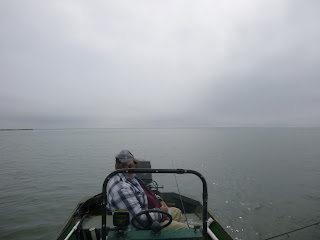 It didn’t take long before I got the hoped for bite. A couple of light taps and then my pole doubled as the black drum took off on a run. Lifting my rod high I hoped the fish wouldn’t get my line tangled in the sharp oyster beds.
The tide was running out and so the fish crossed all of our lines as we moved poles trying to keep from making a giant mess. The fish actually circled the boat before making another nice run. Finally bringing the fish close to the boat Dave reached out and netted the beautiful twenty four inch black drum.

Arriving in Rockport I heard that there was a great black drum bite going on. Renita and I had purchased our fishing license and had spent a less then fruitful afternoon at the Goose Island State Park pier. Still we had seen several keeper sheephead and one forty inch black drum being caught and released.
So the next day, when Dave asked me if I wanted to go out in his boat I jumped at the chance! It was a calm day, somewhat unusual here, and we quickly ran out to the intracoastal. Passing oyster bed after oyster bed Dave turned the boat into a narrow channel before easing up to a protruding shelf.
I eased the anchor in and having a good set cast toward the edge of the oyster bar. Nothing happened for a while until I got a couple of light taps. Sometimes a red drum will take the bait lightly and swallow the hook as it lays down. Starting to wind in I had a good fight on my hands but it was an undersized red, called a rat here. I had to cut my line to keep from injuring the fish as it had swallowed my circle hook. 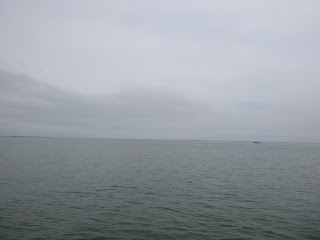 Moving to another bar our luck changed, Dave had found the fish and it was a hectic time as we alternated catching beautiful slot fish, (black drum have to be between 14-30 inches to keep). It didn’t take long and we put the last fish in the cooler. Fresh fish for dinner tonight! 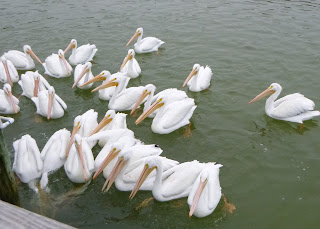 The pelicans, gulls, and herons all crowded us as we cleaned the fish. We weren’t the only ones having fresh fish on the menu. Thank you Captain Dave! Clear skies
Posted by Doing It On the Road(Part II) at 4:31 AM 1 comment:

From Grand Isle to Fulton, Texas 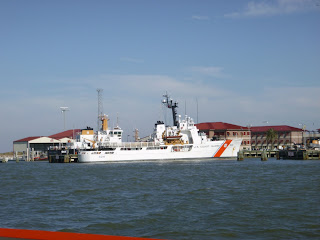 Goodbyes were all said and so it was time to leave Grand Isle. Of course the first leg was pretty short as we just had to stop at Betty’s Rv Park, in Abbeville, Louisiana. We wanted to stop and say hello and we also wanted to show Betty the Louisiana Opal I had bought for Renita.
The Park was pretty empty but there were several regulars we had met before. I knew Dan and Merlene were there as soon as I walked over to the dumpster. I could hear the sound of a guitar emanating from the open door of a familiar looking motor home. 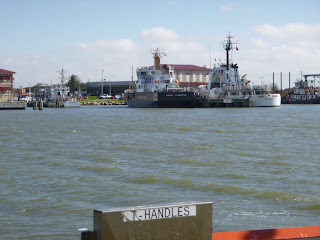 We also saw Maryann who had just won a big bucks at the casino. There were a few other new people there but they weren’t feeling well and so stayed in their motorhomes. Not knowing if we will return this spring we said our goodbyes and headed off to Galveston.
Crossing the ferry we drove to Galveston State Park. We were looking for an inexpensive place to stay and the bay side rv pads were just the ticket. Although they had said they were forty feet in length we were able to back in without unhooking. 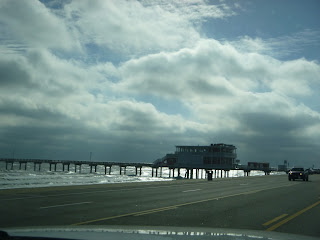 Another front was threating and so we took off the next day. It was only one hundred and eight miles to our winter location, in Fulton Texas. It’s so nice to reach a place and have friends come out for the hugs and warm welcomes.
Two of them, John and Dave had been out fishing and had caught a great day catching nice black drum and sheepshead. Dave told me it was the best black drum bite he has ever seen and I couldn’t wait until I had a chance to go out as Renita and I love eating black drum.
So now we are here at Blue lagoons Rv park for the next three months. Lots of time to fish, kayak, bird, and grind and saw rocks. Also time to just rest from the miles and miles since we have left Wyoming.