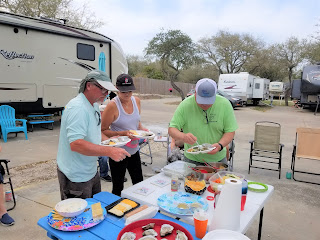 Our time here is Texas is drawing to a close. It is a busy time as many of our friends are leaving next week and so we have had celebrations and even a Crafts show in the clubhouse. We would not do any of this if we did not feel safe and we do because most of our friends have had their covid shots, (in our group of seventeen only two are not yet vaccinated. 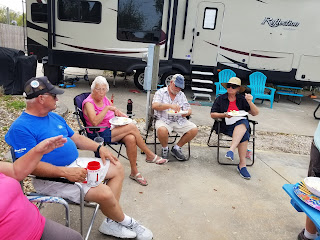 Our Happy Hour Group has learned quite a bit about oysters. We now have four more shuckers and so it takes no time at all to shuck half a sack of the delicious morsels. 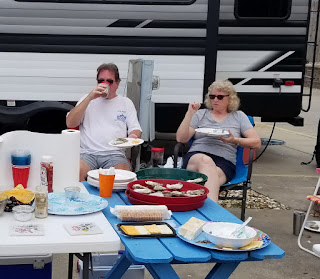 On a personal level I have learned how to make oyster Rockefeller and oysters in a garlic butter sauce, so I prepare three dozen for each oyster fest. 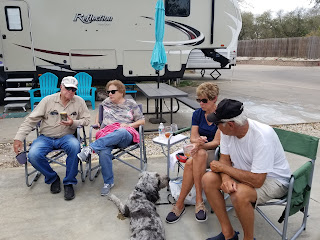 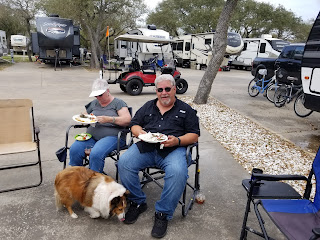 John and Nina put on a breakfast feed of biscuits, sausage and gravel and Renita and I volunteered to help. I helped Alan to cook the scrambled eggs and both of us helped to dish out the food. It was excellent! 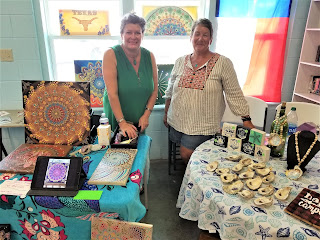 We also have had our first craft show of the year, and while it was smaller than the usual one it was a success. 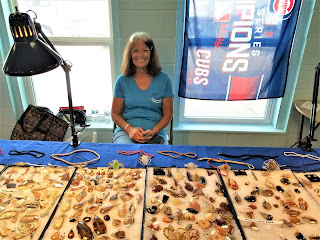 It was combined with annual trash to treasure event and so all the tables were filled, with the craft show being on the window side. 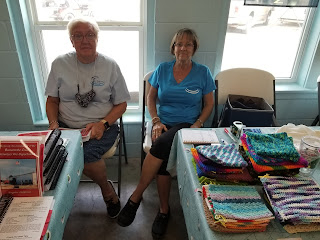 The third event of the week was a crayfish and shrimp boil, hosted by Alan and Zita, in which the morsels were prepared with varying amount of spice. The hot crayfish, (spicy), were exactly right to the ones that love heat, and that includes me. There were quite a few cooks and so we stayed away from the broth. 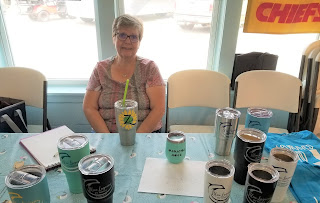 So, before we all leave a hearty thank you to all shared the winter with us and who stayed safe, we will see you down the road!

Ps If you are curious about the rv full time lifestyle see the movie “Nomadland”. While our lifestyle is not exactly like all of the movie, we have made friends with many who live in every type of rv imaginable. Not all work camp and we do not consider ourselves as working even though we prospect. make cabochons and sell at some juried art and craft shows, (Are you working if you love what you are doing?).

Birds in flight, Big Black drum, and our second shot of Moderna 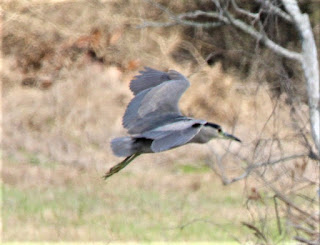 It has been an extremely busy week, besides going birding at Lamar. Last Saturday we traveled to a mass vaccination clinic where over three thousand people received their second dose. Finally, on Monday Dave invited me to go fishing and so we headed out to one of our favorite spots. Each one of these events could have been a separate blog but all are going into this single entry. 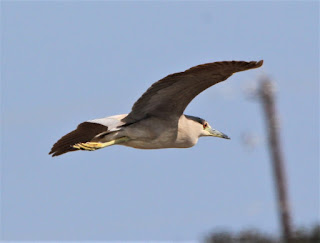 We took over three hundred and fifty pictures during our last birding trip to Lamar. Concentrating on the Lamar Whooping Crane fight I found that we had a bunch of bird pictures that I wanted on the blog, (all of these images were taking with our new Sigma lens and we are in love with the results). 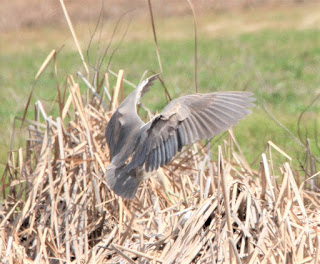 As we watched the whooping cranes near the feeders a flock of night crowned herons flew into the cattails and as they landed, I was able to take some of my best flight shots of night crowns. There was also a Sandhill crane standing back from the whoopers, but it did not approach, only looking longingly at the feeder. 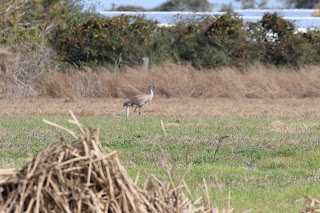 While driving up Eighth street, an American kestrel hunted in the field while a flock of sandhills fed in the background. 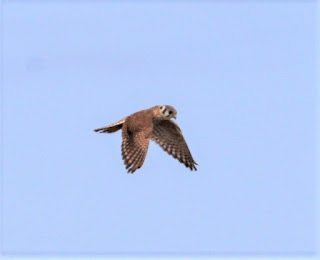 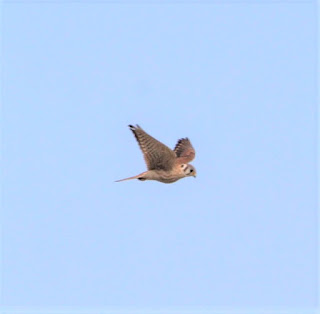 Driving to Big Tree, we walked around but the birds were quiet, except for two Black Vultures, (Florida Vultures), that landed above us and kept watching us to see if we would die, (its nice to know that nature plans to recycle us soon after our passing). 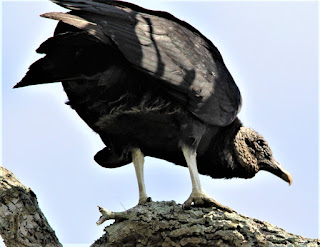 We also took pictures of rosettes, alongside the pond, and while they are not the best pictures we have ever shot, they were practice for our spring birding adventure at High Island, Texas, and Grand Isle, Louisiana. 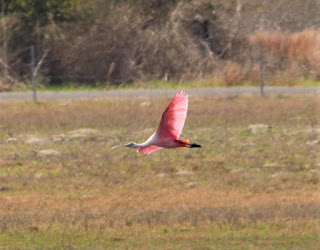 Waking up early on Saturday, we grabbed some egg burritos and made the drive to Robstown Fairgrounds for our second Moderna shot. As usual the mass vaccination was well run, and they even started early so by nine thirty we were on our way back to Rockport.

Unlike the first shot we had side effects. That evening we both felt fatigued, developed a fever and chills and Renita had some nausea. Sunday was not much better, but our fevers broke and by Sunday night we were almost normal! We so look forward to being able to travel again and stop and see friends and family!

On Monday I was completely recovered and so when Dave stopped by to take me fishing, I readily agreed. We went to one of our favorite spots and while the bite was slow, I did manage to catch the biggest black drum I have ever caught.

I had respooled my new reel with fifty-pound braid and I needed it. The first fish I caught was a big black drum that took my bobber under and then ran between two piers that were covered with barnacles. As we were near to the metal, I beams I was able to hold my pole near the opening and the fish made several huge runs. It finally stopped and I was able to gain line.

As the fish neared the opening it then ran the other way and as my line spooled out, I cold feel the line as it was rubbing against the sharp shells. Luckily, I was able to finally stop the fish and regaining line the huge fish came up and surfaced before making a fourth run.

Finally, the fish yielded to my pressure and swam back though the opening. Meanwhile Dave had kept the boat away from the pier and the fish ran out to open water. Now it was simply the question of how damaged my line was. I could see it was frayed in spots but I needed to land the fish quickly so I could safely release it. Dave slipped the net over the head and then folded the fish in. It took both of us to bring the fish into the boat where I snapped a picture and tried measuring the fish using a thirty-six-inch board. The fish was bloated with roe and I was able to lift it over the boat side. Reviving the fish, it swam back down, a good release. We estimated it at over fifty pounds and about forty-three inches.

Back fishing, Dave caught a keeper speckled trout. Moving to another spot, my bobber slowly disappeared, and I had another black drum. This one ran between low support structures and I had to just let it run and hope for the best. This time I was using a different pole with the same fifty-pound line.

The fish snagged the line but by releasing the bail it freed itself and the line held! The fish reversed itself and ran back through the opening into open water and again I was able to gain back line. When the fish surfaced, I gasped as the fish was larger than the first.

Dave netted it and we both struggles to lift it into the boat where I cut the lines, it had tangled itself in my other pole. Took an image I tried to measure it. It was about two inches longer and I had to use both hands to lift it and slide it over the edge. Dave estimated it as over sixty pounds, (His personal record black drum was forty-nine inches, caught years ago in The Lydia Anne Channel).

We moved to another spot and I watched as my bobber again vanished. It was a third huge black drum but this one was a huge male. The fight was easier as it ran out to open water and the only real excitement was keeping it away from the anchor line, boat keel, and motor.  It was another good release of another huge fish.

By far the best day of big black drum I have ever had. I was too tired to fish anymore and so we motored back to the boat dock and went back to our rv park. Thanks Dave and of course, clear skies! 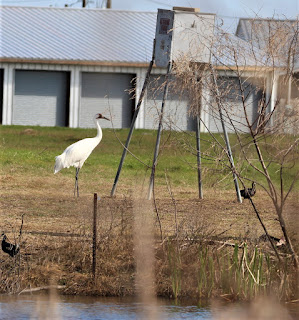 This year we have spent more time watching whooping cranes then ever before. Most of this has been at Lamar, Texas. One of the big draws that attracts so many whooping cranes is the abundance of feeders. These feeders drop a mix of deer feed that the large birds cannot resist. 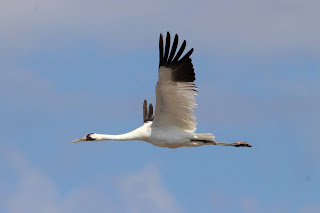 The feeders are on timers and it does not take long before the birds know when to go to a feeder. Added to this is a change in the juvenile whoopers behavior as some are reaching maturity and are pairing up. Several new pairs seem to have formed. 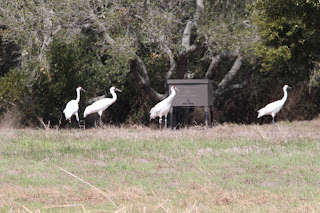 Driving down fourth street, we spotted a pair of whooping cranes near a feeder. These cranes took off and flew towards Blackjack Peninsula, where we have noticed a pair wading and fishing. Driving up eighth street we watched the mature dominant pair, that controls this territory, napping and so we continued on. The next part of our drive was then down twelfth street where we saw the usual rosette spoonbills, black belied whistling ducks, vultures, coopers hawk, and a hunting American kestrel. 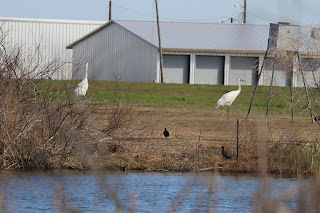 Deciding to return to fourth street we saw that the pair had returned to the eastern most feeder and that they had their necks straight up. This usually means a challenge is taking place and to the west four whoopers had just landed at the feeder to the west. 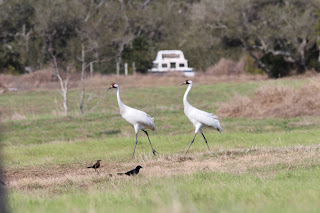 The pair marched towards the other birds and then leapt into the air flying the short distance before landing among the other cranes. 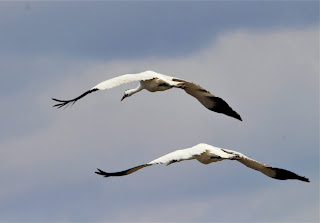 Now usually the dominant male will make his threatening display and the other will take off, but this time they both squared up and calling to each other spread their wings and opened their beaks. 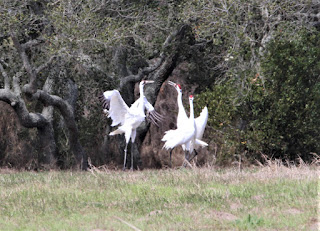 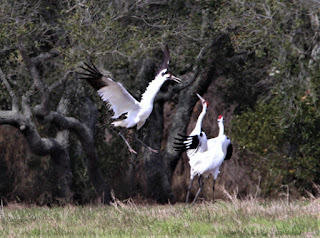 They stabbed at each other and then one leapt off the ground and before landing kicked at the one that had just arrived. 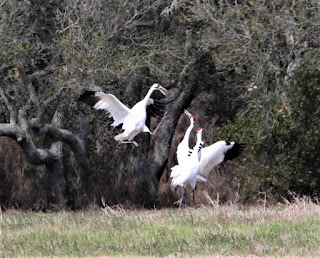 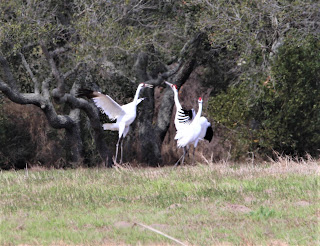 Both had their beaks open, and we could hear them squawking at each other. Several more leaps and thrusts took place before the pair, that had challenged the four, took off and flew back to the other feeder. 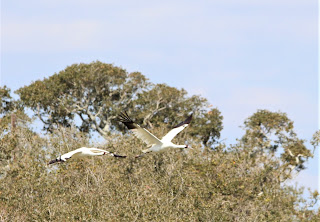 It was over and we had just witnessed a whooping crane fight! The whooping cranes will not be here much longer, and we have heard that the Florida flock has already returned to it breeding area in Wisconsin. If you ever see a pair of whooping cranes stretch their neck straight up stick around. You might get lucky!  Clear skies