Summer Plans, Heading into Yellowstone with our New(used) Truck Camper 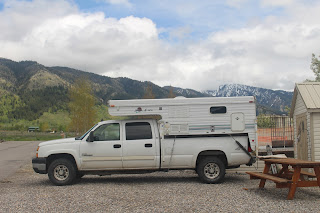 For the past eight years, we have been blessed to explore our country and we have found so many remote places to visit and further explore. However the size of our rig, fifty five feet when hooked up,  means that we can't get into many of them and therefore we have been limited into making day trips.
While in Alaska we saw many people with truck campers and so we have purchased a small pop up truck camper for overnight trips into remote areas. Tomorrow we hope to head into Yellowstone park for a three or four day trip concentrating on wildlife viewing. Its only one hundred and twenty miles away.
It has finally stopped raining and should warm up into the seventies! Now if we can just figure out how everything works and not pack it too full, (no rocks on this trip). we should be good to go. We still plan on traveling year round, but the big rig will be parked for the next four months. Clear skies.
Posted by Doing It On the Road(Part II) at 5:57 AM 2 comments: 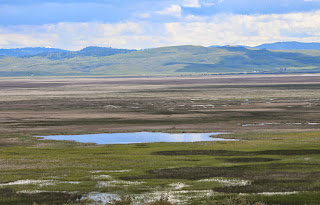 The large brownish birds definitely were not ducks. However I couldn’t really see them clearly as the camera’s viewfinder doesn’t show a good view of what you are imaging. Renita however had her binoculars on the pair and called out, “White faced ibis!” We have only seen one other in south Texas and so here was a special treat. 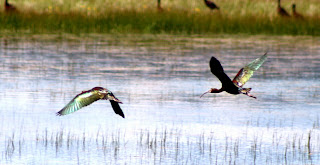 They flew across the small waterway and I was able to catch a shot of them. I didn’t have the sports setting so it was again mostly luck to capture them in flight and then to image the brilliant sheen of sunlit green breeding plumage.
We had passed Grey’s Lake Wildlife Refuge last year, during a day’s discovery jaunt and we planned on returning for a day of birding. The past weeks rain finally broke and we woke to sunny blue skies. Renita packed our lunch and it was a short drive through the Caribou Mountains to the refuge.
Our first stop was at the refuge headquarters and driving to the lookout point we were warmly greeted by a cloud of mosquitos. You could barely see the water here as the place is actually the largest hardstem bulrush marsh in the world. 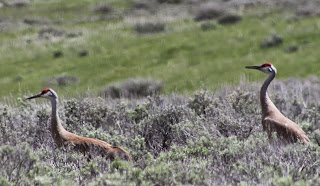 Known primarily for its sandhill cranes it also hosts a small flock of breeding trumpeter swans, although we didn’t spot them. Good, but muddy, gravel roads, (for Idaho anyway), allow one to drive around the marsh, and bird from the comfort of your vehicle. 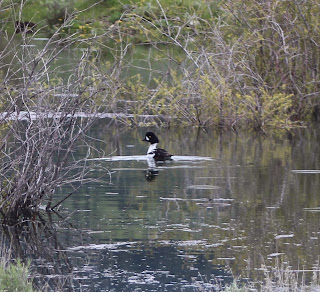 At every stop Western Meadowlarks entertained us with their song. At another spot Renita got a picture of a Barrows Goldeneye, and further on she took images of pairs of American Widgeons and Pintail ducks. 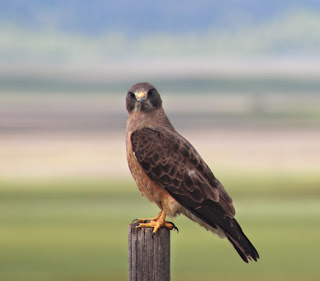 As we drove along a Coopers Hawk posed on top of a telephone pole, followed by a fence perching northern harrier. Spotting a soaring red tailed hawk, we stopped to watch but didn’t see it swoop down on prey as its spirals grew wider and higher. 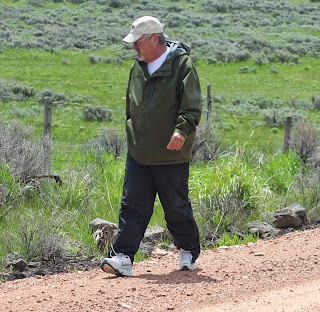 At one point there were just too many rocks along the road and Renita was able to capture another image of a strange bird, a Wyoming rock hound. A high ridge allowed us to see the extent of the marsh and some open water. Wilsons phalaropes, curlews, franklin gulls, killdeer, all entertained us as we drove the circuit.

A day of birding was a nice break from the usual daily tasks and while we saw lots of sandhill cranes the beauty of the white faced ibis stole the day! If you are ever here don’t be surprised if we try to drag you to a day of birding at Greys Lake Refuge. Clear skies
Posted by Doing It On the Road(Part II) at 4:35 AM 2 comments: 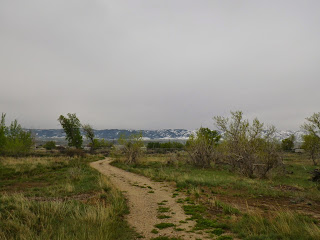 The sun warmed things up and the snow quickly melted, leaving the roads dry. Hooking up we left Rapid City and drove two hundred and sixty miles to Casper, Wyoming where we stayed the night.
The next morning we decided to push it and so we crossed the Wind River Mountains at South Pass.
From there we descended into the Red Desert and our route paralleled the Oregon Trail. Oregon Butte, Eden Valley, (and ts famous fish and petrified wood beds), passed quickly. Both are places we hope to prospect this summer.
Crossing the Green, we turned north and saw a herd of wild horses. They were in their usual haunts and we were glad to see that the wild horse roundup didn't catch them all. Fontenelle and then Kemmerer where the fish beds again beckoned. Perhaps we will dig again for fish this year. Renita was driving now and so I rested and watched the landscape go by. 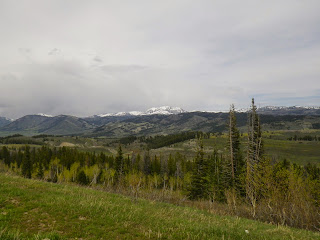 The wind picked up and I returned to the drivers seat. Renita spotted the first pair of sand hill cranes. They are in their breeding colors, a bright brownish red, so different from the somber grey color we are used to in southern Texas.
Reaching the Salt Pass, elevation 7600', we stopped for a moment to check our brakes before heading down to Smoot and Afton and Grover/. No one was manning the check station for watercraft, (we had already been checked at Sundance Wyoming), but still we stopped to make sure we were following the law. 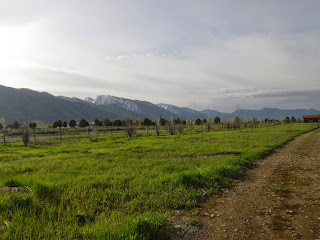 Thayne was just a little further down the road and turning east we reached our summer base camp, Star Valley RV Resort, where we have purchased a lot. There is lot of snow just above us and it will be awhile before we fish the Grey River and push off our kayaks to float the Salt River.The days drive was three hundred and ninety miles, a huge day for us but now we can rest as we have no plans but to sit and enjoy the area till September.
Right now a strong low pressure area is bringing rain and snow at higher elevations. The snow has descended to seven thousand feet but we are at sixty two hundred so its just rain. Today looks like a good day to work on some of the stone and fossils we have purchased, a craft day!
Clear skies
Posted by Doing It On the Road(Part II) at 6:03 AM 2 comments: 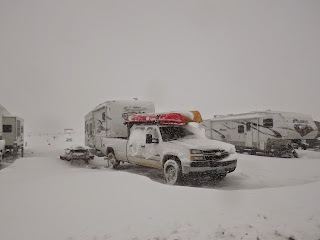 Its Mothers Day and Renita got a special gift from Mother Nature, A massive snow storm in Rapid City! As its the first time we have been caught in a snow storm since we have been full time rvers, I thought i would share our preparations for being snowed in!
Now most people would stock up on groceries, but being rockhounders we took off for a day of searching for Teepee Canyon Agates, after all that was the main reason we came here in the first place. 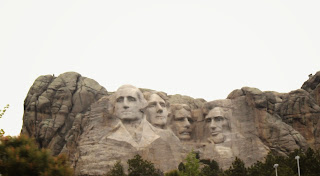 The day was full of rain and so we limited ourselves to the rock shops as we really didn't want to tromp and wade through mud. After seeing the prices I have decided that the one piece we have for sale is priced way to cheap!
Still we were able to purchase several small pieces, think rings, and we were also able to purchase a piece of Fairburn agate. Another purchase that was unique to the Black Hills were four ammonites/cephlopods from the Pierre Shale, all from private land and all therefore able to be fashioned into jewelry and legally sold. 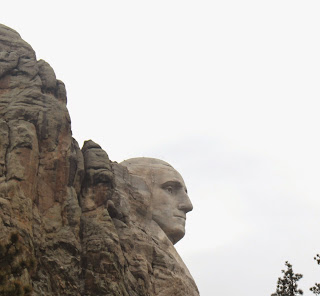 We did drive by Mount Rushmore but stopped at turnouts for photos. Having been here many times before we didn't want to pay the eleven dollars for parking our truck. Privatizing Mount Rushmore's parking lot is something that really grinds me.
As the day passed we started to notice deer out grazing. Although that's a sure sign of a major storm nearing, the radar was still free from snow and we continued our quest. Of all the rock shops we visited The Rock Shed in Keystone was our clear favorite. 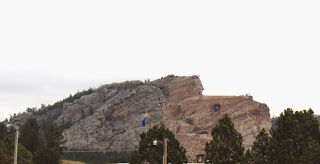 We did finally get back to our fifth wheel and did do some preparations. The two main things we did were to slide in all three slides and to unhook the water supply as its going to get below freezing. We also purchased a catalytic heater in case the electricity went out for an extended period of time.
So we are dry and warm and watching the drifts build up outside. Molly isn't sure what to think and is hopping through the snow when we take her out for a walk. Its been a while since she saw snow! Everyone here is thankful for the moisture so snow is always good here! Still we are wishing for clear skies!
Posted by Doing It On the Road(Part II) at 8:27 AM 1 comment: 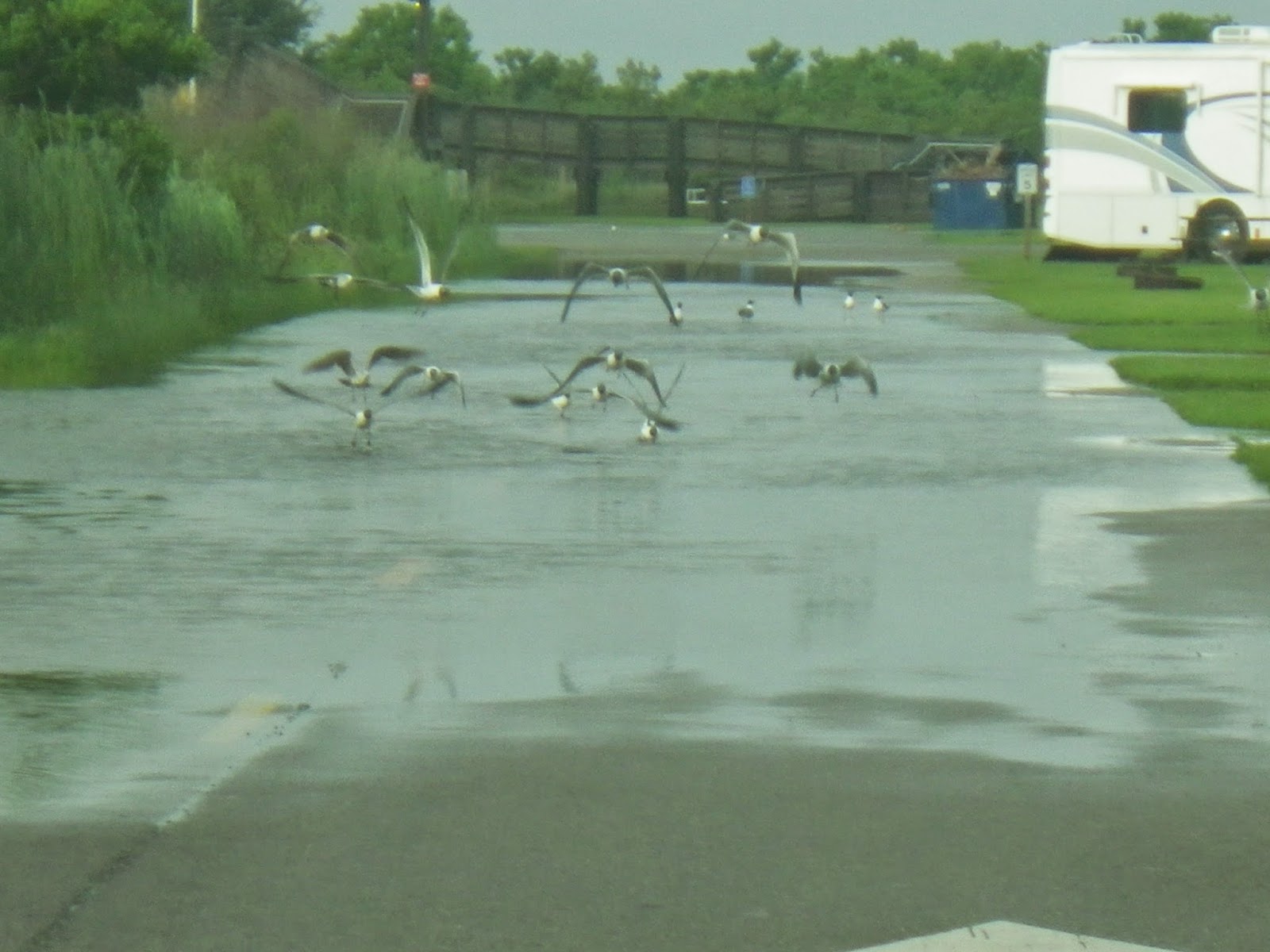 We delayed our departure from Grand Isle, Louisiana as another huge storm brought heavy rains, high winds and local flooding. Leaving the next day we had to drive through fresh water as the water table here has risen from the deluge,
Our first day was a long day as we drove three hundred miles to Beaumont, Texas. The next morning we headed to the Escapee Park in Livingston, Texas. There we did laundry and stayed an extra day to celebrate Renita's birthday. 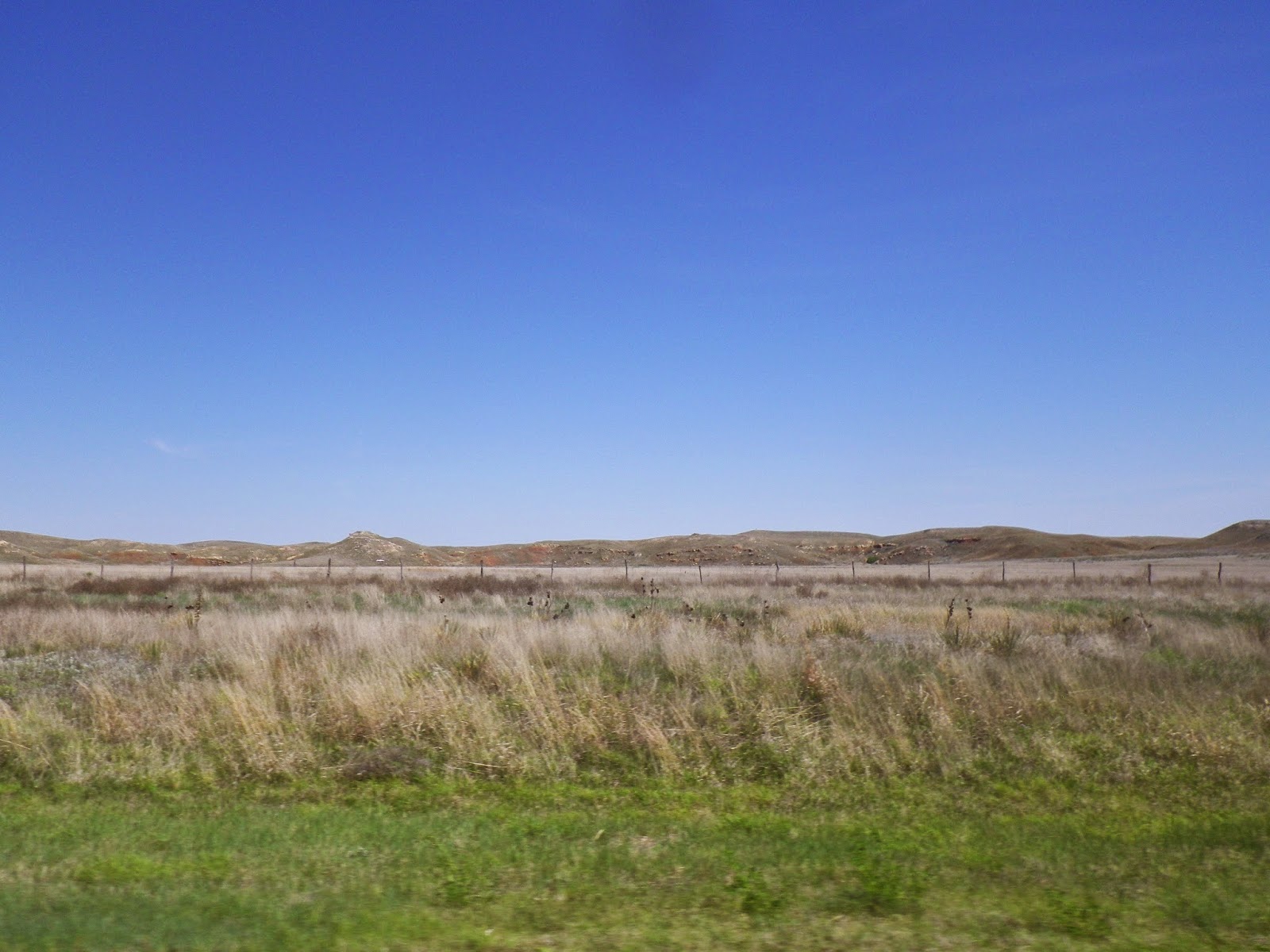 After a two night stay it was time to cross tornado alley. A break in the storms appeared and so we did four three hundred mile legs in a row. The first night we ended up in Ardmore, Oklahoma, day two in Dodge City, Kansas, the third day found us parking in Ogallala, Nebraska, and the fourth day we ended up in Rapid City, South Dakota. 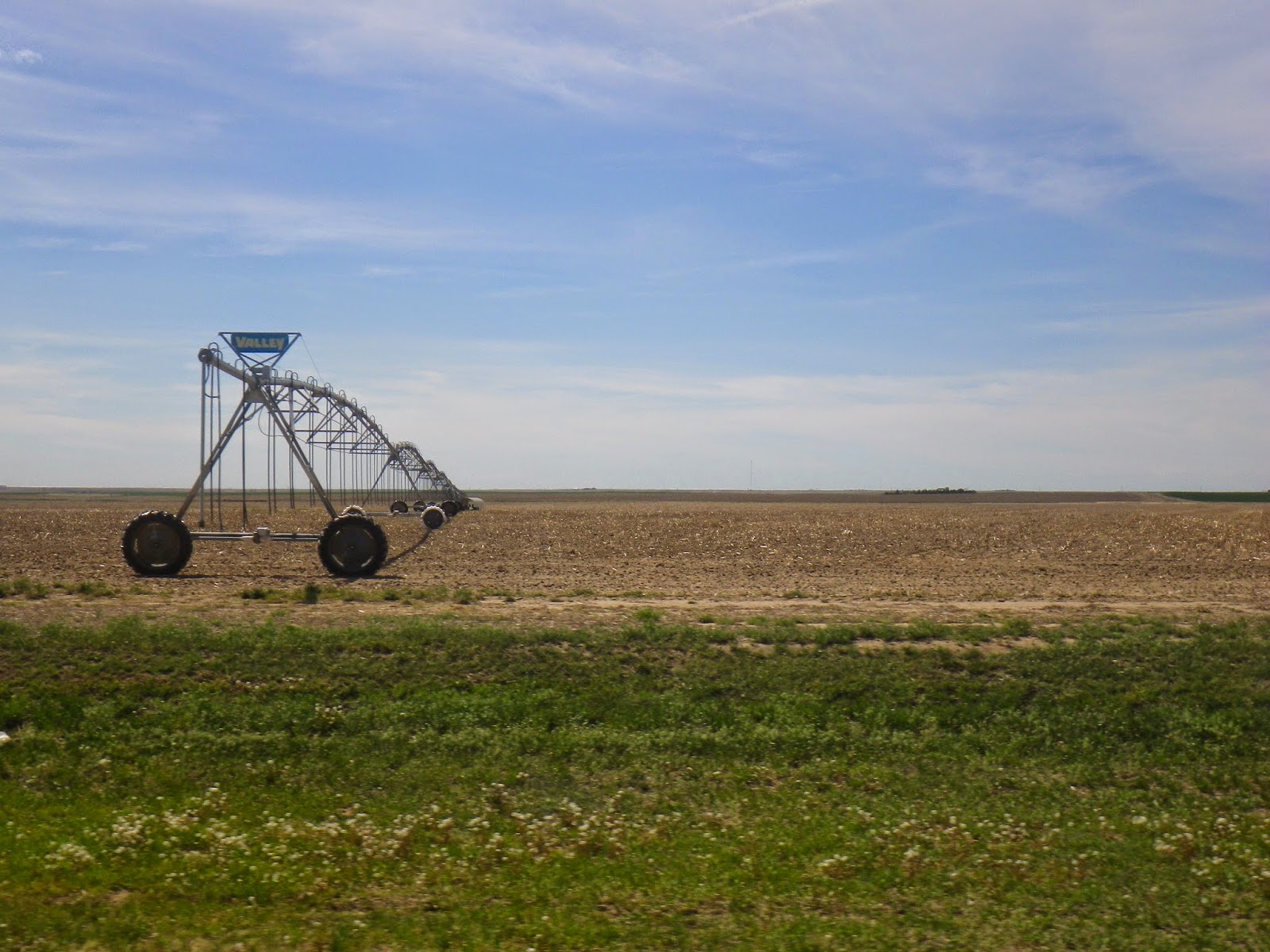 Here we had a nice day and then the temperatures have dropped. Snow is forecast for the upper elevation on Mothers Day, so we are resting here for a week before crossing Wyoming and ending up in Star Valley at our summer base camp.
Hopefully we will have a break in the weather here as we want to go rock hounding at some of our favorite places. The forecasts don't look good but we really love the Black Hills and Rapid City so its always a good place to sit and recuperate from the long haul. Clear skies
Posted by Doing It On the Road(Part II) at 7:12 AM 1 comment: