A Day at the Beach and the South Jetty, Spanish Mackerel 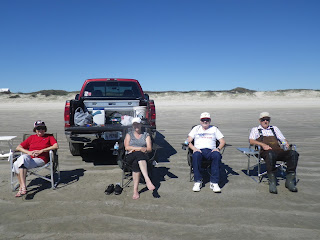 Our happy hour group decided to go to the beach for a day of fishing, beach combing, a barbecue, and just plain relaxation. The group wanted to go to the Mustang Island Beach instead of the usual day at the Padre Island National Seashore. 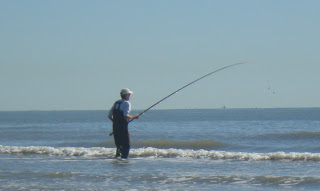 We left at eight and crossed on the Port Aransas ferry. Turning onto the beach access road we headed down the beach until we spotted John’s truck. He had already picked out a spot that was relatively weed free. Spreading out the fisher people among us cast out our poles and almost as quickly we had bites. Unfortunately, the fish were bait stealers and Dave was the only one to catch one. 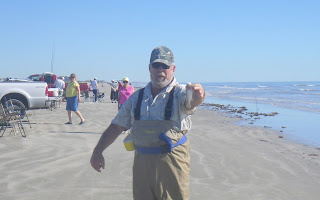 The day was beautiful and any day on the beach is good so we rebaited the poles and cast out again. Dale did catch several whitefish, one of which was really nice.  Terry caught another, but that was it. Still the hot dogs tasted good and we successfully enjoyed our beach lunch. 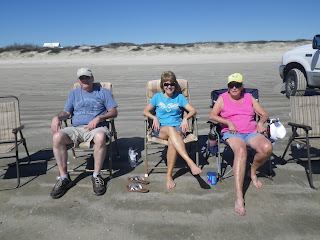 On the way back home, Renita and I decided to drive the beach. Not much was happening, fish wise, but the beach was lined with cars as it seemed like everyone had decided to have a nice beach day. We arrived at the South Jetty just as a lady was landing a small stingray.
Renita suggested that I should walk down the jetty and check out the fishing, and I was glad she did! People were catching Spanish mackerel! I watched awhile and took some images so I could find the spot myself.


The next day John, Dave, and I arrived early. Our buckets were full of live shrimp and I hoped the fish would still be there. The waves had built and it was tough to fish the mackerel side. Another mackerel fisherman walked out and cast out several times before stating that it was going to be a bad mackerel day as the waves were too large. 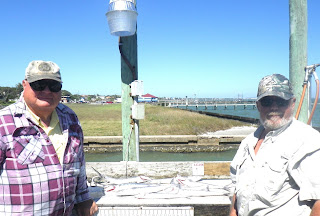 After he left two more mackerel fishermen arrived and one caught a Spanish mackerel! We moved further out and Dave had a strike, yelling for the net. I arrived with the net about the time he hoisted the fish over the rocks.
Before too long John caught a nice Spanish mackerel and I tried to will one to bite on my pole. One did bite and as it ran the hook didn’t set properly. A hour passed and no more fish, or even bites. Suddenly my bobber disappeared and the line tightened as a fish made a run!
I had changed to a larger circle hook and it worked as the fish hooked itself, I had my first Texas Spanish Mackerel and then two more before John set the hook on his second fish. The waves continued to build but we did end up with eight mackerel! 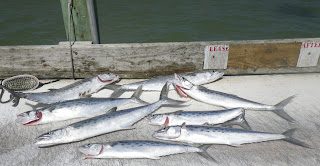 Back at the rv park I told some other fishermen that we had caught Spanish mackerel and most turned up their noses. People here seem to think that the only fish worth eating is redfish. Several told me that they had tried to deep fry them and that they had tasted terrible.
Spanish mackerel are an oily fish, like salmon. They need to be grilled and I had a great recipe! First I fired up the grill and let it get really hot. Putting the fish in a fish grilling basket, I seasoned them with Cajun seasoning, olive oil,  and a dab of butter.

Letting them grill for five minutes I squeezed lemon juice on the fish and turned them once. Testing them with a fork they flaked and we sat down to a delicious meal of grilled Spanish mackerel, grape salad, garlic toast, and risotto.
Anyone who doesn’t like Spanish mackerel learns to do two things. First get them on ice as soon as possible and second throw away the deep fryer. The limit is fifteen a day, that tells you that the fish are sustainable and seldom harvested.


Now if the weather would break and the waves calm down, we could go out there again! Clear skies
Posted by Doing It On the Road(Part II) at 8:17 AM 1 comment: 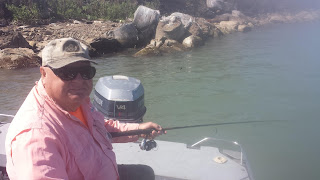 We have had limited success fishing. Every time we go out the wind comes up, or the weeds wash in messing up our lines. Our fishing score was fish three and us zero. Fortunately, we went out a fourth time and did catch some sand and speckled trout, enough for a nice meal. 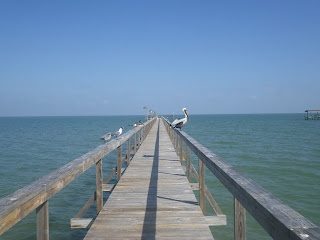 So, when John and Nina invited us to go fishing in their boat we jumped at the invitation. To top it all off the sheepshead were biting and sheepshead are some of the best eating, and hardest to clean, ocean fish that swim. If you have never caught them they fight like crappies on steroids!
Arriving at the first spot Nina quickly caught the first keeper. Then the fish seemed to have moved and we only caught one more keeper, (here in Texas they must be fifteen inches). John decided to move to another spot and soon after arriving Nina caught a four-pound fish. 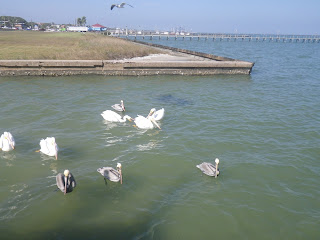 Then it was my turn to land one that was also destined for the skillet. Soon we were all catching fish and in less than three hours we had our limit of twenty fish. Back at the rv park we stopped to clean the fish and I prepared myself by donning a steel glove.
The fish have razor sharp gill covers and awesome dorsal fins. They also have teeth that feed on oysters and can just as easily crush fingers. John showed me up with his cleaning skills cleaning two fish in the time it took me to clean one. Still I caught on and we soon had a nice pile of fillets. I am trying to eat less deep fried fish and so we dusted the fillets in flour before sautéing them in a butter olive oil sauce. As they cook quickly I also added sliced tomatoes along with capers and lemon juice. Suffice it to say that it was an all you could eat fish dinner with plenty left over for future dining! 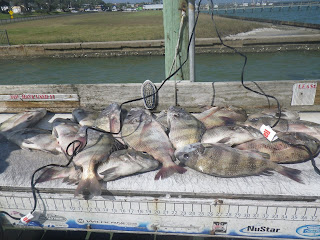 Tomorrow our group is heading to the beach as the weather is going to be in the eighties and the waves should be calm. Our goal is to catch some pompano and if you never have had pompano you are missing another great ocean treat! Clear skies
Posted by Doing It On the Road(Part II) at 1:12 PM 1 comment: 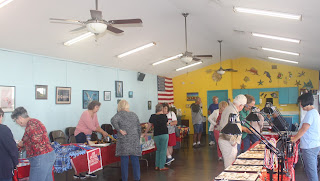 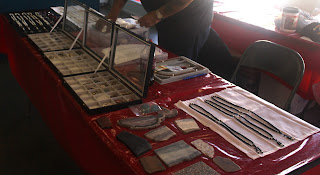 Jim not only brought his rosaries but also had three cases of wire wrapped stones, along with Mala prayer beads. These are used by people of Eastern religions during meditation and prayer. 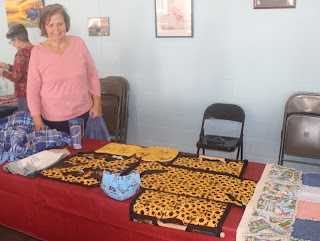 Zita and Nancy proudly showed their quilts and other sewing projects. 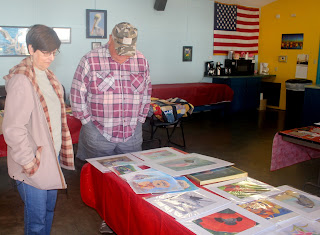 A new park resident, Evy filled a table and chairs with her beautiful watercolors! 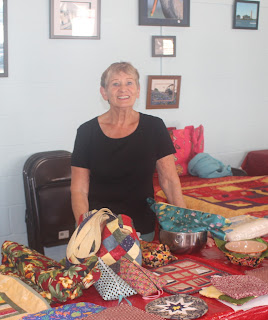 Shirley demonstrated her kumihimo beading techniques! She has been taking quite a few classes at the local bead and craft store. Her wire kumihimo bracelets are superb! 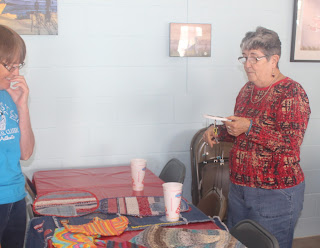 Others, I am embarrassed that I didn’t get their names, shared their embroidery including many works in progress. 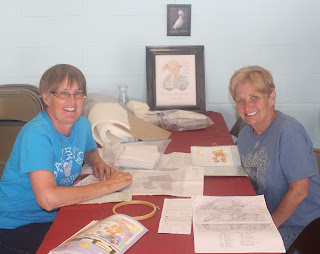 We did miss several artists from past years, they moved to Florida, and several commented that Pat’s classes on Chinese cooking were sorely missed. Still it was a very good show and we hope to see it expand even more in the coming years! Congratulations to all the new artists who proudly shared their work! Clear skies
Posted by Doing It On the Road(Part II) at 10:30 PM No comments: 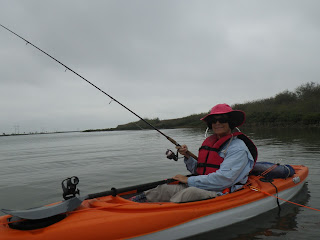 The fishing, for us anyway has been poor. Still we are optimists and so we loaded the kayaks and headed to the Sailboat Channel. There have been times in the past when we have done extremely well there, catching nice red fish and black drum.
Arriving at one of our favorite spots we had just anchored, baited up, and cast out when Renita had a bite. She missed the fish but when she cast out again she set the hook and landed a nice sand trout. My turn was next and I caught a fourteen-inch speckled trout, undersized, but still a fish! 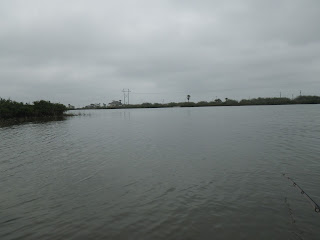 For the next three hours, we had bites as fast as we cast out catching mostly sand trout. Deciding to keep some of the nicer ones we started to place them in the live bag. By the end of the day we ran out of bait and had twelve nice sand trout and the prospects of a fresh fish dinner! 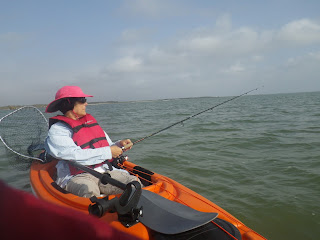 Two days later the weather was calm enough for us to return to a previous spot. It didn’t last long however as the wind and waves picked up, but not before we both missed nice bites, in fact the hardest  bites we have had all year. 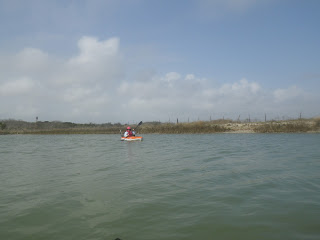 Driven in by the wind, another kayak landed at the same time and the fisherman proudly showed us his limit of nice reds! Now of course we couldn’t wait for the wind to die down and that was three days ago. At least we know where there are nice fish and fish we can reach with our kayaks!
Posted by Doing It On the Road(Part II) at 7:38 AM 1 comment: 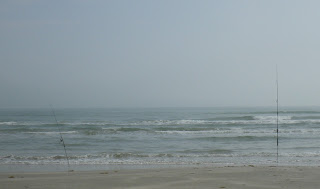 The tide was going out, and so we really didn’t expect much as we set the pole holders, baited up with shrimp and Gulp, and cast out. Still one can always hope but instead of a bite the lines quickly fouled with seaweed. 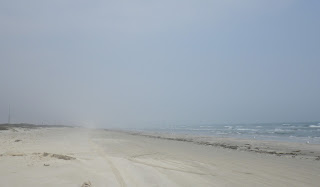 We had checked the tides, wave heights, and driving conditions before we had headed out. The beach driving was as good as we had seen it and we easily drove past the five-mile sign. After the first few miles, the beaches were deserted and so I picked a spot with a break in the waves 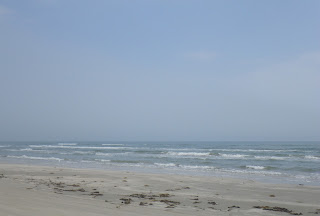 I am not sure that it matters but a break in the waves can be a sign that something is different. What I was hoping for is a location where rip tides form as fish seem to hold in such a break, waiting for bait to follow the strong out going current.
While I cast out poles Renita, Dan, and Barb set out beach chairs and a table and we all waited patiently, well I did anyway, for a fish to bite. The next hour and a half was not good as the lines filled up with seaweeds and we spent all our time reeling in, cleaning off weeds, and then wading out to cast again. 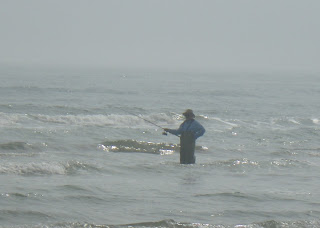 As I groused about the poor fishing, Barb reminded me that any day at the beach is a good day and so I shifted my mental gears. Ten years ago, I would have been trapped in a room without windows, trapped with twenty-eight teenagers all wishing for the end of the school year. 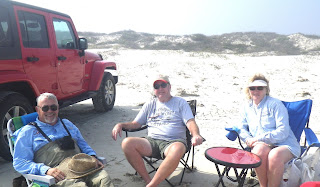 Sitting in the beach chair I joined everyone for lunch and we lazed away the time. It was now slack tide and so the fishing was poor, but I still hoped for some bites as the tide came in. The fog refused to burn off but it was a nice day, temperature and wind wise. 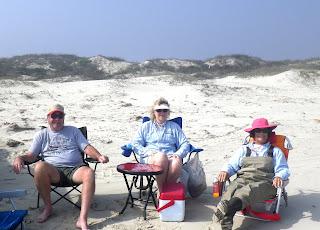 All though we did have several small fish steal a few baits., we never did catch any fish. It was a nice day for a picnic on the beach, a nice day to get acquainted with new friends, who are also full time rvers.
Stopping by a fish monger, on the way home, we bought some mahi-mahi and baked it following a new recipe we had found on the internet. It was a perfect ending for a perfect lazy day on the beach. Clear skies