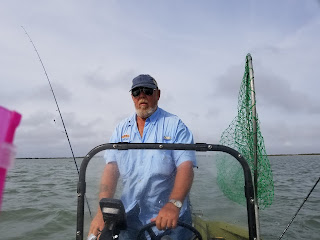 I tried fishing two poles, one my usual slip bobber rig and the other a Carolina rig, (a slip sinker rig the same as used for walleye). However, the strong wind was blowing in one direction and the tide in another so all I ended up doing was getting both rigs crossed in the worst tangle I have had in quite a while.
Meanwhile Dave was adding to the fish on his stringer and they were bigger than my just legal black drum. Laying one pole aside and using the Carolina rig, I cast close to the oyster reef in really shallow water. Immediately I had a bite and missed it but on the next cast I hooked a nice keeper black drum. Another cast resulted in a missed fish and then I caught three redfish in a row. The last one was a twenty-two-inch fish and it was my first legal red of the year!
Earlier that morning, Dave had knocked on my door and asked if I wanted to go fishing. Even though there was a dense fog advisory, I said yes as I knew he would be cautious. After hooking up to his boat, we bought some live shrimp and discussed the options. Either we could launch by the bridge and fish the shoreline or we could go to the state park and try the old pier. 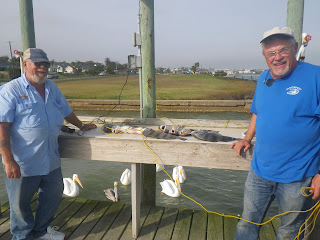 Either choice would let us stay in sight of land and so we first headed to Goose Island State Park, (Dave also has a good gps chart and fish finder). The good news was that the public fishing pier was being repaired, but the bad news was that the heavy equipment was pounding supports into place and the fish had disappeared. Still I managed to catch a legal black drum.

After an hour without any more bites, the fog lifted, and we were able to make a long run to one of Dave’s favorite spots. It’s a big oyster reef that sometimes holds fish and several years ago we had caught a nice limit of big legal-size black drum, (the black drum must be between fourteen and twenty-eight inches to keep). After anchoring the boat several times, we finally figured out where we could fish without being blown onto the reef.
He had made another wise decision and we spent the rest of the day adding to the stringer until we had our limit of ten black drum and on redfish. Now it was time to head back, show off the fish and clean them. 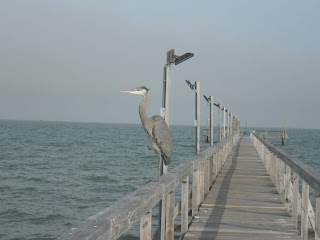 Black drum are ne of my favorite fish to eat and the white and brown pelicans swam below the cleaning station fighting for any scraps, (the white pelican will even swallow the whole carcass and will swim away with the tail sticking out of their big beaks!
A great blue heron and an egret stood by as gulls flew overhead. You have to watch the fillets carefully as gulls will swoop down and steal a fillet if they get a chance, while the others will walk over and steal one from your cooler.
It is always a good day, whether or not you catch fish and, on the way, back we were rewarded with the sight of a pair of whooper cranes on the Blackjack Peninsula. So, the question now was black drum in a lemon/caper cream sauce, or parmesan crusted  and lemon panko baked fillets?
Thanks Dave for the great day!

Back in Rockport, Texas for The Next Three Months 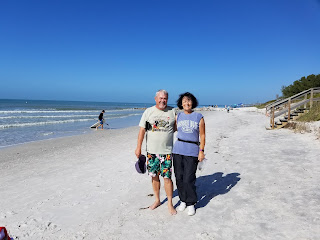 We left Treasure Island and stopped at Monticello, Florida to visit with our friends Bob and Sue.  It was a good thing we did as they are selling their house and moving to Tennessee. They decided that they needed to be closer to family members.
Sue fed us a great homemade soup with a custom crusty bread from the local market! Their friends Dave and were also there and after dinner we played a fun game called Wizard. It was a fun and simple game with lots of chances to set your opponents, so the lead changed right up until the end! 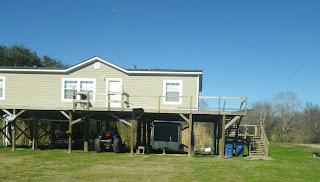 From Florida we made a long drive to Grand Isle, Louisiana. The drive was through heavy rain and high winds and we were glad we had the car instead of a high-profile truck. As usual Connie and Gary welcomed us with a dinner of gumbo, Cajun Style of course. Gary did model his new garb, a Christmas present from his son Blaine. 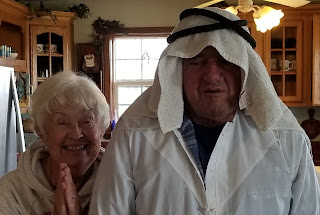 The weather and wind abated for a day and Gary took me out in his boat. We tried several different places before he caught the first fish, a nice sheepshead. 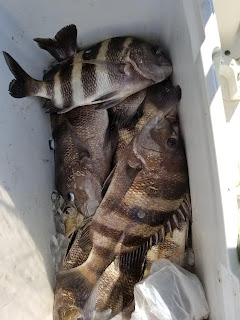 Gary then proceeded to show me how it was done and he caught six more, before I finally caught a couple myself, (Gary is quite a good fisherman and he usually out fishes me, so it wasn’t any surprise). 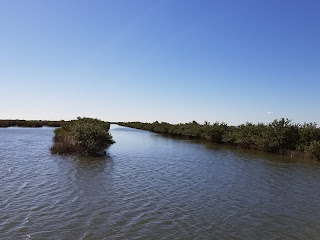 Leaving Grand Isle, we decided to drive along the coast and take the Ferry at Cameron, Louisiana. The drive was slow, and it took longer than if we had taken Interstate Ten, but at least we avoided all the heavy traffic. 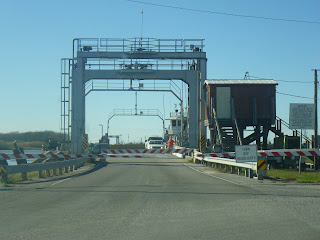 It was a two-ferry ride day as we crossed the Bolivar Peninsula and spent the night in Galveston. The next morning, we drove to our winter spot in Rockport, Texas and it was so nice to be warmly greeted by our friends.

Now it was time to concentrate on finishing our jewelry for our first show in February.

Dave, different then the Florida Dave), invited me to go fish the Jetty in Port Aransas. 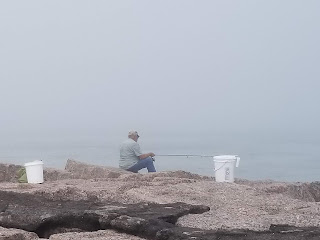 Terry and his sister-in-law Marlene joined us. 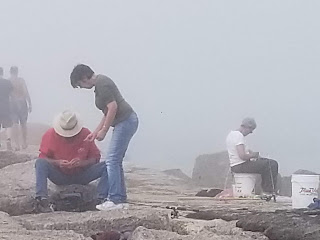 The fog was so thick that we couldn’t see the ships passing before us and we all jumped when they blared their fog horns!

We all caught quite a few fish and ended up keeping four sheepsheads. We also caught trigger fish, but they were too small and so all were safely released. If you don’t use circle hooks you should give them try!
Clear skies

The Rescue of the Lady Dulcina, Grand Isle, Louisianna 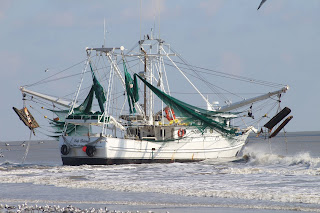 It was a long drive from Florida and the difficulty of the drive was compounded by the heavy rain and wind. Our new car shrugged it all off, even when we had to drive through a deep flooded pond that formed in a parking lot. 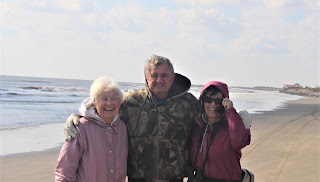 Arriving at Grand Isle we were warmly greeted by Connie and Gary who told us of the beached shrimp boat, the Lady Dulcina. It had run aground in the high winds and waves and needed rescue. It had tried to free itself to no avail and the word was that the Master Devin, a larger two screw shrimp boat, was coming to the rescue. 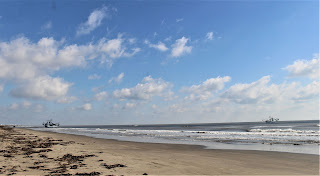 So, the next day we drove to a beach access point from which we walked to a point near to the stranded shrimper. A two-motor fishing boat attempted to tow the Lady Dulcina, from Golden Meadows, but even with the moving screws of the shrimper the boat remained stuck. 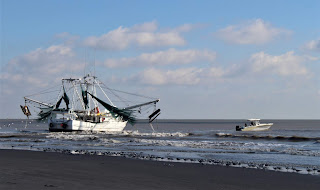 Next a larger boat, the Master Hayden secured a line run out to it by the runabout, but it simply kept the line tight until the Master Devin, a two-screw ship, transferred the line to its stern. 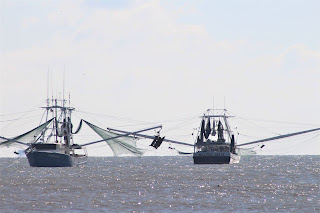 The Master Devin next motored as near as it could get before securing a stronger line passed from the motorboat, before drawing the line tight and starting the rescue. 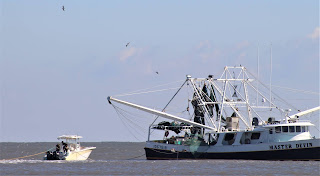 Back and forth the larger boat rocked the Lady Dulcina before the small shrimper finally begin to move. The movement was extremely slow, and we all wondered at the strength of the line. The Lady Dulciana finally cleared the shore and promptly ran aground on the second sand bar. 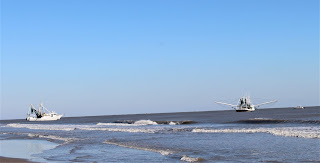 However expertly continuing the job, the Master Devin successfully cleared the small shrimper! It was later reported that the Lady Dulcina had damage to its steering and was putting in for repairs while the Master Devin started to shrimp along the beach. 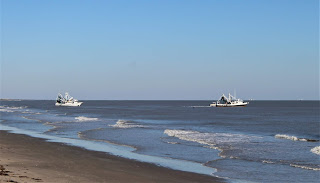 Ps all images and text are my property and are copywrite by me. Any use without my permission is illegal