A Trip Up the Grays, Looking for Morels 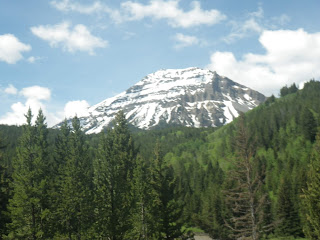 Last week we decided to take a trip up the Greys River, again in search of the mythical morel mushroom. This time we were going to travel to the Martin Creek Fire, which is located only seventeen miles away, (as the crow flies and so the one-way trip of sixty five miles took almost two hours).
However here is a mountain range in the way, the Salt Range, and we had to drive north to Alpine and then turn up the Greys river road for about forty-five addition miles of good and not so good gravel. At first the gravel road was good but after a while it bean to narrow. 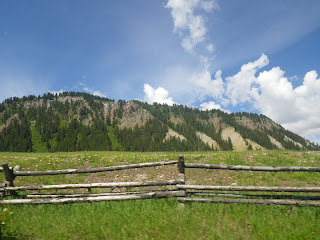 The road became rough and at one point a busy beaver had constructed a new dam causing a channel of the river to partially flood the road. It was a narrow channel and the base gravel looked good, so I put the truck into four-wheel drive and drove through the submerged road.

Before you think that is crazy, or stupid, there were two other sets of fresh tires tracks on the other side. It wasn't any problem getting through and so we continued up to the burned area. No one was there so we parked the truck and hiked through two different areas of burned trees.  The end result, was that we didn’t find any morel mushroom.

There were no people tracks, so it hadn’t been walked, and we didn’t find any evidence of cut stems, which show up quite nicely in a burn area. It seemed to us that with the abnormally cold weather. It was still too early.

It was all needless concern as the river hadn’t risen, and we easily forded the flooded road before finding a nice spot for a picnic. After our picnic lunch, we headed back home. We did spot several deer and at one point a doe with two fawns crossed the road before us.
It had turned out to be a nice day, and what more could one ask for than to spend a day in the mountains together, after all there is a blessing in every day, (we later learned that a few people were finding some little grey morels). Clear skies 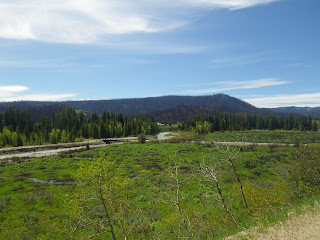 We have been crazy busy. Besides getting ready for our summer shows, (three shows in the next four weeks), we also must take time to go hunting for morels. This year there are two fire areas near us the Martin Creek Fire along the Grey's River and the Roosevelt fire along the Upper Hoback. 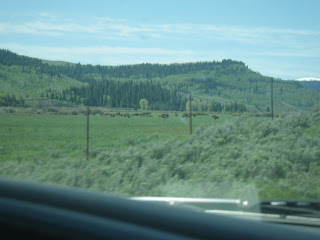 The weather has finally warmed up and we decided to hunt the Roosevelt fire area. Now the fire is only forty miles away, but the problem is that there are two mountain ranges in the way. To get there we had to first drive to Alpine, then up the Snake River Canyon to Hoback Junction, and finally along the Hoback River to Bondurant before turning up a forest service road along the Upper Hoback.
Its always a pretty drive here and this one was no exception. The rivers are all high and muddy, so we are not missing any fishing and Renita snapped images as we drove. Turning up the Upper Hoback Road, we passed ranches that were definitely on the high end. 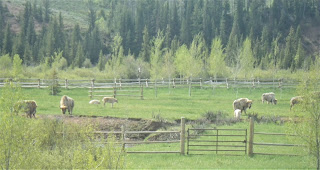 One ranch had a large herd of buffalo and a little further up we spotted what looked like white cows, before we finally realized they were a small herd of white buffalo. 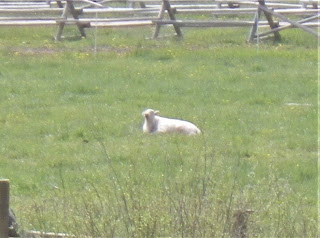 They had been kept separate and the older cow’s white fur had discolored from the long winter, but the calves were a very bright white. It’s a good thing that the cows protect their young as any grizzly bear wouldn’t have any problem spotting them in the green fields, (my sister Connie wrote me that white buffalo had special meanings in Indian lore and if so, this concentration must  be really bad omen). 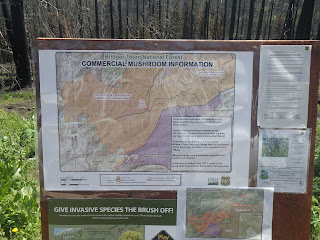 After stopping for pictures, we drove further up the road until we reached the start of the burn area. Posted signs told us we in the commercial morel hunting area, (we are allowed to collect three gallons a day, while the commercial hunters must buy a three-hundred-dollar permit form the forest service and don’t have limits). 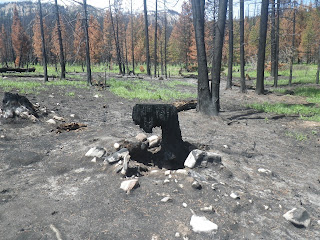 A vehicle was pared alongside the road and we drove a bit further before starting our own hunt. There were places where the fire had crowned out, (the hottest fires), but also places where the fire had burned the ground cover sometimes killing the trees.
We hunted four different areas and got in some good exercise, but we didn’t find any morels. (Renita spotted an interesting track, which might have been left by a bear but it was pretty degraded). 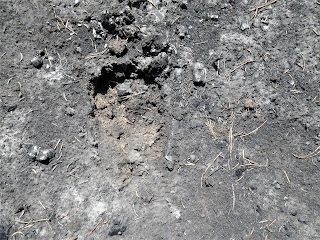 Talking with another mushroom hunter he told us that the little grey ones had been found but we didn’t see any places where they had been harvested. He also suggested that the ground needed to warn up a bit before they emerged. 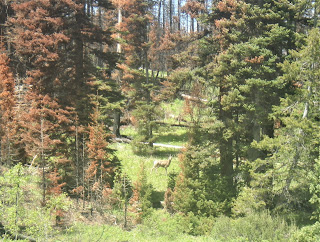 Still it was a great day to be out wandering around in the forest and we did see several deer browsing the new forest floor growth. Fires are an important process in the health of a forest and several successions will take place before the pines reclaim the burned area, (the new grass spurs an increase in elk and deer herds). 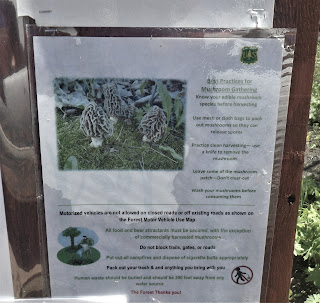 Today we are heading out to look in the Martin Creek fire area. Its only twenty miles away but it will entail an almost two-hour drive. If you have ever eaten morel mushrooms you understand our passion.
Clear skies 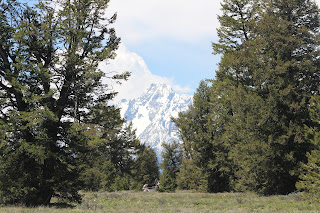 Most people who travel to the park never do see a bear. The best times here are in May and September. Those times are predictable as in May the female bears are alongside the roads with their cubs while in September, the bears are in the berry patches.
So, when our friends invited us to go with them, we packed our picnic lunch, binoculars, bear spray, and cameras. They offered to drive their car and soon we were off looking for local wildlife. After stopping in Jackson for a sticky bun, we got caught in a road construction traffic jam, just after entering the park. 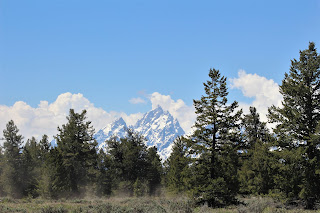 Finally getting flagged through we passed buffalo and Antelope before reaching Moran Junction and driving up Towgotee Pass. We missed the cattle drive, whew, and made our first stop just past the bear warning traffic sign.  No bears were visible at either of the usual spots and so we continued up to the pass.
From there we turned around and headed back down looking but not seeing anything unusual, so we turned into the park at Moran Junction. Our next stop was at Pilgrim Creek and the road was open! 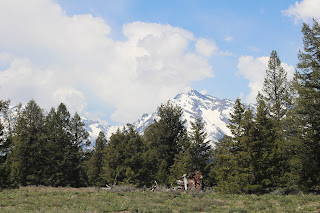 Slowly driving up the road to its end we didn’t spot any bears. The two female grizzlies, bears 399 and 793 have both sent their cubs off to fend for themselves and there have been reports of lewd and lascivious behavior with a male grizzly bear named Brutus.

The only sight that greeted us were the stunning views of the Tetons as we drove though sagebrush flats interspersed with lodge pole and ponderosa pines. There were also aspens, cotton woods and the occasional Englemann spruce, (a straight tree with a sharp pointed spire like crown). 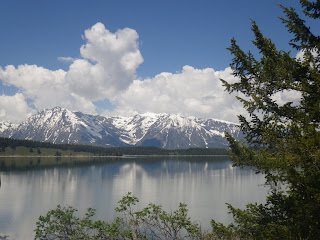 Turning south we passed Willow Flats and we did spot some elk on the edges of the willow trees. They should have calved by now, but the calves are hiding from the bears by staying still and hidden. The calf elk are scentless and spotted so a bear must almost step on one to find it.
As it was lunch time, we drove to our favorite picnic area where the tables were all taken. Continuing past the flats we stopped at another picnic area that overlooked Jackson Lake. As we ate, we watched for rising fish and I mused on the stability of the dam. The dam itself is built as a floating dam sitting on six hundred feet of loose sediment.
A study was done that recommended that the dam should not be built in its current location. However, the politics demanded that the water should be stored for future use by the potato farmers in Idaho. The best site for the dam would have flooded and blocked the elk migration route from Yellowstone thank God a non starter, (One dam, just over the other side of the mountains failed shortly after being built, look up the Teton Dam Disaster).

As we left, we spotted a flower which we think is named purple fringe. Renita and I are not very good botanists, even though we have both taken wildflower identification classes, (we had great instructors but we are not smart enough and so we usually only identify rocks). 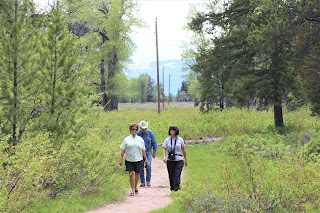 After lunch we hoped to drive the Moose-Wilson road. The road was close, but we did get far enough to a place where we often take a short hike. As there are bears in the area, I took my bear spray along, it doesn’t do any good left in the vehicle. We didn’t see any bears or moose, just other birders. There were reports of great gray owls, nesting in the area, but we never found the nest or spotted the owls. 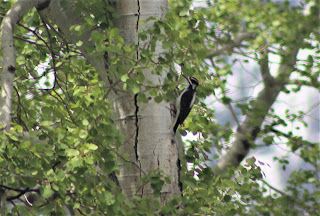 A hoary woodpecker entertained us, along with a buffalo head duck, a rufous crowned sparrow, and several yellow warblers. On the way back to the car, Renita spotted several elk on a ridge. Besides the cow elk she also spotted a huge bull elk. The elk have started to grow their new antlers and this one will be a monster bull come this fall. 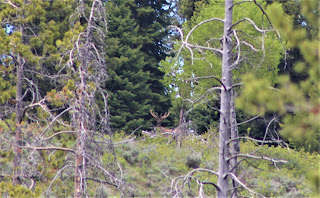 As we hiked, we disturbed a sandhill crane that flew off with several loud croaking call, but that doesn’t really describe the sound. As you would expect its call is extremely loud!

The drive home was uneventful, after we got caught in a buffalo traffic jam, (it always funny to watch the tourists get out of their cars to take closeups), and we finished the drive in the rain. Another nice day in the park! Clear skies.