Kayaking, Black Drum, and A Great Day on the Water 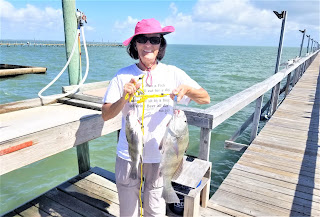 On Sunday we went for a drive. Our goal was to do a little birding and to check out the fishing at some of our places we kayak. The whoopers are not here yet, but we did see quite a few cattle egrets and some really light pink roseate spoonbills. At one place two people were wade fishing and they were catching black drum! As black drum are one of our favorite fish to eat, we hurried back home and worked on the kayaks and poles. It took the rest of the day, but we finally went to bed and of course could not sleep.

Getting up early I putzed around knowing it was not wise to wake Renita before she was ready. I drove to our favorite shrimp store only to be told that the store had no shrimp and was closing. Instead I bought a quart of live shrimp and the shrimp were so big that we had to cut them up to get them onto the hook. 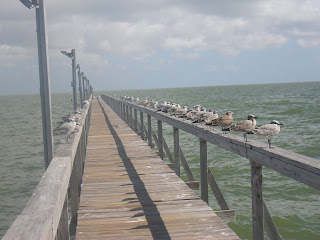 The day before there were not any kayakers but when we arrived there were seven kayaks already out! Additionally, there were two wade fishermen so when we finally pushed off from the bank many of our spots were taken. Still we found a nice spot and anchoring we fished some newly made oyster reefs.

We did have a few bites but the fish were really small and so we decided to move closer to shore. I had caught a small black drum and a hardhead, (terrible eating), when Renita set the hook on a nice fish! It was almost comically as we did everything wrong, but we were still able to net the fish. I It was twenty-two-inch black drum, a perfect size for our dinner. 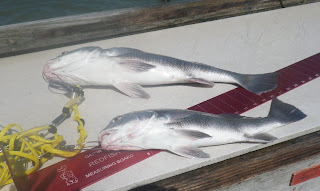 Casting back out she had another bite, but the fish came off. I cast on the other side of the structure she was fishing, and I was rewarded with a nice seventeen-inch black drum. We spent the rest of the day there and caught speckled trout, sand trout, and Renita had a large fish that swam around some posts before snagging up and getting away.

My big fish of the day was a stingray and several more hardhead catfish. It did not matter as we ran out of bait and headed back to the car. Now the decision of the day was how to cook the black drum. We ended up sautéing them and then we covered them with a lemon crème and caper sauce. They were excellent!  Clear skies 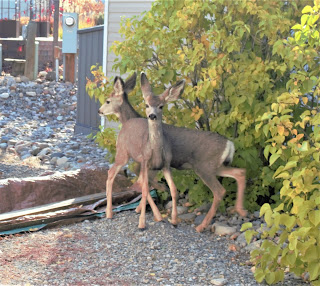 One of the signs of fall is when the deer invade our yard. They are looking for the tasty bushes we have planted and cultivated and are really unconcerned by our presence. Each year we leave when the weather turns cold and so we winterize our fifth wheel before heading out.

The first day we drove to Cheyenne, Wyoming which is a long drive. The reason we drove so far was to beat the high winds that were forecast for the next day. The forecast was that the winds would exceed eighty mile per hour.

Getting up early we dove to Lamar Colorado and checked into a motel. Its was good we pulled off the road early as the front arrived and a dust stormed slammed into the town. Visibility plummeted to about one hundred yards and semis disappeared. They never slowed down. 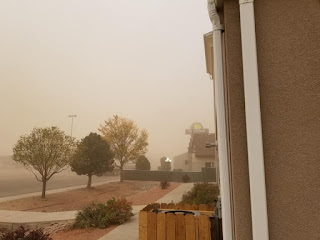 The next day we traveled to Lubbock, Texas. Each night we stayed at a motel and we got out our cleaning and sterilizing wipes to carefully disinfect all of the surfaces. Again, we got up early and drove to Boerne, Texas which is just north of San Antonio. We took a rock on the drive and shattered our windshield so for Christmas we are going to get a new one! 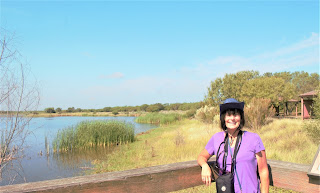 As we were only two hundred and fifty miles from our winter spot in Fulton Texas, we actually planned for a picnic at one of our favorite birding spots, Choke Canyon State Park. Entering the park, we spotted a green jay but were not able to get an image. 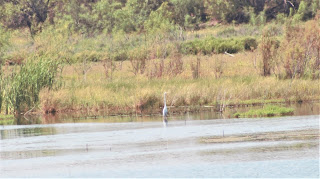 We drove to the eighty-acre pond got out our binoculars and cameras. Walking out to several birding points we saw the usual birds. A white ibis stood on a log and coots and swamp hens paddled around oblivious to our intrusion. The water was extremely low and areas that were usually flooded were high and dry. 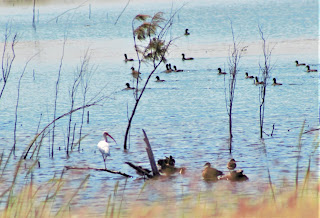 We did not spot any alligators and had to be contented with a great egret, a great blue heron, and some drab ducks in their dull fall plumage, (gadwalls perhaps?). Driving through the campground was not any better but as we got near the parks exit, we saw a male and female scissortail flycatcher. 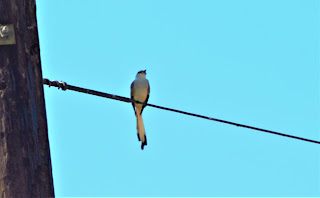 They were on a power line in about the same exact spot we had seen our first one twelve years ago. 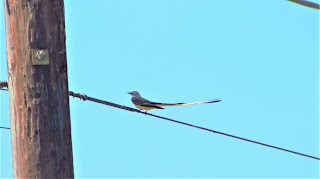 The flycatchers made our day and so we drove the rest of the way to find our fifth wheel parked and waiting. We were home at last!  Clear skies
Posted by Doing It On the Road(Part II) at 4:07 AM 1 comment:

A Last Trip to the Tetons for 2020, Hiking the Bradley Trail 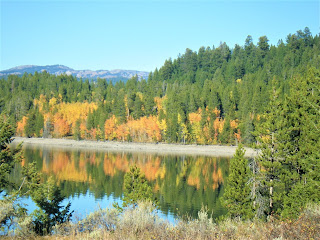 The smoke here has been really bad but finally the wind shifted and cleared things out. It was time to head to the Tetons for a hike with our neighbors and friends, Fred and Becky, and hopefully a close encounter with a bear.

The aspens had finally turned and so it was a colorful drive to Grand Teton National Park. We took the Moose Wilson road as it has the best potential for bear spotting due to all the hackthorne berry trees. 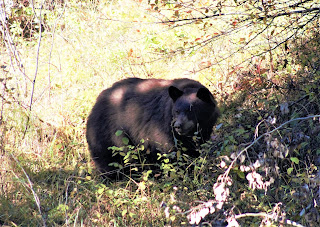 We entered the park and drove past the potholed gravel stretch of road before things finally smoothed out. We did not get far before we spotted stopped cars and a park bear volunteer waving us past. Luckily, we were able to get parking spots, (Fred and Becky drove their own car due to covid), and we did not have to walk far to get back to the bear. 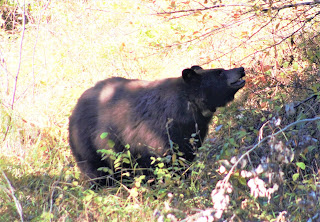 It was close to the road and there were actually two bears, although you could not see either one. All you could see were bushes shaking and the occasional sound of branches breaking as the bears pulled the trees down to eat the berries, (the hackthorne has long thorns but the bears did not seem to mind). 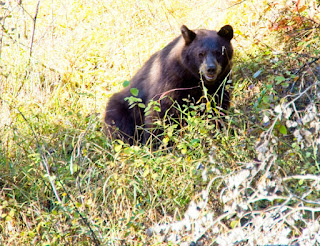 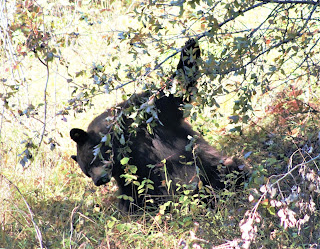 He did not seem bothered by us as he continued to feed. The park volunteer said the bear would feed for a bit and then cross the road to a pond where he would drink before returning to the berry feast. 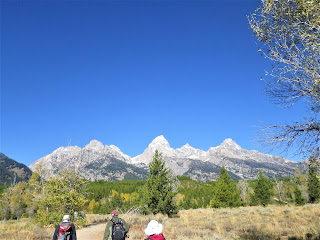 We had a good hike ahead of us and so we left heading to the Taggert Bradley Trailhead. Our plan was to hike to Bradley, a new hike for us, and maybe return to Taggert. It would have been a hike of about six miles. 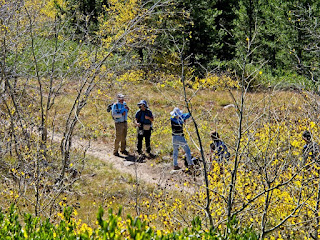 The trail is steeper than the one we hiked in Glacier National Park and started at over six thousand feet in elevation. It was not too bad we started to climb but the trail got steeper and Renita dn I stopped to measure our heart rates.

We let our heart rates tell us when to stop and so Fred and Becky got ahead of us. They stopped for us to catch up and so the hike became a lot longer than we had planned. It took us over two hours until we finally sighted Bradley lake through the trees. 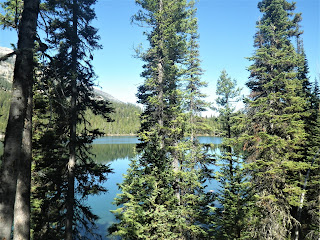 After lunch we took the obligatory pictures before we head back down the trail. Deciding to head directly back we skipped Taggert Lake and arrived back at the cars in a little over an hour. Our friends had to leave, their dog was waiting at home, but we decided to drive to Pilgrim Creek in search of more bears. 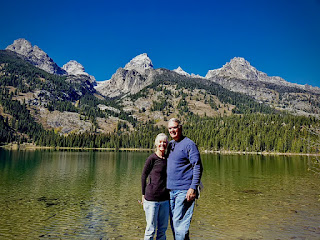 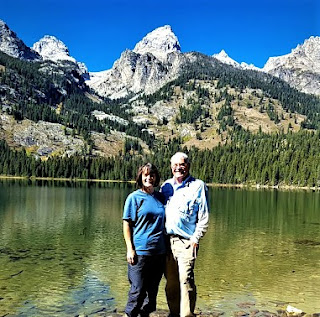 We never did spot any more bears, but we did get to enjoy the sight of colorful trees reflecting on the surface of Jackson Lake. It had been a good hike and my ankles had survived without any problems, (going downhill is tricky for me as I sometimes roll my ankle. I did wear my good high top hiking boots and used a hiking staff which also helped.
Posted by Doing It On the Road(Part II) at 8:46 AM 1 comment: