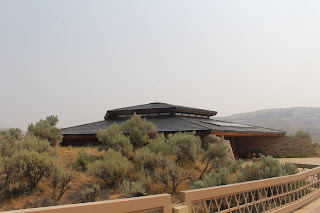 While working the Cody Show we received an extremely disturbing call. Our friend Val told us that her husband George had passed unexpected. He did not die from covid, but instead from a common disease. When we returned, we learned the sad details.

We met George and Val in Texas and later traveled to their ranch in Colorado. They were the best fly fisherpersons we have ever watched, and they taught us so much about fly fishing for trout that the information dramatically improved our catch, (We release all of the native fish).

Val sold her place here in Star Valley and as she and her daughter in law moved her rv back to the ranch we followed them to help with any unforeseen problems, (everything went well). The route took us past Fossil Butte National Monument, and we decided that when we returned to Star Valley we would stop and see if there were any new exhibits. 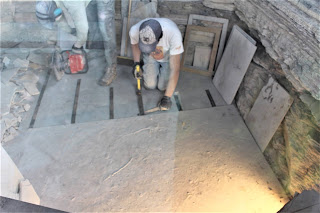 On arriving at the monument at first things looked the same, but a new outside exhibit showed how fossil collectors removed slabs containing fish fossils before preparing them in the lab, (if you look closely, you can see the backbones that tell of a fish covered in sediment). 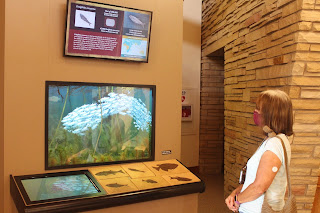 Entering the museum, it was obvious that there had been lots of changes, (besides having to wear masks). The first thing we noticed was a new hologram display that showed how the different fish swam. 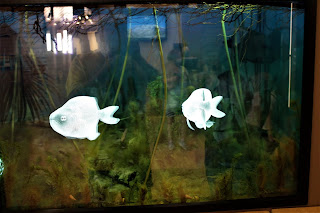 By pushing a button of a fish fossil, the fish would appear as a hologram and another display would tell of the number of each of that species type found each year. 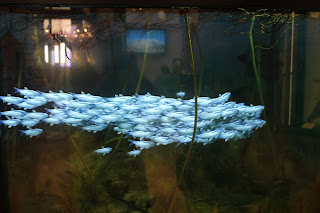 Where before a large display had contained huge fossils of fossil palms, it had been expanded and contained many of the other plant fossils found in the lake and along the shoreline. 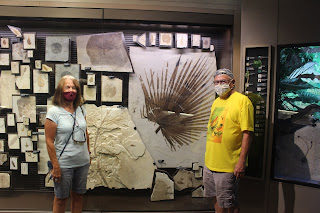 Fifty-two million years ago, the climate had been warmer, similar to the climate along today’s Gulf Coast, (don’t forget that our continent drifts each year). 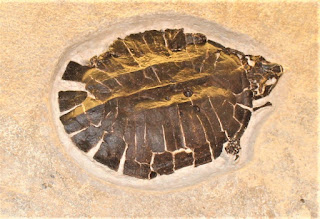 Turtles were common along with caimans and some of the turtle fossils showed holes where the reptiles had tried to eat them, (look carefully at the picture, and you can see the puncture holes). 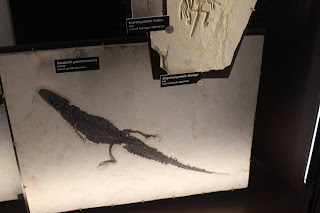 Fossil mammals were also displayed along with fossil bats and birds that were similar to what we see today. 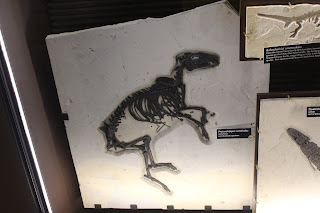 As with all the museums we visit we made a donation, and also bought tee shirts. 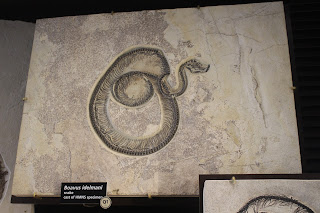 It had been a nice diversion on the way home and apropos to our friend’s memory. Arriving home, we have since been hit with several days of heavy and much needed rain.

We do hope to take a trip involving camping, fossil collecting, and fly fishing. We had hoped to make this trip with our friends, but they will be in our minds and hearts. Clear skies 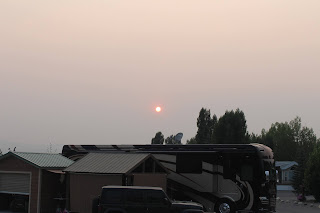 It’s been a while since I have written, mostly because we haven’t spent much time outside. The reason, of course, is that the forest fire smoke has made the air quality so bad that its not safe to be outside or exercise. There was a brief respite last week and so Renita and I were able to do our walks, watch the Perseid meteor shower, and even take a drive to Grand Teton National Park.

The Perseid Meteor shower put on its yearly display, and I did go out to do a meteor count early on August.  12th. I could see all the stars of Ursa Minor and even the Milky Way, so the seeing conditions were near perfect. From 4:10 to 4:27 am I saw nine Perseid meteors and six non Perseids. Doing a little math gave me a count of thirty-two meteors per hour. Not bad but nowhere near the peak. 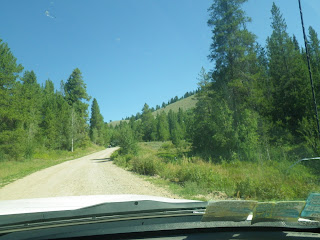 We have always wanted to take the Fall Creek Road to Wilson. It doesn’t save any time, (a little maybe because of all the road construction), but we had read in the paper that bears were spotted south of Wilson which is where the Falls Creek Road is located.

The first six miles of the road were rough. The best way to describe it as a washboard surface that pounded our truck as we slowly drove upstream alongside Falls Creek. Occasionally a rock stood up and was too be avoided as it could damage a tire or an oil pan on a low riding car, (we were in our truck). 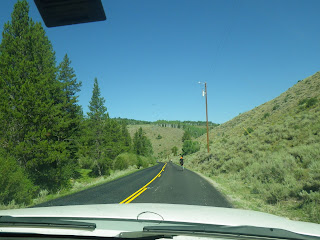 Six miles in everything changed as the county had just finished paving the next eleven miles! It’s a series of curves, one after another and the drive is slow due to the many turns. The road was also filled with people on bikes enjoying the smooth surface and easy ride.

Finishing in Wilson, our next goal was to go into the park and check the berry situation. The bears have had a tough go of it due to the extended drought but after entering Grand Teton National Park, we spotted hack thorn trees filled with berries. 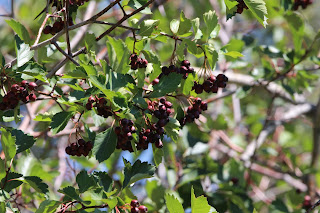 Spotting a moose, we stopped and watched as it fed in a pond, before we walked along a trail past a bear warning sign. 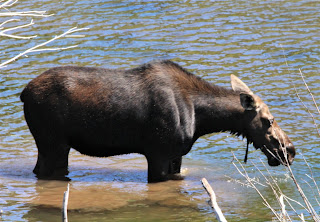 There were quite a few walkers and so we felt safe. One person told us that a back bear had been feeding on the berries, but we never saw any bear sign. Renita, (my fearless pioneer woman), is really good at spotting tracks and scat, while I am constantly looking for live animals. She also listens for breaking branches and has alerted us on past hikes to a nearby bear. (My hearing aids are not as good as her ears). We spotted several pine siskins eating the berries and one posed for a picture. 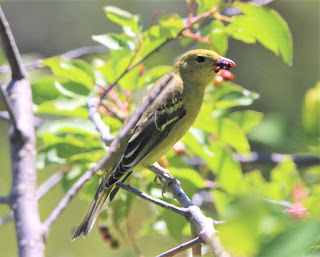 Driving to the Jackson dam we drove by Willow Flats but didn’t see any sign of elk or bear. Turning north we next drove to Colter Bay to check out the lake’s water level. Colter Bay has been closed and all the moored boats had been removed. The lake is at an historic low. 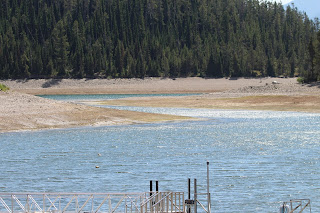 As we glassed the dry bay a person next to us shouted, “look at the fox”, and turning we saw it casually trot past us before it begin to hunt for any careless ground squirrel. Finding a good vantage point, we saw that the fox had been collared. A radio collar on a fox means the fox has been fed by people! 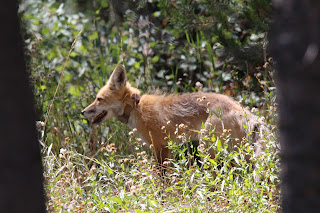 Once it has been captured and fitted with a radio collar it is moved to a new location. If the fox returns and is fed again, it is recaptured and euthanized. While this may seem harsh it is a safety step to protect the visitors to the park. The rule is simple, a fed fox or bear is a dead fox or bear. They lose their fear of people, (a book I highly recommend is, Death in Yellowstone Park. In one case a woman was feeding a bear candy. Getting bored she said to the bear, “That is enough”, and turned her back and tried to return to her car, which was big mistake as bears don’t speak English).

From Colter Bay we drove out the entrance at Moran Junction and headed back home. It had been a good day of clear skies and we got a check mark form our Fitbit. That night the smoke moved back in from the California, Oregon, and Utah fires and new air quality warning have been reissued.

It’s supposed to get cold here, so we are hoping for rain to dampen the fires. So instead of saying clear skies, let it pour! 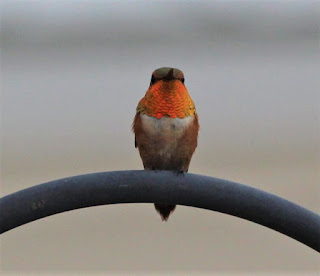 The last two weeks have been filled with lots of indoor and outdoor activities. Mostly indoors as the smoke from the western fires has reduced the air quality so much that we need to stay indoors. Still recent rains have helped, at least temporarily, and so we have resumed our walking, worked on stones, and even got to teach two friends a beginners fly fishing technique. 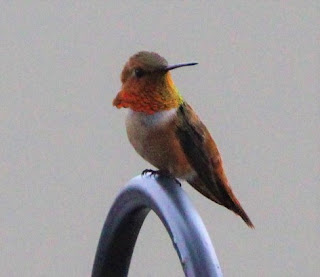 The hummingbirds have been so enjoyable as we watch them feed and fight over the feeder. In fact, the fighting has been so intense that we bought two more feeders and spread them out. This made it harder for the dominant rufous male to keep the other hummers away. Now we have three males that each try to stake out and claim a feeder. 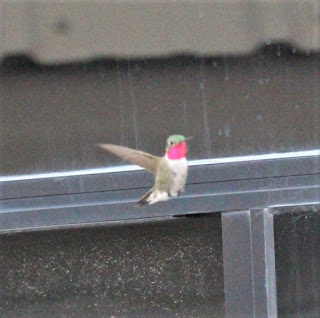 It doesn’t seem to be effective for them as they chase away others only to have other hummers sneak in for a drink. This has caused us to buy more sugar, in fact we have used more sugar this year then we have in quite a while! 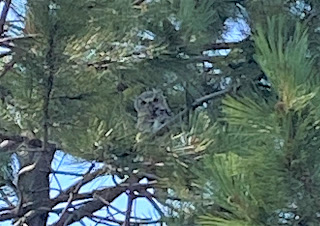 Yesterday, while we took a walk around the park, a large owl flew above us and landed in a tall ponderosa pine. Trying to take images with a cell phone was less then satisfactory so we walked back home, got our good camera, and returned to the tree. 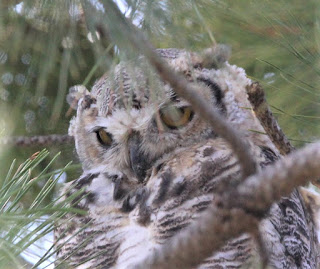 Surprisingly the owl was still there. While waiting for it to face us a couple walked over, and the lady said she could talk to it. She quietly hooted several times and it turned to look at us! We have never heard of an owl whisperer before, but we now have one in our park! 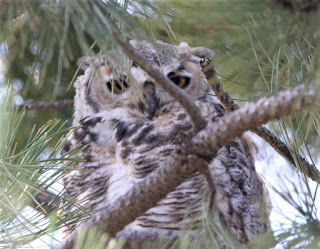 When we first saw the owl flying, we thought it was a Great Gray. There are rare but do inhabit the area. Once we got a good look at it, we saw the ears and realized it was a horned owl. It’s a beautiful bird but common here as it is across North America.

Our friends Fred and Becky had expressed interest in learning how to fly fish. On another day of smoke free air, we took them to one of our favorite streams and taught them how to make a roll cast. It’s a simple technique that catches fish and works quite well when the banks are lined with willow trees. 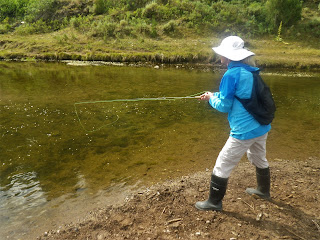 Becky quickly picked us the technique, she had stream fished in Colorado, but Fred struggled at first. He commented several times that he wished he had his Zebco reel. We never did spot or catch any trout as the steam was really low, but we did have several hits from mountain whitefish. They thanked us for the lesson, hopefully next year’s fishing will be better! 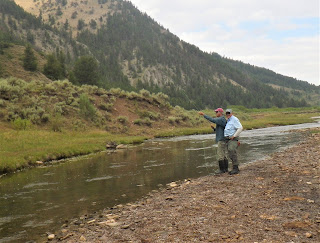 Our shows are over for the year and now it is time to replace those we have sold and to work new stone. One of the new stones is Yellowstone Variscite. It’s mined from a claim on the east flank of the mountains. Just outside of the park. We hope to work some today and look forward to getting on the grinding wheels, (we make most of our cabochons using a Genie Cabochon Maker).

Once we have the stones finished, we will turn them into jewelry while we are in Texas! Clear skies