From Star Valley to South Texas

We left Star Valley in early October and headed south to our friend, Val’s ranch. It is a hay ranch, but this year’s drought was so bad that she only got twenty-three bales, (she normally gets four hundred). This of course presents a huge problem, as she has two rescue donkeys, two rescue horses, her horse and deer. 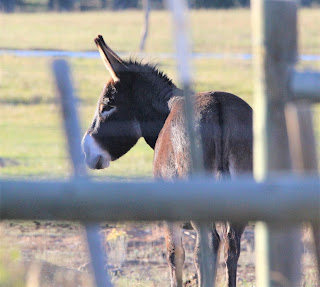 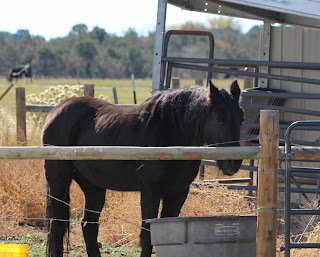 She also has many bird feeders which bring in flocks of doves, scrub jays, and red wing blackbirds. The scrub jays land and empty her feeder onto the ground which brings in wild turkeys, and others. She even has a skunk that comes in but luckily, we never saw it, (did I mention she loses cats to an annoying mountain lion)? 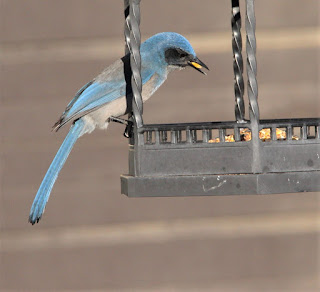 You never know what you are going to see, and when you walk around after dark you want to take along a bright flashlight! 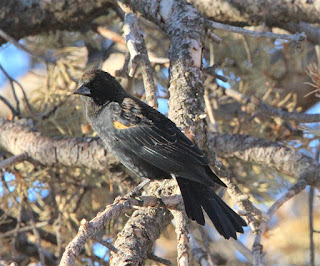 From Val’s, we headed further south and west and went to Surprise, Arizona. We stayed there for two hours, which was long enough for us to select and order a park model for our place in Wyoming, (The manufacturer is so far behind that out delivery date is in the spring of 2023). Jumping back in the car we next headed to Tucson, across New Mexico and into Texas. As we crossed the Hopi and Navaho Reservations, we did see Monument Valley in the distance and were lucky enough to get involved with a snowstorm, (we bought snow tires this year, so it was not a problem).

We ended up driving over twenty-three hundred miles in five days, which is way too much for us. Hopefully never again. Clear skies 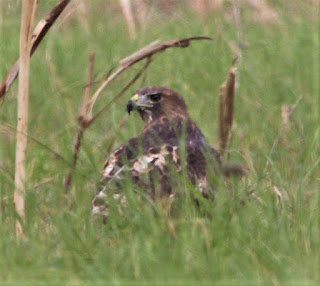 So now we are in south Texas where the temperature is in the upper eighties with a high humidity. I miss the mountains already. We went birding to Lamar and did spot a red tailed hawk hiding it's kill. Clear skies
Posted by Doing It On the Road(Part II) at 4:51 AM 1 comment: 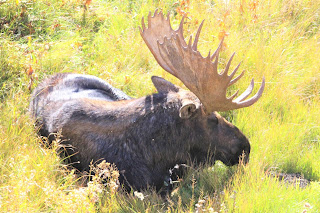 It’s about time for us to head south, but before we do, we decided to take another trip to Grand Teton National Park. The hope was that we would see some more wildlife than when we had a few days before. ( we only saw a squirrel, one elk, and the usual cow moose). 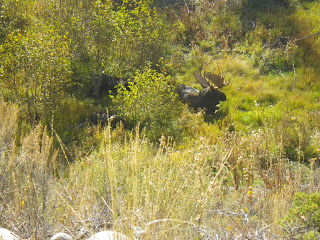 Our friends Fred and Becky also wanted to take a last look before they headed to their home in Texas, and they followed us in their truck. We took two vehicles as they had to head back before we did. Turning off at Moose Junction we drove past the headquarters and then took the Moose Wilson Road. 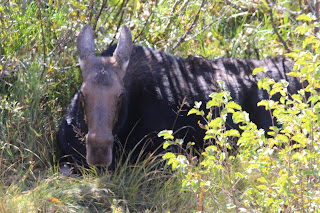 Cresting the first hill, we saw a huge crowd, but we were able to find a parking spot and grabbing our cameras, quickly headed to the pond, (Fred and Becky are in this picture). 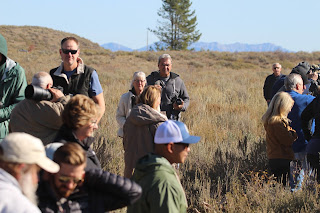 As we neared the edge of the steep cliff I couldn’t find the moose in the water, because they were resting right at the bottom of the hill, right below me! 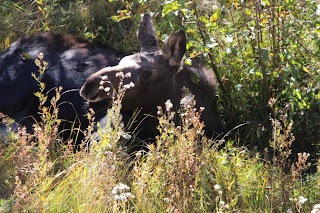 There were three moose, a cow and her calf, and a huge bull. Its rutting season and he had been attracted by the cow moose. People referred the trio as a family, but the bull moose had recently showed up and there was no way to determining if he had sired the calf. 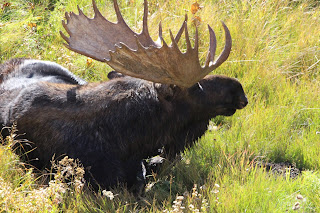 Didn’t matter anyway as he was a huge bull and by moving around, we were able to get some great shots. As we watched some people tried to get too close and a park person yelled at them to get back, (we later learned that early that morning the bull had charged a female photographer who had been within the twenty-five-yard safety margin required by the park. 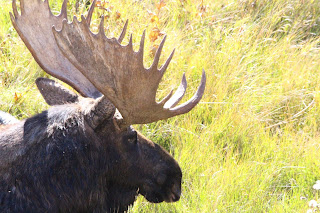 We took quite a few images before we left to drive to Pilgrim Creek. We didn’t see much and at Pilgrim and so we turned around and drove to the Oxbow. 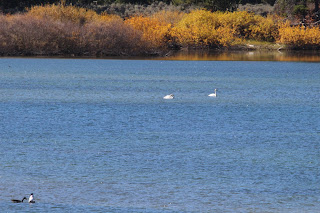 Two swans swam towards us, but they were still to far away for any great shots. We told Fred and Becky about the road to the Kayak Launch, and as they had never been there we decided it was a great spot to eat lunch. 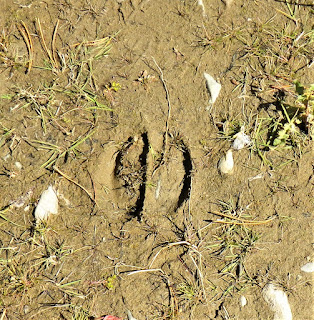 There were only a couple of other vehicles, and we grabbed our lunch and found a couple of nice-looking fallen tree trunks to sit down on as we ate. After lunch we hiked up the Snake River and spotted a whole flock of hooded mergansers splashing along the far shore. Trying to get closer Renita spotted fresh moose tracks and we headed further upriver to see if we could find any moose. 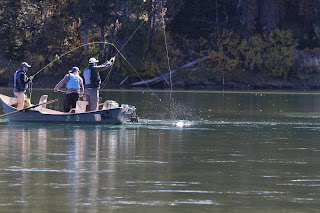 A guided boat went by and as we watched them fly fish, (they were using nymphs and strike indicators), they caught and released two fish. One was good sized, but they didn’t hold it up for us to see. Across the Snake we also watched as a flock of hooded mergansers chased each other and dove for fish. 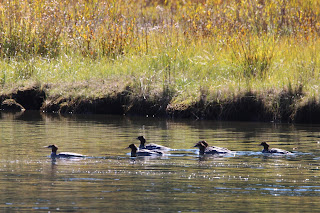 Continuing upriver Renita spotted more moose tracks and then a large black bear front paw print, (its as large as my hand). 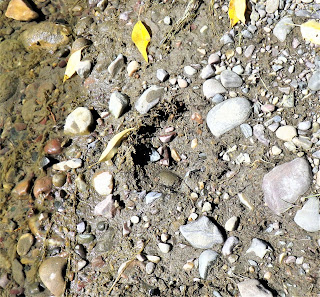 It was very fresh, and we realized we had left our bear spray in the car. Feeling stupid we decided to head back to the car!

Next, we drove across Willow Flats where I spotted an elk and then a coyote, 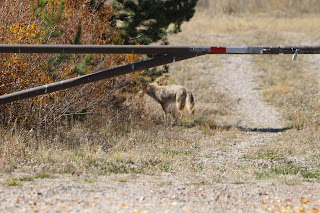 I didn’t get a shot of the elk and the coyote pictures were pretty poor, but at least we had spotted it. We then headed back to the Wilson Road and decided to take some more images of the bull moose. It was a great idea as they had moved to the south end of the pond. 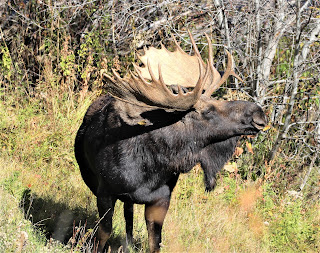 The bull emerged from the brush and paused to smell the female’s scent. You could see he stuck his tongue out to further test her scent and he moved quickly behind her. 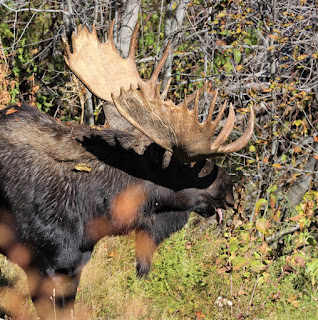 She did not want any more of his advances and she trotted to the water with her calf. 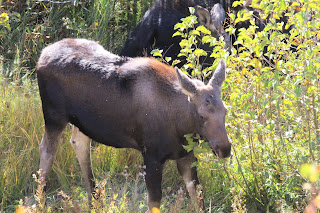 The calf, (pictured above), started nursing which means that she was not ready to breed yet and the bull turned his attention to all the people on top of the hill. 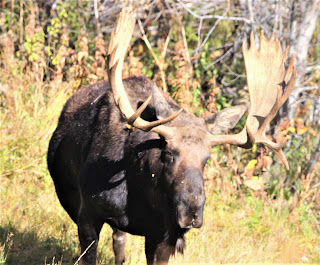 He climbed up to the halfway point and I thought he was going to charge the crowd, so I moved sideways to increase my distance. 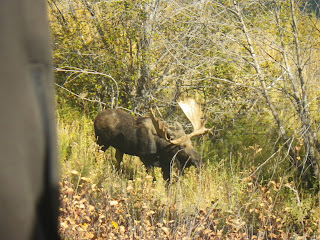 As I looked back at the crowd, I saw that Renita was taking more images, hmm, the pioneer woman sometimes tends to be fearless, (I had mentioned to her that we should move, but at least she had several photographers in front of her). 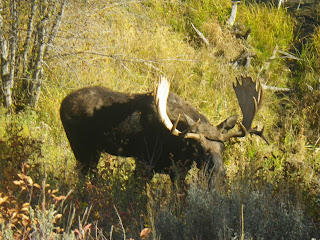 The bull stared at the crowd for a bit and then decided the cow needed his attention. 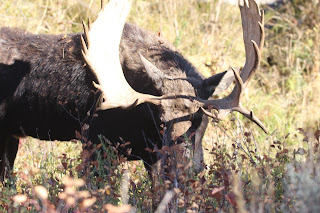 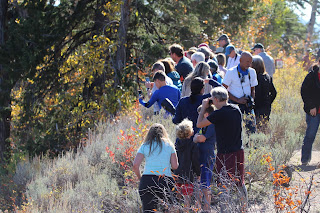 Most of the people were pretty good and shared good spots by letting others take turns, but there were some that tried to bully their way to the front. 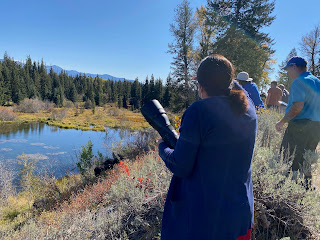 Someone said that they had seen a bear down the road and so we drove further south. At a place past the Lawrence Rockefeller Center, three park bear specialists motioned us past a brown bear in a tree. It was right on the road and as most bears do it ignored us as food was its main concern. We turned around only to find the bear had moved and was no longer visible. 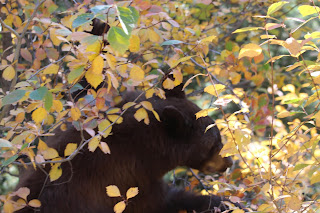 Making another u turn we discovered the bear had crossed the road and as we passed by, I was able to get six shots of the bear. One was actually a good shot and I got most of its face. Deciding it was time to get back home we turned south. The rest of the drive was uneventful.

Next year the road we were on will undergo a major reconstruction and so it will be closed for the season. So, we look forward to springtime when the grizzlies are near the roads. Grizzly 399 and her cub should make an appearance before she pushes them away. Its their third year and as subadults they will be on their own. Grizzlies bears should be everywhere!  Clear skies