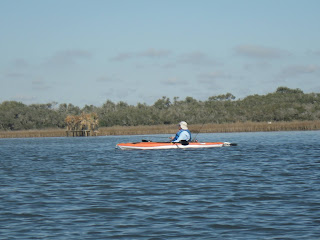 We are always filled with anticipation as we push off in our kayaks. Today was no exception as we were going to paddle to one of our favorite bays. It is a spot that in past years, has held fish after the passage of cold fronts and we have certainly had those!

It is a combination of fishing and birding as we sometimes see whooping cranes feeding in the shallow waters. Along the way a reddish egret posed along the shore and we passed several kayaks fishing close to shore. There were also several boats and all of them were casting lures into the shallow. 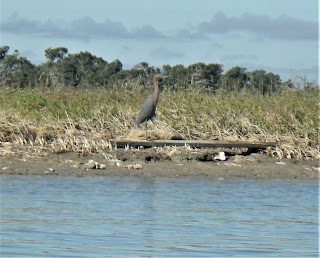 As we headed to our first place, one of the other kayaks saw us and reached the spot first.  Kayaking has changed a lot as many of the yaks are either powered by special electric motors, pedals, or even small gas engines, (we were the only ones using kayak paddles).

Still, it did not matter as there were plenty of places to fish and while we stopped for a break, it is a two-mile one-way paddle, we enjoyed the scenery and the exercise. At one point I spooked several large reds and made a note of the place to fish on the way back. 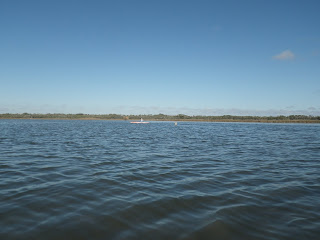 The area we were heading to had undergone several surges from last years hurricanes and the question was, had the structure changed? The answer was unfortunately yes as the channel that usual held fish had filled in with sand and weeds and we drew blanks as we cast to the area.

There were several large open areas of sand and sometimes reds will hold on these pockets. Moving and stopping we fished them but did not have any bites in the shallow water. We did not spot the usual alligators sitting on the shoreline, it was a bit cold. Usually, I use a stringer for any keepers realizing that if we do not carefully watch any fish on a stringer could attract an unwanted toothy thief!

Decid1ng to fish our way back we first stopped at one of the places we had seen fish and anchored. As we fished another boat came in with a tolling motor to the next point. They cast and cast, and we watched as they caught several reds. I kicked myself for not bring any lures, but next time, I will know better!

Paddling further we reached an oyster reef and decided it was a good place for lunch. While we ate Renitas, pole doubled over and was almost pulled out of the pole holder before she could drop her sandwich and set the hook. 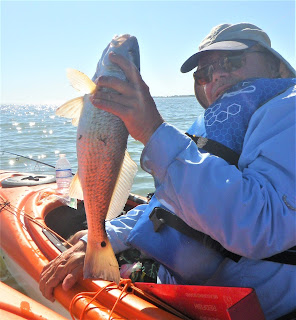 The fish pulled the hook, it was not meant to be, and so she cast back out. It was not long before another fish hit her pole and this time, she landed a red fish that was almost twenty inches long. I had to measure the fish several times to make sure it was short, barely, and I safely released it. Renita mentioned that if we had brought along Botox, we could have made its lip big enough to be legal, (we always laugh when we see the stars with their grotesque Botox injected faces and lips).

Another cast and this time she hooked and landed a legal black drum, our dinner was assured. It was the last bite we had, (I never had any all day). It had been a perfect day for a paddle, with almost no wind or waves, and we were both sore after paddling over four miles.

Next time we will try another cold-water spot, where we have had some great days, in past years. At least we have learned that there is no point in returning to one of our old favorite spots. Clear skies