It has had been a pretty benign winter here in Texas, (until now). The Siberian Express came down from the north and the temperatures plummeted to 18 degrees Fahrenheit. It stared to sleet which later turned to snow but it was still ok. Then the power went off and we had to rely on our battery bank. Now  our rv battery bank was old, and I had bought a back up battery just in case it failed. I also bought a battery charger, which of course does not work when your electricity does not work.

Still, we were ok as long as it did not last too long. We did have a solar cell unit on top of our fifth wheel and as long as the sun was out, we would charge our batteries. Of course, it lasted too long. Now we had two new things to worry about power, and propane. 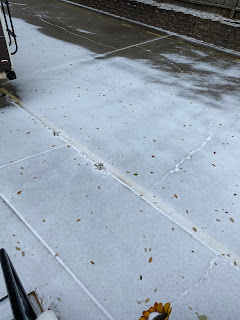 All around us diesel trucks were starting up and jump cables were being attached to rv batteries. That night the constant running trucks kept us awake and at midnight the propane truck came through to fill motor homes. They were not filling up propane bottles.

I had just filled up both of our thirty-pound bottles so we were still ok. Nothing really changed on Tuesday. We lowered our thermostat to fifty-five. Now the game was to keep the rv warm enough so that our pipes and holding tanks would not freeze. Running our insides faucets kept our lines from freezing and we kept our holding tanks open so they would not freeze and crack(hopefully).

It was cold at night and it reminded us when we had last camped in Yellowstone. There our heater did not work as we were at over eight thousand feet in elevation. We were also surrounded by deep snow. 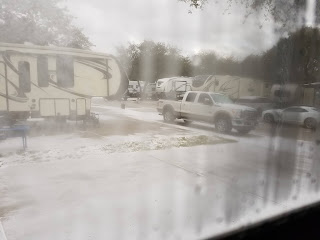 Meanwhile, it was much worse up north of us. Some Texans left their homes to come south to live in their parked campers. Pictures started to circulate of massive fish kills. Big redfish, countless speckled trout, and sheepshead washed up along with black drum. A sea turtle rescue organization started warming up cold stunned Kemp-Riddley and Atlantic green sea turtles. People kept bringing in more and by Thursday over four thousand turtles were inside a convention center, (many would die). 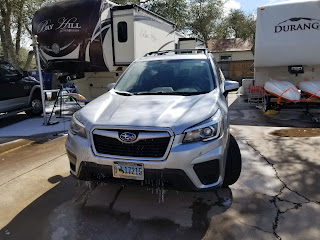 The national news was picking up the story and friends and family started to call, concerned with our plight. We kept telling them we were ok. Running low on gas for the car, all of the gas stations here had gas but did not have power to pump the gas, so we heard that Portland Texas had stations that were open. It was a twenty-five-mile drive and we got lucky to find the local Walmart gas station was open.

Getting in one of the three lines, an hour, and a half later we were able to fill our tank, Now, our concern was propane. There was only one place that had propane and the line was long. The next day I went back early, and the line was even longer. Luckily, our local Ace hardware store was open, they had their own generator, and I was able to fill our empty propane bottle.

Nighttime temperatures were still below freezing, and our battery bank completely failed. We spent a cold night, cuddling works, and the next morning I replaced the bad batteries with a new one! Yesterday the electricity was restored!

Now our major concern is potable water. The city turned the water on yesterday and it just trickled due to the numerous burst pipes. They shut the water off soon after and today it is still off. We do have bottled water and so we are good for now. The temperatures will dip below freezing tonight, but then a warmup! Its supposed to be seventy by Sunday!

All of us here are watching our rigs to see if we have any burst pipes. Stayed tuned and as always, Clear skies!

ps yesterday the water came on for four hours! We are under a boil order for now, but soon!