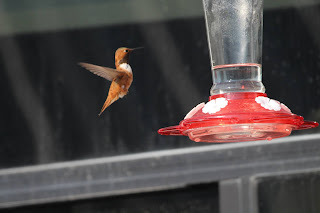 When you think of hummingbirds, you often think of beautiful small birds that meekly live off flower nectar. Birds that are so small that they do not bother anyone or anything. You would be wrong. As they fight at the feeder, they use their bills as lances and attempt to stab each other.

Besides keeping the feeders full we moved on to some must do projects, first of which was to stain and seal the wood of our pergola. 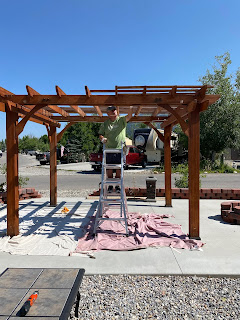 It had been through three winters and it certainly showed the wear and tear. Splitting up the staining chores Renita agreed to stain the cross members while I would do the ladder work. We had thought of using a spray gun, but we are too close to our neighbors, and we worried about over spray and wind drift.

The cross members were easily removed using an electric screwdriver and after placing tarps over our cement patio. we both stained our sections. It ended up only taking us three mornings and we shut down for the hot afternoons. 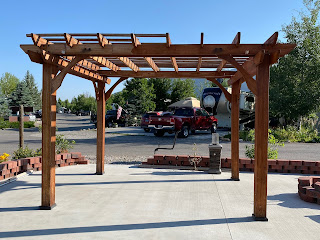 Finally, we were finished, and our neighbors gave us thumbs up. We even got one from the head of our rv park. Now our next task was to fill our orders from the shows, contact the people and mail their jewelry.

While we have been making orders, the hummers keep us entertained especially the bully of our hummingbird world here, a rufous hummer. 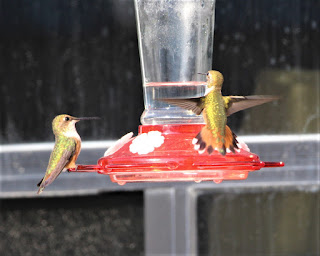 Ruby throated and black chinned hummers would arrive at the feeder only to be chased away by the male rufous. Whenever one stated feeding he would swoop down and threaten and then chase them away. This allowed the other hummingbirds, a chance to sneak in for a drink. 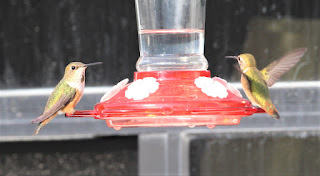 Now the hummers are drinking so much at our one feeder that they drain it in two days. We have never had so much activity, perhaps because the drought has affected the wild mountain flowers.  Two days ago, we got a heavy rain, but it has not helped the smoke as Oregon, Washington, and Idaho remain in a severe drought.

Now we look to the skies and hope for another Monsoon rain. That is how we get our moisture during the summer. Clear skies