Too close for comfort, sometimes you get a surprise! 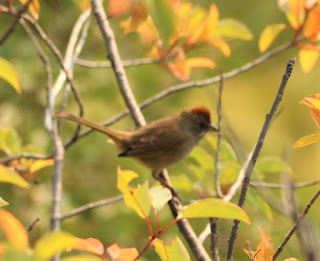 We told our friends about our six-bear day and so two days later they joined us when we returned to the park. Of course, we never saw a bear, but we did see a new bird for us, a green tailed towhee! We now have three hundred and fourteen birds on our life list, since we retired. 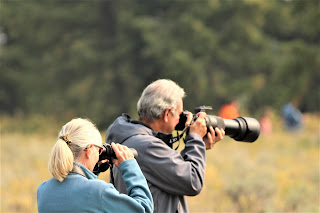 The smoke moved back in, and we stayed inside for the next four days, until a front moved in with rain. It was followed by clear skies, and we headed back to the park. Our friends couldn’t make it, so we hoped for another good day of bear watching.

Arriving at the park we took our favorite road and before long we ran into a bear jam. This time the bear was up a berry tree right next to the road! A Bear management team member was directing traffic and one lane of the road was closed. We drove by and then turned around hoping for a better view. 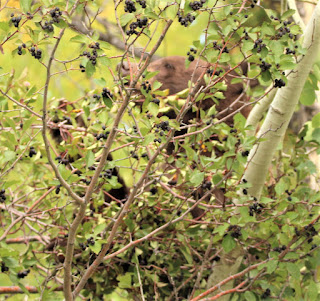 Sure enough, the third time was the charm and we got a good shot of the bear as it pulled down a branch full of berries, giving us a picture of its face. Passing the jamb, we decided to continue on and hike on a closed road where we have spotted bears before.

Starting the hike, we ram into three excited people who told us that they had spotted a sow with a cub. None of them had bear spray and we did mention to them that bear spray was a great idea. They returned to their car, and we continued on making stops on the edge of an overlook where we could see trees full of berries. 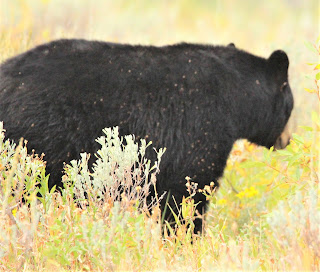 On the fourth peek over the edge, I noticed movement on my right side. It was a black bear boar, a big one that we had seen the week before. It had just topped the ridge next to me and I had no warning. It was so close that I yelled at Renita to stop and get her bear spray ready.

Slowly backing away from the bear, I stopped and watched as it took off running away, it had been way too close. It reached an opening, and I was able to get a couple of pictures. My camera's autofocus had failed and I had to manually focus for each shot. 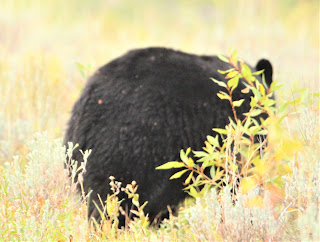 The bear disappeared into some brush, and we headed back to the car talking about our close encounter. We still weren’t done there as a cow moose was feeding in the pond. 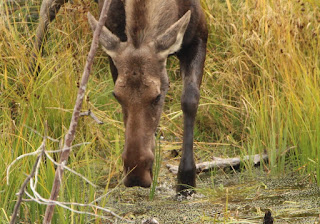 We also got to see its calf which made a quick appearance before going into hiding in some willows. It was lunch time and so we drove to a trailhead where Renita had spotted grizzly bear tracks. 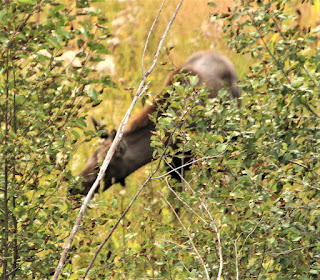 After eating our lunch, we hiked up the trail looking for sign of bear but didn’t spot anything. Talking it over we decided to check out another spot before returning to the first road we had taken. As we drove down the road three members of the bear management team were watching a tree. It was also along the road and as we drove by, we could see leaves shaking.

One of the volunteers told us that there were three bears in the brush, but all could see were black spots and I couldn’t get a clear shot. It really didn’t matter; we had had another great day in the park and had encountered five black bears. Clear skies