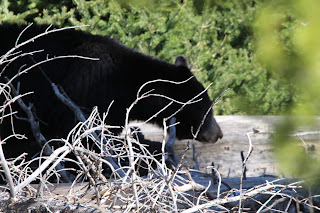 It was Mother’s Day, and Renita wanted to go to the park for a day of bear watching. We had already been to the park twice before and on May 1st had spotted a Grizzly bear at Pilgrim Creek, (or should we say we spotted the bear jam and then the bear).

As we entered the park, we passed several roads and before we saw people getting out of their cars. As we slowly drove past them Renita yelled out black bear and so we found a safe parking spot, (you must be off the road). She took off with our small camera and I carefully changed the lens on our dslr. 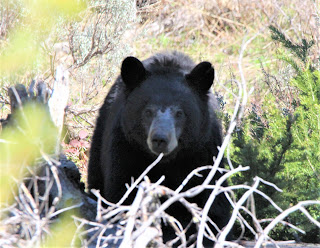 There were not many people to contend with and meeting Renita I cold easily see the black bear. It was in a small clearing on the other side moving but obscured by thick brush. I changed the camera setting to manual and took quite a few shots, but most were out of focus.

Hanging back to automatic I watched as the bear moved past several holes in the brush and I got lucky as the bear stopped and looked at me through one of the holes. The bear was at a safe distance and our new telephoto lens, allows us to take a great picture. Still, it was a little unnerving as the bear was definitely staring at me. 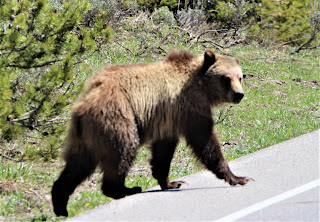 We watched the bear for a little bit longer before we decided to look for another one and made the decision to continue down the road. We had not drove far when we saw other cars stopping and there was a grizzly bear trying to cross the road, (note the claws on the bears front paws. I got a few shots as it crossed and then handed the camera to Renita as the bear was on her side of the car. 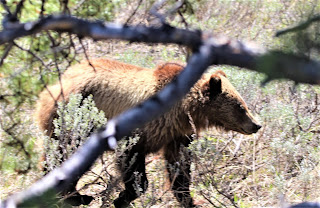 She rolled the window down and, as we were taught in Denali, only stuck the lens out as the grizzly walked past us. It continued on and moved down a hill to a safe distance, (100 Yards). Getting out of the car I moved to the shoulder and took quite a few images as the bear fed. 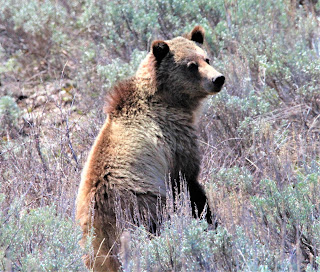 A crowd of people formed, and they started to encroach on the bear. Its hackles, hump, were raised and the bear stood up as if to warn the people that they were encroaching on its space. It worked and the people moved back as the grizzly turned and walked slowly down a small valley.

Cars kept stopping but we decided to continue on to Willow Flats, another spot to watch for bears as elk were moving to the flats to calve, and that always draws hunting bears, (two years ago we watched a grizzly feed and then cache an elk calf that it had just killed). 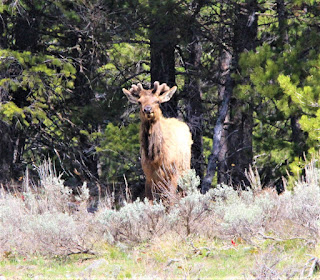 We did spot some elk moving and took some pictures of several bull in velvet. They were just starting to grow this year’s antlers and both bulls seemed to promise a big rack. 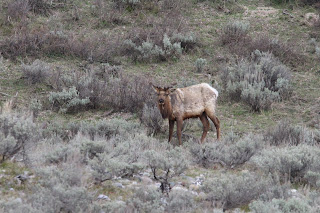 We continued on hoping to catch a glimpse of bear 399 and her four cubs.

There were only four cars at Pilgrim Creek and so we continued on. Again, it was a good decision as a few miles further on another grizzly was feeding on the side of the road. 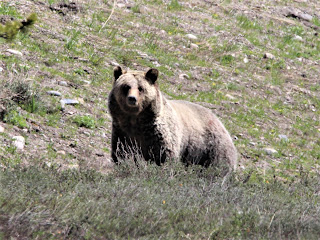 This one wanted to cross the road, but the cars kept coming and the bear was confused.

Finally, the Park Interpreter got the traffic to stop and told the bear to cross the road. 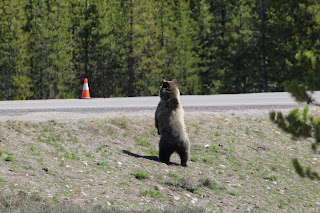 Clapping her hands, the bear finally walked across the road before running into the woods about two hundred yards away. I took a few images, but the bear was so far away that they were to fuzzy and not worth posting. 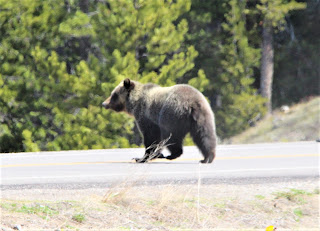 Three different bears in a day is a great day, heck one bear is, and we drove back to Pilgrim Creek. There we parked in one of the spots and had a picnic lunch. After lunch we continued our drive but did not see any more bears. 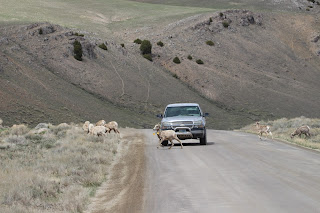 As a last stop Renita wanted to see the Bighorn sheep on the Elk Refuge. It had been forty years since I had been there and then they were only a couple of bighorns on the hill top. 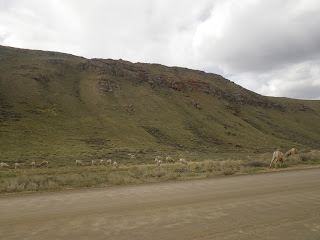 Today they were every where and one almost got hit as a car barely stopped in time as it crossed the road.

We both took lots of pictures and as you can see the Bighorn Sheep. 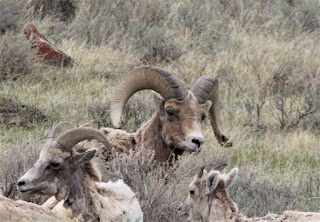 Having parked our car and walked down the road we got close to the sheep, but tried to keep the recommended twenty five yard separation. 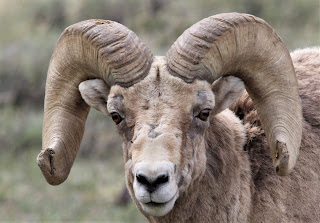 It was another great stop and if you are ever here in May be sure to drive the Elk Refuge Road.

Later we learned that 399 had put in a brief appearance with her four cubs before leading them back into the forest. We never did see bear 610, you may recall or pictures from last year.  We posted pictures of her two-year-old cubs as they fed on Willow Flats.

Word is that she has pushed her “teenage cubs” away and already the male has gotten in trouble. He peered into a window as the owner was eating breakfast and was raiding bird feeders. The young sub adult bear has been trapped, collared, and released on the boundary of Yellowstone National Park.

Now we are finishing up our tasks of unpacking and so it will be a few days before we head back to the park. If you do see a bear, remember to stay one hundred yards away, oh and carry bear spray!